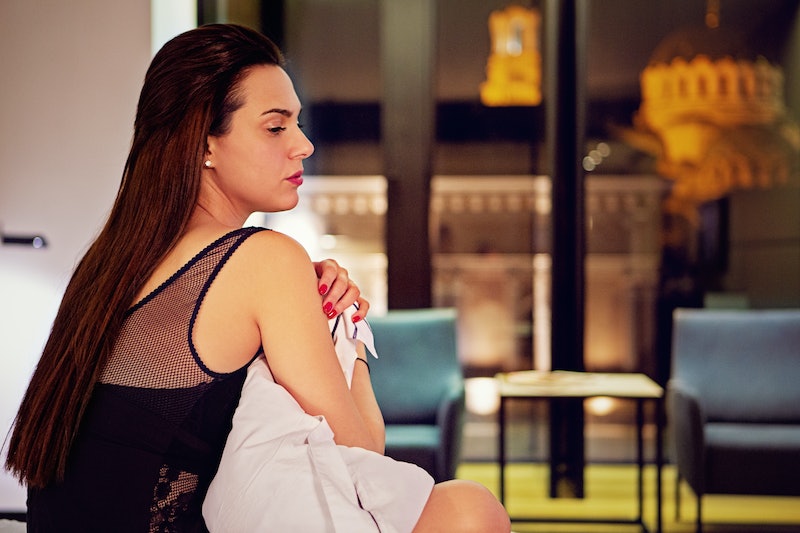 Having a low sex drive isn't always abnormal. You might experience a temporary sex low after a tough week, after you have a baby, or after a big fight. That's totally normal. But there are certain signs your low sex drive might be a problem. What's more, your low sex drive could be a symptom of a bigger health issue... one you shouldn't ignore.

As a former Planned Parenthood Certified Responsible Sexuality Educator and Clinic Manager, I've seen first hand the havoc differing sex drives can wreak on relationships. Not being able to meet your partner's sexual needs can impact your self-esteem, and in the long run, cause relationship problems.

No matter how understanding your partner is, eventually the lack of sex will take its toll. Plus, I'm sure it's no picnic for you. Sex should be one of the best parts of a relationship, and an important aspect of intimacy and closeness, not a constant stumbling block. Not a chore. Not something that makes you feel broken and guilty.

A lot of women I spoke to during my time at PP wanted to have a sex drive and wished things were different. If you're in one of these situation, you can probably relate to some or all of the other signs your low sex drive is a problem

1. You're Fighting About It

When one partner's constantly getting their sex advances shot down, it can be more than an annoyance. It can be a straight shot to the ego. That kind of hurt is the stuff arguments are made of. And those arguments don't really do much good because you probably already know you have a low sex drive and you probably already feel terrible about it and you probably already wish things could be different. If you've already reached this point, you're probably long overdue for a doctor's visit to try to get to the bottom of things. And not just a medical doctor. Low sex drive can be just as much psychological as physiological, according to the Mayo Clinic.

You know your low sex drive is a serious problem and not just a lull when you're not just out of desire for your partner, but you're out of desire, period. You don't get turned on by anything that used to turn you on. You have no interest in sex. You don't even want to masturbate. I'm talking about absolutely zero happening in the desire department. You may not even notice that sexy mail carrier you've been eyeballing for a decade. That's a problem. It could be something with a simple solutions, such as changing a medication or treating an undetected illness. It could be something more complicated, like relationship problems or low self-esteem. It's likely a combination of things that you'll need to address, according to the Mayo Clinic, as low sex drive is a complex problem that can have different causes and solutions for each woman.

If you avoid sex because it hurts, there's actually a silver lining here. I mean, it's absolutely awful that you experience pain, but on the plus side, many of the causes of painful sex, or dyspareunia, can be treated by your doctor. Some women experience painful sex because of untreated infections or injuries. Others have structural problems that complicate sex, according to the Mayo Clinic, that can often be treated with surgery. Pain from sex can also be psychological, tied to trauma, self-esteem, or stress. In the meantime, a patient partner and some creative, gentle forms of stimulation (clitoral, if penetration is the painful part) can give you a romp without the need for an ice pack or an ambulance. Plus, your partner can feel like a part of the solution instead of a part of the problem (or a source of pressure and conflict).

4. Your Sex Drought Has A Reason

If you're really being honest with yourself, is there a reason you're not feeling in the mood? Are you feeling distanced from your partner? Has your self-esteem taken a hit? Do you have suspicions that your partner is being unfaithful? Have the ghosts of relationships past caught up with you? These types of problems will only get worse the longer you refuse to address them. If you can't have a frank convo with your partner yet, a chat with a therapist or even good friend can help you sort out what you're feeling.

5. You're Self-Conscious About It

If your low sex drive has gone on so long that you feel self-conscious about it, then that's obviously a problem. You may feel bad after a temporary lull, but when things grind to a halt to the point that you're feeling terrible, then you know it's time to get some help. If you're embarrassed to tell your friends how long it's been and if you dread going to bed at night because you're worried your partner will reach for you, then it's time to seek treatment or deal with those pesky lingering issues.

6. You Have Desire For Someone Else

Guilt is a powerful sex drive killer. If you have eyes for someone else and you're not facing those feelings, they might be at the heart of your low libido. Having feelings for someone else, believe it or not, is natural and happens from time to time. It doesn't have to mean that your relationship is over. Sometimes just talking things out with your partner is enough to sweep those feelings loose from inside you. Sometimes, though, it means facing that the reason you're not having sex with your partner is because you don't want to. Either way, it's best to be honest.

Some people who have problems with low libido still crave stimulation, and still fantasize, still want to have sex. Their bodies just don't cooperate. They may even have the ability to get turned on, but not the ability to climax. This kind of sexual dysfunction is often caused by medication side effects, or illnesses like diabetes and heart disease that affect blood flow. In some cases, a medical condition called anorgasmia is to blame, according to the Society of Obstetricians and Gynecologists of Canada. Anorgasmia is the inability to achieve orgasm, but it only affects 10 percent of women. Your doctor may be able to create a treatment plan that helps you achieve orgasm, both by treating underlying medical conditions and by taking the time and patience to explore what works for you. This is definitely an aspect of a low sex drive that you should never ignore.

You may have some or all of these problems in your relationship. For most people, sex drives fluctuate through the lifespan, and many sexual problems are solvable. But you can't ever solve a problem that you don't face.