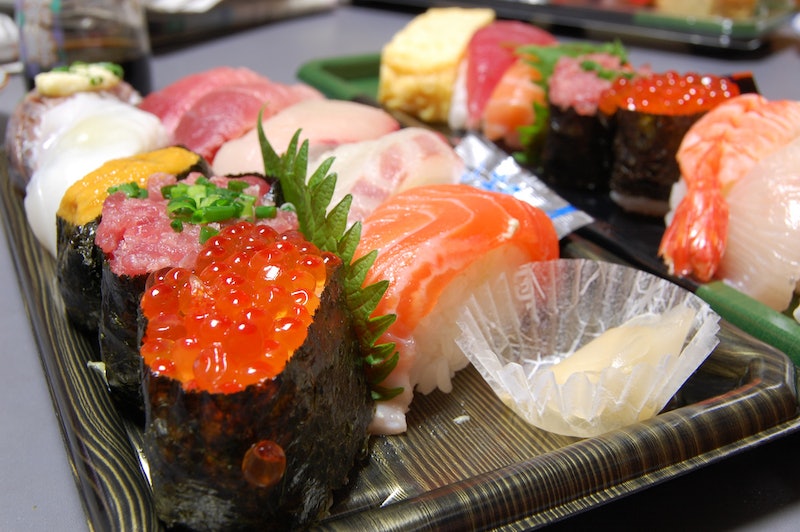 Think you can't love sushi more than you already do? Think again! Women are starting to get seriously in on this traditional Japanese culinary art. Women are beginning to embark on careers as sushi chefs, which is a huge step in and of itself, but one restaurant is leading the pack: Nadeshiko Sushi is staffed entirely by women chef. It's the only sushi restaurant in Japan to do so, making strides towards closing the gender gap in an incredibly important way.

Located in Tokyo’s Akihabara district, Nadeshiko Sushi is run by 29-year-old Yuki Chizui. As the Guardian reports, the restaurant “conforms to the traditional image of a sushi restaurant: a long, lightwood counter, minimalist table settings, and sliding screens.” But rather than the traditional male sushi chef of few words behind the counter, it’s women, all of whom laugh and chat with their customers as they slice, arrange, and roll.

In fact, tradition factors prominently into the art of making sushi, which is historically dominated by men. Some people believe women can't be sushi chefs because menstruation affects their taste. Others believe women's hands are too warm (which would negatively impact the rice), as well as too small (which would negative affect the size of the sushi). But just because something is "tradition" doesn't mean that it can't change — and the women of Nadeshiko Sushi, as well as the many other women who are arriving on the sushi scene, are challenging the sexism inherent in the way things have "traditionally" been.

The vetting process to become a chef is always intense, and the seemingly simple appearance of sushi is deceptive. It takes about 10 years to become a sushi chef in Japan, where you start by learning the proper way to slice sashimi, prepare rice, and (eventually) roll sushi. Since the process is so rooted in tradition, it attracts mostly male students, but women are pursuing careers as sushi chefs at a rapid rate, and that's an awesome thing.

Many of the chefs at Nadeshiko have completed a course at Tokyo Sushi Academy, but Chizui bucks the trend even in her own training: According to the Guardian, she learned her skills on the job at a chain of sushi restaurants, rather than via the traditional route. She opened Nadeshiko five years ago after passing a skills test — and she believes the sushi at her restaurant is proof positive that no matter how you learn, it’s what you learn that matters. “That’s the best way to answer our critics,” she said. “To keep proving to our customers that we can make good sushi."

Nor is sushi the only unexpectedly male-dominated field in which women are increasingly taking the lead. Here are five more examples of it in action:

In spite of the fact that more women than men have tattoos (coming in at about 23 percent of women, and only 19 percent of men), tattoo parlors are often male dominated. It can be tough to find even a single female tattoo artist in a given parlor, but women are starting to lead the pack in a big way. Jackalope Tattoo in Minneapolis, for example, is staffed entirely by female tattoo artists. Sampa Tattoo, in Brazil, is another example of an all-female tattoo parlor, as is the appropriately named Beaver Tattoo in New York.

Only one percent of taxi drivers in NYC are female. Let me repeat that: Only one percent. That's despairingly low, given how many women take cabs in the city. Luckily, women are pioneering their way into the industry, with options like She Taxi, which employs all female drivers and tailoring to the needs of women. For the curious, roughly 14 percent of Uber drivers are women, compared to the 30 percent at Lyft, and 40 percent at Sidecar.

Working on oil rigs is tough, grueling work, often involving long shifts, lots of travel, and tons of physical work. In fact, North Dakota's oil rigs can be deadly for employees. The oil rig culture in North Dakota is so male-dominated, there are "man camps" where men live in en mass, largely due to their relatively low cost and a North Dakota housing shortage.

There's a lot of valid criticism on just how women actually find jobs in such a male dominated culture. Many critics claim, for example, women are more likely to make money peripherally as sex workers or in food and hospitality services than they are on the actual rigs. But many women say that there are opportunities for women to work on the oil rigs themselves, showing that it's not all the boys' club it's traditionally been.

It's no secret that, like other STEM fields, computer science has traditionally been male-dominated — but more and more pushes are being made to get women, as well as other minorities, involved in computers and coding. Efforts to involve women have a big impact in changing women's career paths and encouraging them to pursue computer science in higher education. For instance, less than 20 percent of women earn degrees in computer science.

Women are taking to the air in a big way! While roughly 80 percent of flight attendants are women, that's often where female representation in the air industry ends. But there's been a lot of positive movement on that front, and all-female flight crews are happening as a result. For example, Ethiopia Airlines just commissioned their first all female flight crew, all the way from the maintenance staff to the pilots.