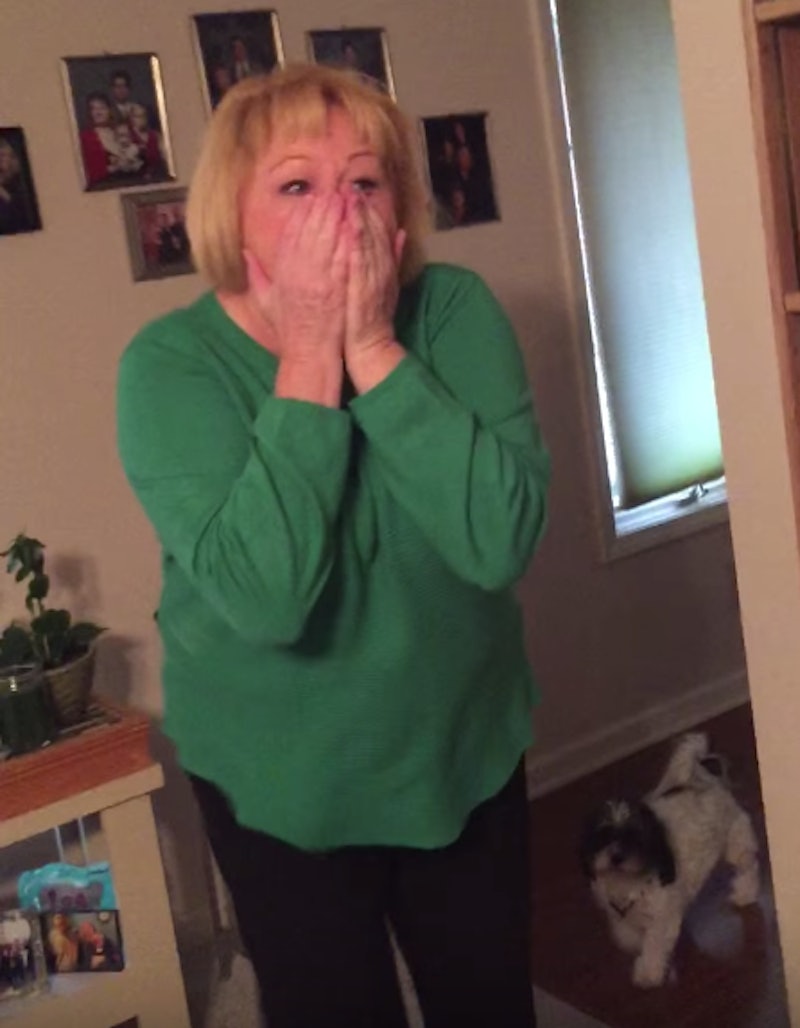 Whether is a reunion video or a proposal video — YouTube is full of clips that will tug at your heartstrings and make you reach for a hanky. After doing the round up of sweet and moving clips to come out over the holidays, this video of a grandma meeting her adopted granddaughter is officially the most heartwarming of the season. One can't help but get wrapped up in her overwhelming excitement and joy when she learns about this new addition to the family.

Eva Goeb of Franklin, Indiana, had no idea she was about to receive the Christmas present of a lifetime. On December 20, not only did she meet her new granddaughter Lily, but she was also reunited for the holidays with her son Donny and his wife, who are in the Air Force. In October, Donny and his wife Miranda had decided that it was time to start a family through adoption. After posting on Facebook, they were contacted with a possible lead.

Lily was born on December 8, 2015, but all extended family was kept in the dark. Going through the emotionally charged adoption process, the couple knew they had to wait until everything was finalized, and then introduce Lily in person. "Our families knew we were planning to adopt and had taken the steps to start the process. We decided to keep the placement a secret from our families because adoption placements can fail," the couple said on their GoFundMe page. After tenuous months of waiting, and putting together the finances, they brought Lily home. The couple count their blessings, adding, "Getting to watch the look on our parent's faces when they meet Lily for the first time is an amazing feeling we will never forget. Lily is blessed to know how much she was loved before she was known." The couple has started a GoFundMe page to raise money to cover the costs of the adoption process.

So just how excited was this new grandmother?

I think she's excited to be a Grandma!

I'll have you know, I made it through this video using only four tissues!

To watch the entire touching experience, check it out here: