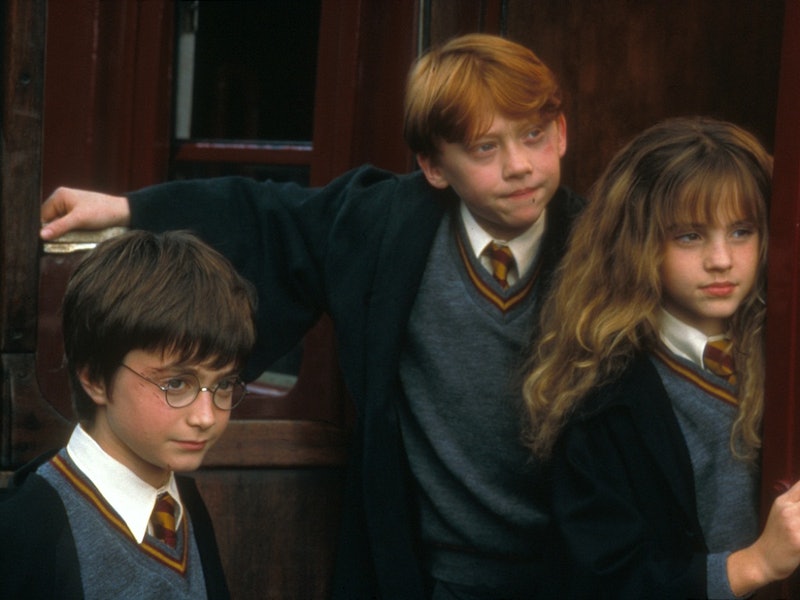 Frodo and Sam. Elizabeth Bennet and Charlotte Lucas. Tom Sawyer and Huck Finn. Harry, Ron, and Hermione. Literature is full of iconic friendships, and at some point or another you’ve probably compared your relationship with your BFF to that of a book friendship. One of my childhood friends and I liked to pretend-spy on our family, and we always argued about which one of us was Harriet and which one of us was Janie from Harriet the Spy. (I was Harriet always.) Nowadays, I usually think of my friendships in terms of what Jane Austen character my BFFs are most like (but I always claim Elizabeth, because I never grew out of calling dibs on the best character).

It’s only natural to relate to friendships in literature, because after all, if you’re a bibliophile, you probably consider the characters in books to be real people, too. So why shouldn’t your life mirror literature? Still, despite the myriad similarities between you and the people on the pages, there are some major differences that crop up when comparing real life relationships and fictional ones. Specifically in a little series called Harry Potter. There are so many intricate friendships in the books, that it’s only natural to compare your friendships to the ones in this iconic series — so let's take a look at how your BFF bond stacks up against the bonds in the wizarding world.

1. In Harry Potter: You Stay Lifelong Friends With Your Grade School BFFs

Harry, Ron, and Hermione meet when they're 11 years old, and they stay friends for life. That's a pretty epic friendship. In real life, grade school friendships often drift apart. And even if you stay close with your childhood friends, chances are you meet a lot of BFFs later in life who widen your circle of acquaintances. Of course, those epic lifelong friendships still exist, but you might not meet at such a young age. Who knows? Maybe your Ron and Hermione are still out there, just waiting to bump into you on the Hogwarts Express (or equivalent meeting place in your life story).

2. In Harry Potter: Your Grade School Friendships Will Probably Morph Into Romance

Sure, high school sweethearts exist. But every single person doesn't marry theirs IRL. In Harry Potter, it seems as if every dang couple meets in grade school and eventually ends up together. In real life, you might meet your Weasley of choice (obviously it'll be a Weasley) later down the road.

3. In Harry Potter: Summer Vacations Are Awful And You Don't Hang Out With Your Friends

IRL: You And Your Friends LOVE Summer

Harry gets to do some fun things in the summer. For example, the Quidditch World Cup. But mostly, he has awful summers: the Dursleys are super mean to him, and sometimes house-elves steal his mail and he thinks his friends have forgotten about him. IRL, you probably don't spend your summers frying Dudley's bacon. And when your friends come to pick you up so you can hang out, they don't come in through the fireplace, or tear bars off your window to free you. Though admittedly the flying car part would be amazing.

4. In Harry Potter: Your Friends Are (Mostly) In The Same Hogwarts House

IRL: You Have Friends In All The Houses

Sure, Harry, Ron, and Hermione had a few friends in other houses. But mostly, they were BFFs with Gryffindors. In real life, you've got friends who like all different houses, and even some who (gasp!) haven't read HP.

5. In Harry Potter: Friends Have Their Ups and Downs

All friendships have their ups and downs, in Harry Potter and in real life. Of course, you probably get into minor disagreements with your BFFs over different things than the HP characters. For example, your friends have never gotten angry because they're wearing a piece of a dark wizard's soul around their neck for too long. But they did borrow and lose your favorite t-shirt, which is also super annoying but you suppose you can forgive them.

6. In Harry Potter: You're BFFs With Your Age Group

IRL: Post-High School, You Have Friends Of Different Ages

A lot of the friend groups in the Harry Potter series are comprised of friends who are all the same age: Harry, Ron, Hermione. Sirius, Remus, and James. Lily and Snape. IRL, you have friends of all ages, especially post-high school.

7. In Harry Potter: You Pretty Much Just Hang Out With One Friend Group

Harry, Ron, and Hermione were pretty exclusive. Personally, if I had attended Hogwarts with them, I would have been super jealous of their clique. IRL, some people exude #SquadGoals. Others prefer hanging out with a wide variety of acquaintances.

8. In Harry Potter: You Know Everybody

IRL: You Meet New People Every Now And Then

Think about how many people actually attend Hogwarts. It's an extremely small school! And honestly, the wizarding community as a whole has got to be fairly little. I imagine it's like a small town: everyone knows everyone, and everyone knows everyone's business. IRL, if you're not in a Hogwarts-size community, you probably meet new people every now and then. And those people aren't somehow connected to all of your friends and/or family in significant ways.

9. In Harry Potter: You Defeat A Deadly Villain Together

IRL: You Read About Defeating Deadly Villains Together

Harry, Ron, and Hermione are the perfect team because they balance one another's strengths and weaknesses. They fight evil together — after all, the incident which first cements their friendship involves knocking out a mountain troll. IRL, maybe you didn't meet your BFFs in such a dramatic fashion, but you're the one who gave them their first copy of Harry Potter and the Sorcerer's Stone. And that sort of counts.

10. In Harry Potter: You'd Do Anything For Them

When it comes down to it, Harry Potter friendships may as well be friendships IRL. Because the most important thing is that in both cases, you love your friends, and you'd do anything for them.