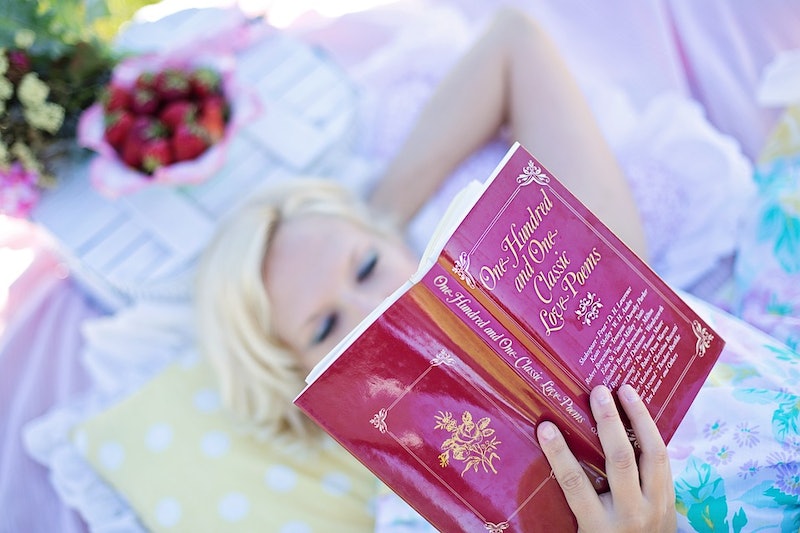 Poetry isn't always the most straightforward style of writing. Anyone who ever studied poetry in a high school English class can probably remember at least one moment of staring blankly at the page while the teacher explained some obscure reference that the poet in question was making. So the raven is a symbol of satanic evil? Um, OK... if you say so... Poems bring us some of the most beautiful turns of phrase, but also some of the most confusing. So it's no wonder that so many poems aren't quite what they seem.

Yeah, it turns out there are quite a lot of poems about sex. Like, almost anytime there's flower imagery in a poem... they're not really talking about bees pollinating daisies. And most of the time, anything about fire or heat is referring to... well, you know. Also any references to water. Or air. Ok, poets can find a way to make almost anything about sex if they really set their minds to it. You might remember some of these poems from high school or college, but you might not have picked up on every dirty detail of what they're really talking about. So, if you need a reminder that most poets are incredibly horny as well as incredibly moody, here are some choice poems that are more seductive than you ever realized:

As the fainting bee, Reaching late his flower, Round her chamber hums, Counts his nectars --enters, And is lost in balms!

Bees, man. Bees and flowers in poems are never really bees and flowers. Also, you can safely assume that if a poem includes the word "enters," it's a PG-13 rated poem at the least. Emily Dickinson may have a reputation as a mild-mannered recluse, but that doesn't mean she didn't include strong themes of love and erotica throughout all her poetry. Always watch out for the quiet ones.

2. "Putting in The Seed" by Robert Frost

The sturdy seedling with arched body comesShouldering its way and shedding the earth crumbs.

Ok, you know what? I'm just going to say it: all references to plants in poems are actually about sex. Flowers, bees, seeds — it's all sex. Maybe poets just find plants irresistibly sexy? Robert Frost is best known for writing the oft quoted poem The Road Not Taken, but he also wrote about "seeds." And "putting in seeds." And "arched bodies." Yeah... in retrospect it's not even very subtle.

3. "I Sing the Body Electric" by Walt Whitman

A divine nimbus exhales from it from head to foot,

It attracts with fierce undeniable attraction,

I am drawn by its breath as if I were no more than a helpless vapor, all falls aside but myself and it

Walt Whitman was a pretty touchy-feely guy, and most people have figured out by now that "I Sing the Body Electric" has at least something to do with sex. I mean, he's talking a lot about bodies. And... electricity. But you still may have missed some of the dimensions of sexuality that Whitman is exploring: He's saying that the human body and bodily pleasures are every bit as divine as the human soul, and that the male and female bodies are equal in form and desirability. Aww, Walt. What a charmer.

My candle burns at both ends;

It will not last the night;

It gives a lovely light!

Edna St. Vincent Millay has quite a few explicitly sexual poems to her name. But even her less scandalous poems reference her sexually active lifestyle: Millay was bisexual, polyamorous, and a feminist activist, and it shows. This poem in particular refers to her partying and wild affairs as "burning the candle at both ends," and that she knows it won't last forever. But boy is it fun while it lasts!

5. "In Adoration" by Sappho

Speechless I gaze: the flame withinRuns swift o'er all my quivering skin:My eyeballs swim; with dizzy dinMy brain reels round;

Sappho is one of the great poets of the ancient world. She was also the original lesbian — she lived on the Isle of Lesbos and wrote love poetry to women, and term lesbian is still used today in tribute to her. That's how influential Sappho's sexy poetry was. Unfortunately, many of her poems were translated by straight-laced scholars over the years, who tried their best to suck all the homo-eroticism out of her verses. If you read some of the more recent translations, though, it's pretty obvious that Sappho loved writing about ladies in an openly sexual connotation.

Mad in pursuit, and in possession so,

Had, having, and in quest to have, extreme;

A bliss in proof, and proved, a very woe;

Before, a joy proposed; behind, a dream.

Shakespeare wrote a lot about sex. He just has such a highbrow reputation these days, that sometimes it's hard to remember that he was considered lowbrow in his own time. His plays and sonnets are riddled with innuendo, but "Sonnet 129" is especially vague in talking about physical love. He only mentions lust once, but the rest of the poem is about pursuing and then having and then kind of regretting and feeling ashamed of what you've had. Really, he's talking about sex that seems like a good idea before the fact, but then turns out to have been a very bad idea. We've all had nights like that, Shakespeare.

7. "To a Dark Moses" by Lucille Clifton

OK, let's add burning bushes and snakes to the list of things that are actually about sex. Because on the one hand, this is a poem about Moses from the Bible. And on the other hand... it's about having sex with Moses from the Bible (or a guy who is being represented by Moses). This poem is brief, but it manages to hit almost every major sexual innuendo used in poetry, with some bonus steamy biblical imagery. Hey, everybody's got their thing.