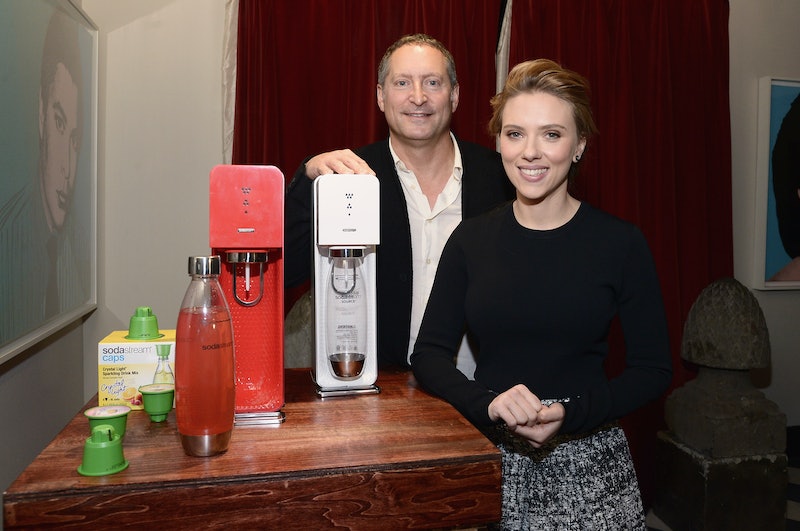 Scarlett Johansson is facing backlash over her latest brand endorsement: SodaStream. Which is confusing, since SodaStream appears to offer one of the most harmless products you can imagine, turning water into carbonated soft drinks that come in flavors like "fountain mist" and "ocean spray." On top of the aesthetic and taste, the brand is also concerned with environmental friendliness. Sounds harmless enough. But as it turns out, the politics behind SodaStream are much more complicated.

SodaStream is an Israeli beverage company — and with that fact alone, you can expect that some people will have an issue with it. While the U.S. and Israel may be close allies, many other nations have shaky relations with Israel, and even the U.N. has often been accused of having an anti-Israel bias. One of the most prevalent movements against Israel, and specifically its occupation of the West Bank, is BDS — an acronymic for Boycott, Divestment, and Sanctions.

SodaStream is particularly controversial because its manufacturing plant is located in what Al Jazeera America calls "an illegal Israeli settlement in the occupied West Bank," and what New York magazine calls "occupied territory in the West Bank." Cue the controversy: BDS supporters weren't happy with Johansson's support of SodaStream, and accused her of supporting "Israeli Apartheid."

As SodaStream's first-ever global brand ambassador, Johannson (who is herself Jewish) brings a higher profile to the brand — especially now that SodaStream is expected to air an ad with her at the Super Bowl.

"My favorite thing about SodaStream is that I don’t feel guilty when I enjoy beverages at home," Johansson says. (Because celebrities are always feeling guilty about buying Diet Cokes?)

Contrast that with a propaganda video against SodaStream, asking viewers to boycott the product. Note that the footage below has not been verified:

Not everyone agrees that there should be a controversy over this. Over at Daily Beast, reporter Nina Strochlic said she felt the media has blown the BDS opposition to SodaStream out of proportion, penning an article headlined, "Al Jazeera's Puny Controversy Over Scarlett Johansson and SodaStream."

Amid the dozens of articles about Johansson's partnership with the fizzy water company, there was virtually no mention of a bubbling critical movement.

“Actress Scarlett Johansson is catching heat for her recent partnership with Israeli beverage company SodaStream,” the article reads, citing nothing but four tweets as evidence of this growing controversy. The angry tweeters, two Canadian postal workers, one author, also Canadian, and one user whose last post was a retweet of Iranian President Hassan Rouhani, were apparently enough to build an article.

So far, the only ones really creating the backlash are BDS supporters, although the progressive-minded Jewish Daily Forward has said:

While she’s openly gunning for former Secretary of State Hillary Clinton for 2016, Johansson would do well to realize that “normalizing” the Israeli occupation is a bad use of her celebrity.

Incidentally, as of Jan. 14 last week, stocks for SodaStream have fallen 26 percent — the biggest decline the company has faced since Aug. 2011.