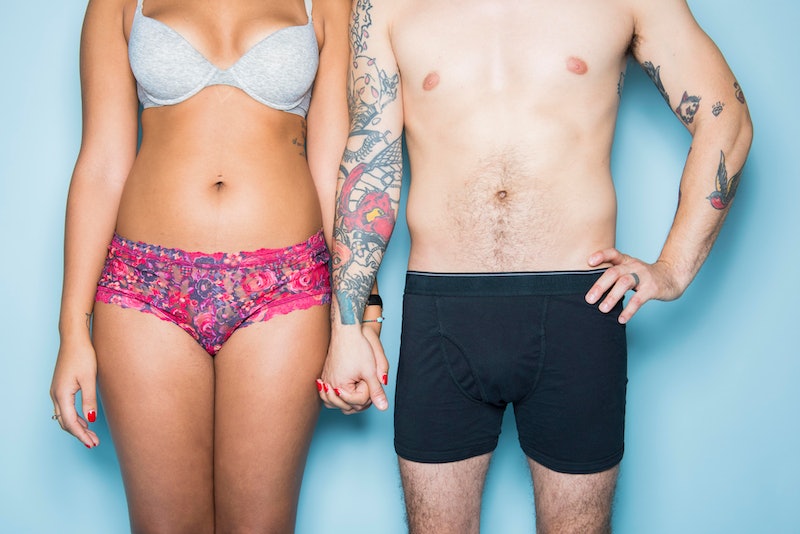 Have you ever wondered what the best time of day to have sex is? According to conventional wisdom, it's at night before bed, but that's not what hormone expert and author of WomanCode Alissa Vitti thinks. She recently spoke with the Daily Mail on the subject, and by her reckoning, the best time of day for sex is actually 3 p.m. Good news for people who ascribe to the whole "afternoon delight" school of thought, no?

Vitti derived her answer by looking at both men and women's individual needs and figuring out the specific time when both of them were the most likely to be satisfied. According to Vitti, men have higher levels of estrogen in the afternoon, which makes them more emotionally available; meanwhile women have elevated levels of the stress hormone cortisol at the same time of day, which causes our energy levels to spike. Interesting stuff, right?

We usually think of testosterone as being the hormone driver for sex, since sex causes testosterone levels to rise and creates sexual desire. But Vitti doesn't see it that way: Since while testosterone is responsible for our sex drive, she believes it doesn't leave room for the emotional intimacy that women need to be satisfied. "While this may not seem like a logical set-up for satisfaction, given the previous endorsement of testosterone, the combination [of oestrogen and cortisol] actually makes men more emotionally present during sex and better able to focus on (a woman’s) needs and satisfaction," Vitti said to the Daily Mail.

Ideally, we should all schedule a mid-day siesta to go home and get it on the bedroom with our partners then, right? Well, we all know that we don't live in a perfect world where this is possible; most of us are probably behind our desks or in stuck in meetings at 3 p.m. Fortunately, though, there's some good news for those of us who can't sneak away for an afternoon quickie. First, Vitti's perspective is also for that of a straight couple, so keep in mind that this advice may not hold true for same-sex couples; and second, most sex research has actually pointed to the morning as the best time to have sex.

For example, sex therapist Arlene Goldman, Ph.D. told Cosmopolitan in 2011 that because testosterone peaks in the morning, it's good to go with the flow. "When a man has higher testosterone and is well-rested, he has more energy during sex. ...That energy will help him last longer," she said. Meanwhile, research published in the British Medical Journal found that sunlight boosts testosterone production in the hypothalamus, which is likely to make us horny, making the morning a good time to have sex. On top of that, women's endorphin levels reach their peak between 8 a.m. and 10 a.m., which usually makes sex more pleasurable. Sex therapist Suzie Hayman also told the Daily Mail that having sex in the morning is the best due to both partners being "fully rested, with heightened senses." Oh, and apparently, it's also the best time of day to conceive if you're looking to get pregnant, as well as when you're most likely to orgasm.

So, don't sweat it if you can't pull off a 3 p.m. romp in the hay. You're probably going to have the best sex when you're relaxed, at ease, and actually have the time and energy to enjoy the experience, no matter what time of day it is. As Vitti also emphasized, the key for couples to have a fulfilling sex life is to compromise on their needs and find a time that's going to work for both of you — whether that's at 3 p.m., 7 a.m., or anywhere else in between.