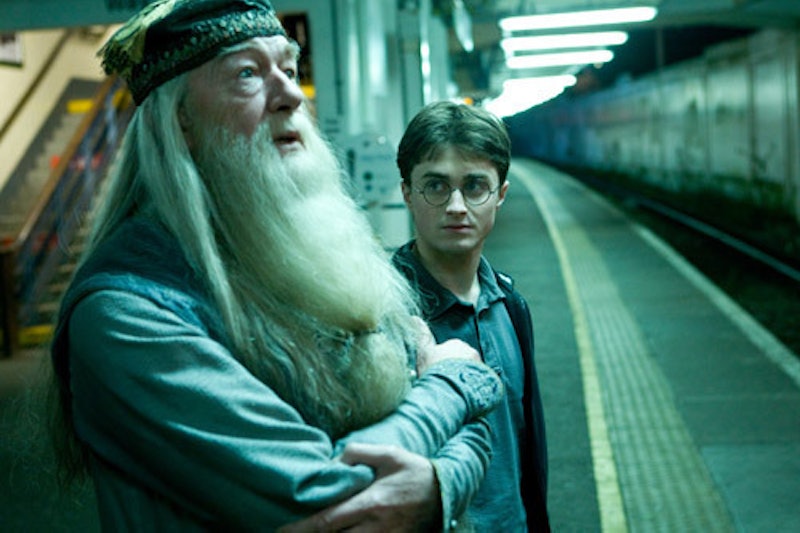 Part of the fun of reading (and re-reading, and re-re-reading) the Harry Potter series is to pick up on all those little details that you might have missed the first time around. It's one of the many reasons we love J.K. Rowling: She's a master of hints and using Harry Potter quotes for foreshadowing. She knew where she was going with those books, and she left some tantalizing clues that we never realized would become important later on. Like when Harry and company find Voldemort's horcrux locket when they're cleaning out Grimmauld place and they just toss it aside? Or when Dumbledore just casually mentions that he has a wacky, goat-loving brother? Or how love potion smells like Ginny's perfume to Harry? Those books are full of wonderful little details that come back in a major way.

Even if you think you know the wizarding world inside and out, it never hurts to remember just how well-constructed that series is, and how many innocuous Harry Potter quotes turned out to be key parts of the plot. Many of these quotes double as world-building or character development as well, so we just accepted them as details of the Harry Potter universe and never gave them a second thought. Until we looked back and realized how hugely important they really are

1. "Scars can come in handy. I have one myself above my left knee that is a perfect map of the London Underground."

2. Harry didn’t see how he could — yet he sometimes had the horrible feeling that Snape could read minds.

Baby Harry knows what's up with Snape from day ONE. Because Snape is into legilimency, which is the wizard version of mind-reading. But the readers don't get clued into the fact that Snape totally can read minds for another couple of books. Trust your gut, baby Harry.

You've got to love a girl who knows exactly what she wants. Fleur is eyeing Bill in book four, and marrying him in book seven. If you thought their relationship came out of left field, guess again: Fleur knew exactly what she was doing from the start.

4. "Hmm," said Mr. Ollivander, "this is a Gregorovich creation, unless I’m much mistaken? A fine wandmaker, though the styling is never quite what I… however…"

J.K. Rowling keeps the three hallows under wraps until book seven, but she drops quite a few hints about wand-lore throughout the books. This quote doesn't give anything away, but it quietly establishes a European wand-maker who is going to feature in the plot later on.

5. The lake froze solid and the Weasley twins were punished for bewitching several snowballs so that they followed Quirrell around, bouncing off the back of his turban.

Are Fred and George bouncing snowballs off of Voldemort's face? Yes. Yes, they are. That is exactly what they're doing. What a beautiful moment.

6. "You haff a water beetle in your hair, Herm-own-ninny," said Krum.

Not only is this an adorable moment of Viktor Krum vying for Hermione's attention (and butchering her name), it's an appearance of secret animagus Rita Skeeter. Hermione puts the pieces together eventually, but in the moment it just seems like any old non-magical beetle.

7. "I wouldn’t mind knowing how Riddle got an award for special services to Hogwarts either." "Could’ve been anything," said Ron. "Maybe he got thirty O.W.L.s or saved a teacher from the giant squid. Maybe he murdered Myrtle; that would’ve done everyone a favor…"

Tom Riddle totally did kill Moaning Myrtle. And Ron is surprisingly good and accidentally getting everything right.

8. “Right,” said Harry, crumpling up his first attempt and lobbing it over the heads of a group of chattering first years into the fire. “Okay… on Monday, I will be in danger of- er - burns.”“Yeah, you will be,” said Ron darkly, “we’re seeing the skrewts again on Monday. Okay, Tuesday, I’ll… erm…”“Lose a treasured possession,” said Harry, who was flicking through Unfogging the Future for ideas.“Good one,” said Ron, copying it down. “Because of… erm… Mercury. Why don’t you get stabbed in the back by someone you thought was a friend?”

OK, this one is a bit of a stretch, but it's so cool that it can't be left out: Harry and Ron's three bogus predictions match up perfectly with the three Triwizard Tournament challenges. There's "being in danger of burns" (the dragon), "losing a treasured possession" (Ron is kidnapped by merpeople), and "being stabbed in the back by a friend" (Mad-Eye Moody turns out to be an impostor).

9. The Hog’s Head bar comprised one small, dingy, and very dirty room that smelled strongly of something that might have been goats.

Remember how Dumbledore mentioned vaguely that his brother had a weird relationship with goats? We don't find out that the other Dumbledore runs the Hog's Head for a while yet, but as soon as Harry steps inside it smells like goats. That's some high-level hinting.

10. Harry saw something silvery dart out of it and streak away through the trees like a ghostly bird.

11. Aunt Petunia looked quite appalled with herself. She glanced at Uncle Vernon in fearful apology, then lowered her hand slightly to reveal her horsy teeth. “I heard — that awful boy — telling her about them — years ago,” she said jerkily.

Aunt Petunia remembers hearing about dementors long ago, when she heard "that awful boy" telling Lily about them. Harry assumes she means James, and gets all huffy about it. But, after reading the seventh book, it's clear that Petunia probably means little Severus Snape when she says "that awful boy." Oh, little Snape. Always trying to get girls to like you by talking about dementors.

12. “There’s one — the Cruciatus Curse,” said Neville in a small but distinct voice. Moody was looking very intently at Neville, this time with both eyes.

Neville knows what the Cruciatus Curse is because it's the curse that tortured his parents into madness. Yeah. I'm crying, too.

13. "I took a wrong turn on the way to the bathroom and found myself in a beautifully proportioned room I had never seen before, containing a really rather magnificent collection of chamber pots. When I went back to investigate more closely, I discovered that the room had vanished. But I must keep an eye out for it. Possibly it is only accessible at five thirty in the morning. Or it may only appear at the quarter moon — or when the seeker has an exceptionally full bladder."

Good old Dumbledore, dropping esoteric bits of information and then not explaining anything. He is, of course, talking about the Room of Requirement, which turns out to be quite important in the next three books. But, being Dumbledore, he has to make it into a joke about chamber pots. Classic.