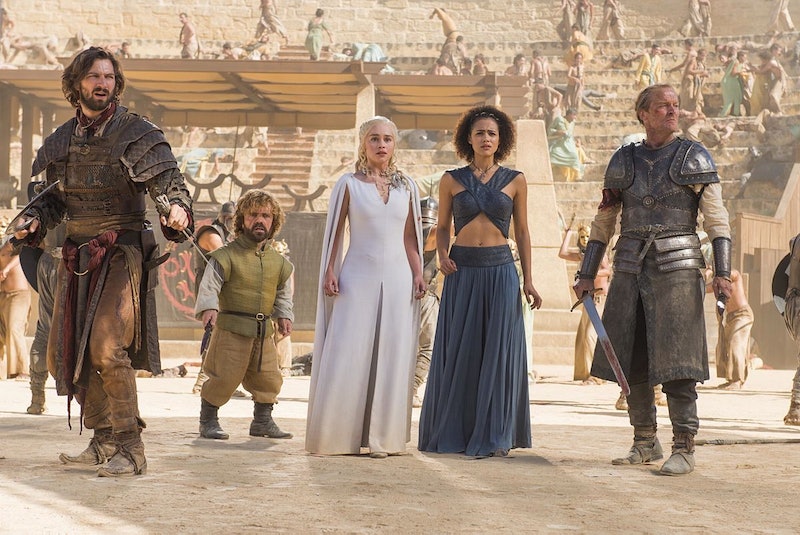 It's no secret that Season 5 of Game of Thrones wasn't particularly kind to anyone, especially its audience. Beloved characters were slain, publicly shamed, assaulted, blinded, and stranded in faraway lands. The series reached a whole new level of grim despair — so much so that the show’s creative team have announced plans to lessen the amount of sexual violence in future seasons. GoT has always been dark and full of violence, but it used to be balanced out with a sense of hope — but, as the seasons have gone on and all the remotely good-hearted characters have been killed off, that hope has begun to dwindle. So, it’s easy to see how fans are hoping that Season 6 will be a bit better for the people of Westeros. And there are a lot of ways Season 6 of GoT can be best case scenario for all our beloved characters.

Season 5, like previous seasons, ended with all the main characters in peril. No one seemed safe. Season 6 will mark the first season that goes beyond the book series, which it has followed fairly loyally up until this point. That means this is the first time that the show’s writers are completely on their own and can determine the fate of the seven kingdoms. With that in mind, let’s ponder the best case scenarios for the upcoming season.

1. Jon Snow Isn't Dead After All

Obviously, the best of the best case scenarios would be that Jon Snow somehow survives being stabbed a dozen times and lives to fight another day! I don't care whether it's through Melisandre's fire voodoo or whatever — if Jon is alive, it's going to be a good season. (He's probably not though. At least, not yet.)

Sansa and Theon have probably have the worst lives out of any character on GoT. They've both been tortured and abused in every way possible. The end of last season made it seem like they may just escape though, let's hope these two get a little vacay from Ramsay Bolton.

Daenerys went from being a beloved Khaleesi to a hated ruler fighting off rebels in Season 5. I'm not saying ruling all those kingdoms is easy, but let's hope our girl gets a better handle on things next season. If she can't rule these people, how is she ever going to take over Westeros?

Like everyone else, Arya had a rough go of it last season. She made her way to the House of Black and White, but things were just as difficult for her there as they had been in the Seven Kingdoms. The season ended with Arya's vision being taken away — but, maybe it's just temporary?

Ramsay is the pinnacle of evil, the worst of the worst. Given recent pleas that the next season feature less sexual violence, maybe that will mean less Ramsay too. So many characters that people like get killed, while the ones everyone hates stick around season after season. Let's mix it up a bit, yeah?

6. Margaery Wins For Once

Margaery never wins — like, once Renly died, it's sort of been all downhill. Everytime it seems like she's got the upper hand, some new horror befalls her. During Season 6, maybe things can brighten up for Margaery and she can finally be on top, even if it's just for an episode or two.

Tyrion is the moral center of GoT, and I can honestly say that I would definitely watch a spinoff series that's just about him and his adventures. More Tyrion is always a good thing — so, more Tyrion please.

Season 6 of Game of Thrones premieres in April on HBO.