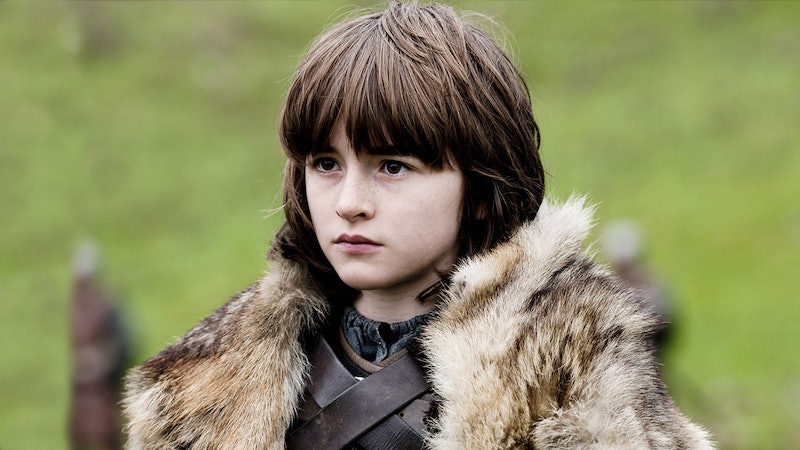 Bran Stark is most definitely the type of person I would want on my side during an apocalypse. And let's be real here: something Apocalypse-worthy is about to go down in Westeros in Season 6 of Game of Thrones. There are dead Jon Snows, and shamed Cersei Lannisters, and White Walkers howling at the door. For those of us desperate to receive any taste of news, I must let you know it was confirmed we will get to see Bran in Game of Thrones Season 6 (how we missed him Season 5) when Isaac Hempstead White was seen on set.

Bran's got the warg (basically quantum leaping into someone or something else) skills, and the ability to see the past. He can control people's bodies, which is both terrifying and amazing. With such power, it is important to make sure the carrier is well-rounded and doesn't turn into a sociopath. I hope that Bran keeps on being cool. In fact, I hope that Bran ends up using his powers to save the day. I am concerned my hopes are in vain because I've seen the entire Buffy The Vampire Slayer series multiple times, and I know that power corrupts because it is an addictive substance. So, if you are as worried as I am, take my hand and look through this list of theories and hints about what's going to go on with Bran in Season 6 and beyond.

1. Bran Is A Time-Warping Quantum Leaper

Well, we're starting this list out with a whopper. This idea is based on the fact that Bran tumbled down from the top of a castle and was unable to walk, and yet was soon able to become very powerful magically. He developed the skills of being able to see the past (at least of his father, Ned Stark) and hopping into people's minds and controlling them. Well, what if Bran, living in a world taken over by White Walkers, decides to go back into the future and control someone's brain through a quantum leap. And Bran took over Jaime's buddy and pushed himself out the window, which was a domino effect for all the events that took place after? Ouch. Does anybody else need an Advil?

2. Bran Will Be Crucial To The Season 6 Arc

Isaac Hempstead Wright confirmed in an interview with Entertainment Weekly that Bran could perhaps be crucial to what happens in the show starting Season 6.

Previously Bran’s seen tiny glimpses of future or past but never has he been very much in control in the situation. Now we’re given looks into very important events in the past, present and future of this world and Bran is beginning to piece them together like a detective, almost as if he’s watching the show. Equally, he’s now discovering how crucial he could be in the Great War. It’s quite Inception-y.

3. Bran Will Save Jon Snow's Life

We were all horribly sad when it looked as if the cutest brother on the Night Watch was now the deadest. Well, in this theory, Bran sees Jon Snow dying through his mind's eye and hops into Jeor Mormont's raven to help out. He will then help his semi-warg brother squeeze into Ghost, the pup who, in A Dance With Dragons, was the last thing Jon thought of as he died. Then Melisandre will do the rest.

George R.R Martin did a Drunk History episode on Comedy Central, where he explained the entire plotline, and we all know what's going to happen, and it's great. Just kidding. I wish. But actually what happened is Waterstones released Martin's original storyline synopsis. Interestingly, Bran is one of the few characters whose original storyline has not changed.

5. Coldhands Is Definitely Not Benjen Stark

Coldhands hasn't appeared in the show yet (which has infuriated some fans), but he is the icy man who helps Bran travel to the North. He may or may not be a missing in action member of the Night's Watch. But George R.R Martin is pretty sure he's not Benjen Stark.

6. Bran And Four Other Characters Will Survive

In the above-mentioned leaked storyline from Waterstones, R.R Martin also says that Bran, along with Daenerys, Arya, Jon, and Tyrion, are the five characters that will survive. However, knowing how much George R.R loves killing people I love, I'm not sure I trust it.

7. Bran Stark Is The Anti-Christ

I don't even like to write this one because it seems whacky and zany with just a dash of fun. The idea is that the Children of the Forest are super evil and not the Others. Oh, and that Bran is "The Great Other," who is essentially an anti-christ. Not thank you, heresy fan theorists, I will not have what she is having.