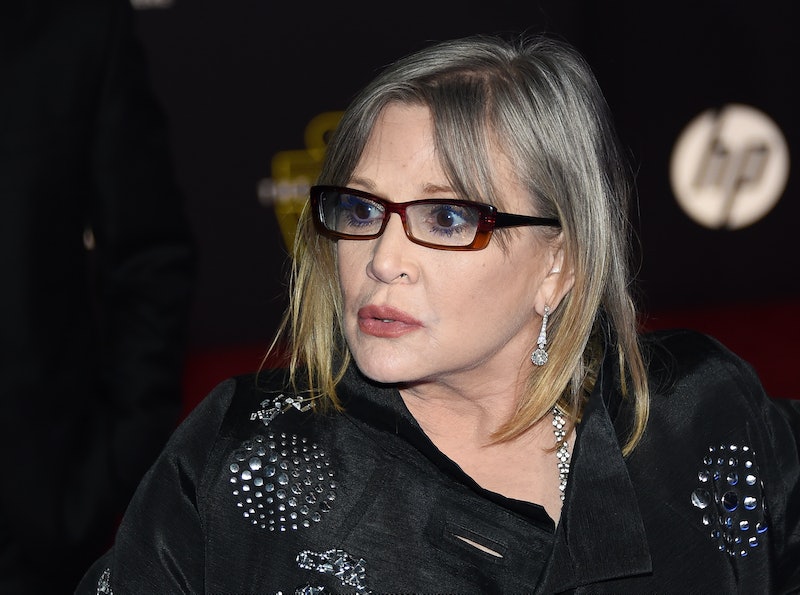 In part because of the recent premiere of Star Wars: Episode VII — The Force Awakens, interviews with Carrie Fisher have been plentiful. And thank the goddess for that, because what the world needs today is more Carrie Fisher. Carrie has always been on my radar: she's a incredibly multi-faceted woman and an amazing actress who speaks out about anything and everything — she's the definition of a #queen. But the best part of Fisher's presence this round of Star Wars is something new — and no, I'm not going to say Gary, her alien-like French Bulldog (I can't get enough of that weird little martian face!). Actually, it's the very real truth that Carrie Fisher has proved herself to be a body positive champion.

Case-in-point: In response to those criticizing her on Twitter for her appearance in Star Wars (which, by the way, warranted no criticism — she was looking FIERCE), Fisher fired off a series of tweets indicating that she accepts that her body is aging — as normal human bodies do — and so should everyone else.

Honestly, my favorite part of this all is the sense of humor and self awareness she adopts with each interview and retaliation: I love a girl that laughs at herself. This characteristic makes her my choice for my favorite Body Positive Champion of 2015. With these examples, you too can understand why.

1. She Shot Down Discussion Of Her Weight

In the sweetest way ever, Carrie Fisher refused to discuss her own weight during an interview, because it's her body, and she doesn't have to answer to anyone. Gary the dog was present. It was all majestic.

In the BEST way possible, too. Hi, Gary!

3. She Had Insightful Thoughts On The Slave Costume

In an interview with Rolling Stone in 1981, Fisher spoke about how she felt about the slave costume that she was made to wear as enslaved Princess Leia. She said,

“In Return of the Jedi, she gets to be more feminine, more supportive, more affectionate. But let’s not forget that these movies are basically boys’ fantasies. So the other way they made her more female in this one was to have her take off her clothes.”

4. She Told Daisy Ridley To Fight The Slave Costume

Because of her feelings about the slave costume, Fisher told Daisy Ridley, who portrays Rey in the franchise, to stay away from letting the franchise do the same sort of thing to the young The Force Awakens star. This in an interview with Interview, in which Fisher interviewed Ridley. Adorable.

I hope when I'm 59, I have even half as much as the spunk and all around badassery as Fisher possesses. She is clearly a true queen and general — she doesn't just play one on screen. I would follow her onto any Death Star. Any.

More like this
UK Viewers Will Have To Wait To Watch The Handmaid’s Tale S5
By Maxine Harrison
Lin-Manuel Miranda & Tituss Burgess React To 'Little Mermaid' Casting Backlash
By Radhika Menon
‘RHOSLC’ Star Jen Shah’s Arrest & Legal Drama, Explained
By Brad Witter and Jake Viswanath
Twitter Is Unravelling Over Wolverine’s Return For 'Deadpool 3'
By Darshita Goyal
Get Even More From Bustle — Sign Up For The Newsletter