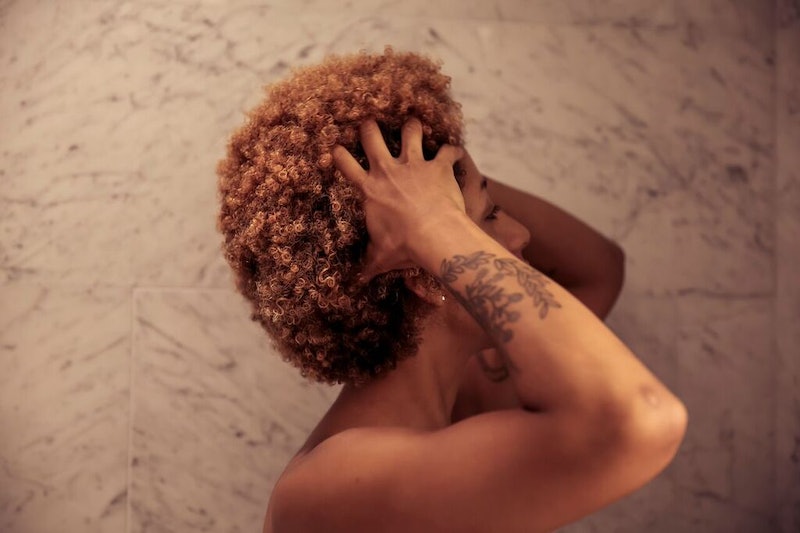 When it comes to personal hygiene, most of us can agree that showering regularly is an important part of life. But when it comes to the details of what time of day and how often you should shower, the debate can get a little heated. It seems many of us are creatures of habit, and once we've found a routine that works for us, we like to convince ourselves (and sometimes everyone around us) that our shower habits are the best. Luckily, there are a few scientific reasons why there isn't just one perfect time for everyone to hit the bathroom.

That's right, according to science, all of you night shower fanatics knew what you were talking about all along. Then again, so did the morning shower crew. And so did the rest of us fickle folks who sway between day and night bathing because we can never make up our minds as to which is really best. Because as it turns out, it's worthwhile to take a shower at either time, depending on what your end goals are (you know, above and beyond the whole just getting clean thing). Below are some scientifically-backed motivating factors as to why you might want to shower at a certain time.

1. In The Morning: If You Shave In The Shower, And Are A Tad Clumsy

I don't know about you, but I can't seem to go more than a month without nicking one of my ankles when I shave. You'd think after time that the amount of scar tissue back there might prevent future damage, but my clumsy razor skills keep proving that theory wrong shower upon shower.

If you're anything like me in that regard, there's good news: Showering in the morning may just make those little nicks less likely to look like shark week. As the National Center for Biotechnology Information tells us, there is an increase in blood clotting platelets from 6 AM to 9 AM, but only if you're up and moving around during that time. Thus, morning showers go a long way toward making shaving mishaps less disastrous.

2. In The Morning: If You Know You'll Have To Creatively Problem-Solve

Looking to impress your boss with a list of creative pitches, or a new workaround to a problem that's been plaguing the office? Perhaps your novel is at a standstill, or the chord progression you've been tinkering with keeps falling short of the perfect ambiance necessary to score the commercial you've been working on. Starting your day off with a shower in the morning might just help you reach a solution.

Showering, at any time of day, is linked to something called an incubation period, during which unconscious processes aid creative thinking. Taking a shower in the morning, however, according to Shelly Carson, Ph.D., is the key to performing your best during creatively demanding work weeks.

3. At Night: If You Have Difficulty Falling Asleep

If falling asleep is difficult, showering in the evening, shortly before bed, may help you catch some shut eye more quickly and effectively. According to the National Center for Biotechnology Information, the bodily temperature drop that results after taking a warm shower mimics the body's natural thermal regulation in regard to sleep, as sleep is most conductive in the temperature minimum phase of your body's circadian rhythm. Cooling off from a warm shower naturally makes you drowsy, and may have some clinical relevance for people who struggle with insomnia.

Just be aware of temperature here, because overheating your body with a hot shower can have the undesired effect of keeping you awake for a prolonged period of time. Health and lifestyle website Greatist suggests taking a five to 15 minute shower at a temperature near 104 degrees Fahrenheit, and gradually lowering the temperature of the water as you reach the end of the shower.

4. At Night: If You're Prone To Oily Skin

According to Bethanee Schlosser, M.D., Ph.D, assistant professor of dermatology and director of the Women's Skin Health Program for Northwestern Medicine, your face's oil production peaks at around 1 PM, so taking a shower at night can really aid in preventing breakouts. Washing your skin off at the end of the day removes said oil, as well as the pollutants and residue that can accumulate from a day of work, play, and exertion.

5. Every Two To Three Days: If You Have Sensitive Skin

If you ask me, taking a good, hot shower is one of the most relaxing activities you can do in an average day. However, if each and every one of the showers you take is steaming, you could be doing damage to your body's natural defenses. Dr. Joshua Zeichner, assistant professor of dermatology at Mount Sinai Hospital in New York City, and dermatologist Dr. Ranella Hirsch, told BuzzFeed Life that showering too regularly in hot water can irritate skin, decrease beneficial bacteria, and increase your risk of infection.

So, what's the key takeaway here in terms of when to shower? It's best to aim for twice every three days, or for some people, once every other day. And if you can manage, try to tone down some of that scalding effect.

As you can see, even the scientific answer to when you should shower is a bit convoluted. The truth is, personal grooming is still a personal choice. You have to find the routine that works best for your schedule (and maybe the schedule of your roommate or SO), your body's natural rhythms, and the amount of dirt and grime you accumulate in a given day.

More like this
42 Black Owned Fashion & Beauty Brands To Support Today & Always
By Mekita Rivas, Shea Simmons, Kui Mwai and Dominique Norman
13 Non-Toxic Sunscreens Under £35, So You Can Glow Responsibly
By Lauren Sharkey, Rebecca Fearn and Jessica Morgan
7 Derm-Approved Tricks That'll Help Ease Sunburn Pain
By Paris Giles
Brooke Shields Has An Equally Relaxing Alternative To Meditation
By Erin Stovall
Get Even More From Bustle — Sign Up For The Newsletter