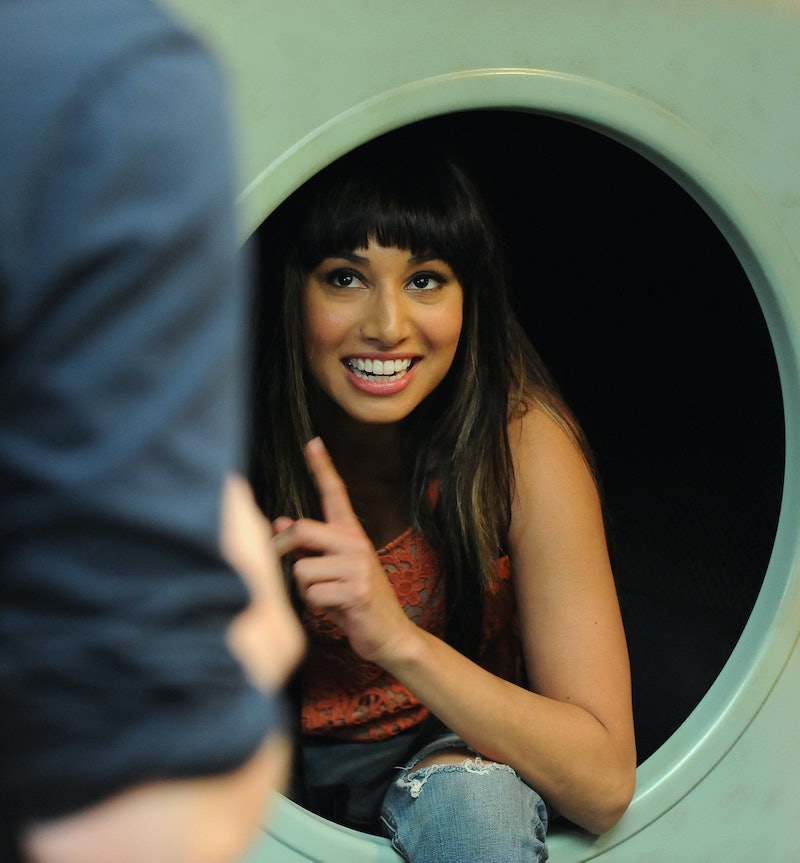 On the new Fox TV series Cooper Barrett's Guide to Surviving Life, title character Cooper doesn't have his post-college life figured out just yet — especially when it comes to romance. Cooper (Jack Cutmore-Scott) is attracted to Kelly Bishop (Meaghan Rath) from the first moments he moves into the apartment next to her in 2011, and they wind up finally smooching in a flash-forward to 2015. In subsequent episodes of the comedy, I think Cooper and Kelly should date on Cooper Barrett's Guide to Surviving Life and give in to their mutual attraction. It's clear these two characters are perfect for each other in the pilot episode, which premiered on Sunday night.

But like all things in life, it's complicated. The series pilot shows us that over the years, the two neighbors have bantered, bonded, and Cooper has once spotted Kelly hiding from her boyfriend inside a dryer in the laundry room. In the 2015 flash-forward, Cooper and Kelly have a blast at a Los Angeles Clippers basketball game after she breaks up with her latest boyfriend — until the duo is displayed on that dastardly "Kiss Cam." Cooper and Kelly try to wave off the jumbotron folks to move onto someone else, but they kiss as the crowd eggs them on. As you might have guessed, they get totally into the kiss, but Cooper ruins the moment by dashing off out of the arena with the words: "I gotta take a leak." Dude, really?

Cooper narrates the moment with regret, especially because he gets kidnapped and taken hostage by some UFC guys in the bathroom regarding some stolen TV shenanigans. While that storyline gets wrapped up, the episode ends with Kelly slamming a door in Cooper's face when he attempts to talk to her. Yikes. Sure, Cooper did not handle the kiss in the best way and she's not handling it well either, but I'm hoping these two give romance a chance in future episodes. It's evident from the pilot that Cooper and Kelly have a rare connection that you don't find with someone every day. It would be a shame to see them not explore it and waste time being mad at each other. Your twenties — and TV seasons — only last so long.