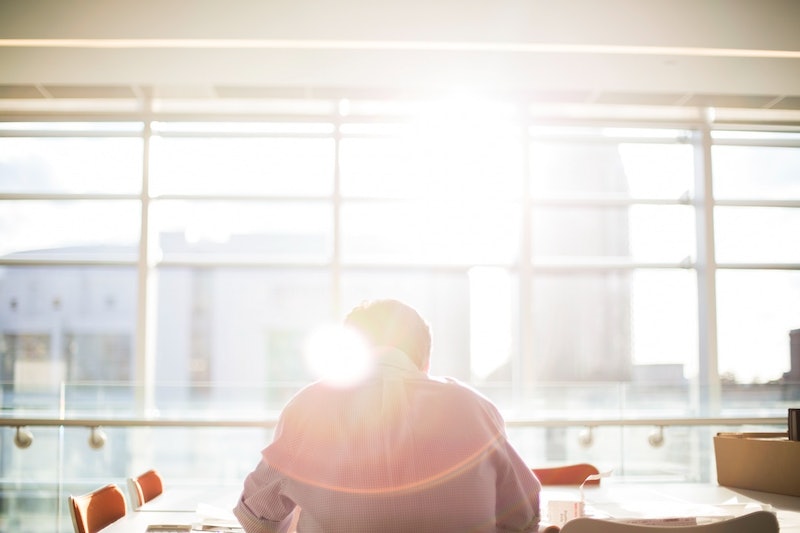 It's a new year and a new you — but can your campaign of self-improvement include changing your introversion to extroversion, or vice versa? Tips and tricks on shifting your personality traits abound on the Internet, but the real story about introverts and whether it's possible to shift your exhaustion-after-five-minutes-at-a-party into raging-all-night-energy is more complex than it seems. You're not exactly condemned to stay within your personality traits, but it's also harder to outrun them than you might think.

The division of introverts into "shy" and extroverts into "arrogant" is more simplistic than the reality. The personality division is actually about focus; introverts gain more stimulation from inward-focused activities, like thinking and quiet reading, while extroverts get it from their outer environment. Extroverts get energy from other people, while introverts lose it rapidly in social settings. (I am a classic introvert; during parties I tend to wander off into other rooms on my own, recharge, and come back when I've regained my energy.)

If you want, for whatever reason, to indulge your feeling that the grass is greener and dip into a "new" side of your personality, it's going to be harder than forcing yourself into more social situations or trying to spend more time at home with a book. Here's the skinny on whether introversion and extroversion can really be changed.

Introverts And Extroverts Have Different Brains

If you're looking to shift yourself from intro- to extro-, or the other way around, you may have more trouble than you were anticipating. It seems that, according to neuroscience, introversion and extroversion act very differently in the brain, responding differently to rewards and stimuli in the outside world. If you want to get yourself out of your particular orientation, it'll take more than willpower.

Two landmark studies outlined by Medical Daily have shaped the way we think about introversion and extroversion in our brains. One, which took place back in 2005, highlighted how extroverts respond differently to rewards by giving people a gambling challenge. Extroverts' brains went haywire when a gamble won, activating the "reward" system far more than introverts'. The second, from 2012, found that there's actually a substantial structural difference in the adult brains of introverts and extroverts: introverts have a higher percentage of grey matter, the part of the brain that conducts messages and allows for abstract thought.

The studies go on, though. Discovery Magazine outlines a heap of them, from a study in 2013 that found extroverts tend to get happiness from their outer environment and introverts from their inner thoughts, to the discovery that the right hemisphere amygdala tends to be larger in extroverts than introverts. It all adds up to one conclusion: by the time you're an adult, your pattern of extroversion or introversion may be patterned physically into your brain, and that will make it seriously hard to shift.

We Can Act Out Of Character — For A Little While

Our brains may be geared towards one particular kind of rewarding, but that doesn't mean it's all set in stone. Susan Cain is an expert on introverts; her book Quiet , about how introversion is actually a serious benefit across culture and industry, was a massive smash. And she talks about something very interesting in it: the possibility of acting "out of character" for the sake of somebody else.

It's called "free trait theory," and was originated by Professor Brian Little. As Cain puts it in Quiet, free trait theory is our capacity to escape from our own innate personality traits, like introversion, if only temporarily. "We can and do act out of character," she says, "in the service of core personal projects. In other words, introverts are capable of acting like extroverts for the sake of work they consider important, people they love, or anything they value highly. Free Trait Theory explains why an introvert might throw his extroverted wife a surprise party or join the PTA at his daughter’s school."

The interesting thing about this is that it explains why extroverts and introverts are sometimes able to "change" themselves, but still allows for them to remain, at their essence, the same. If it's really important to us, Cain and Little say, we'll push out of our shell or back into it — but only for a short time. If we act out of character for too long, we risk serious burnout. (Little himself, a college lecturer and introvert who tried to push himself to be extroverted for his students, ended up with double pneumonia.)

You're Unlikely To Be Fully One Or The Other

Carl Jung was of the opinion that "There is no such thing as a pure introvert or extrovert. Such a person would be in the lunatic asylum." And it looks as if he's correct; it's commonly accepted now that, while there is a divide in our brain mechanics, even the most devoted introvert may have a bit of extroversion at their disposal.

Some psychologists, for example, believe that introverts have their own particular breed of expert social skills and charisma because of their advantages: introverts are good listeners and excellent observers of social cues. And then there's the phenomenon of the ambivert: the person with elements of both categories, and the capability to switch between them and adapt to social situations as needed. The Wall Street Journal calls it the equivalent of being bilingual, and it doesn't involve any kind of chameleon activity or faking. There's a test for it if you suspect your place on the spectrum of introversion and extroversion is more heavily inclined towards the middle.

Let's be frank: if you're a solid introvert or extrovert, it's likely to stay like that for life. Brains are hard to rewire. But there are learned behaviors that can help you "fake it," or temporarily escape your own nature, in order to feel more adaptable in social situations. You're never going to be able to shift your neural reward centers or reshape your brain matter, but you can try a little alteration now and then.

The best way in which to move into comfortable periods of temporary escape is to challenge yourself bit by bit. Don't go all-out and expect to be the rager at the party or the deep thinker in the corner first try; do it for the sake of something that really motivates you, like a job promotion or a friend's social life, and set limits, half an hour or ten minutes at a time. A little change may be all you really need to feel as if you've pushed the boundaries of your personality.