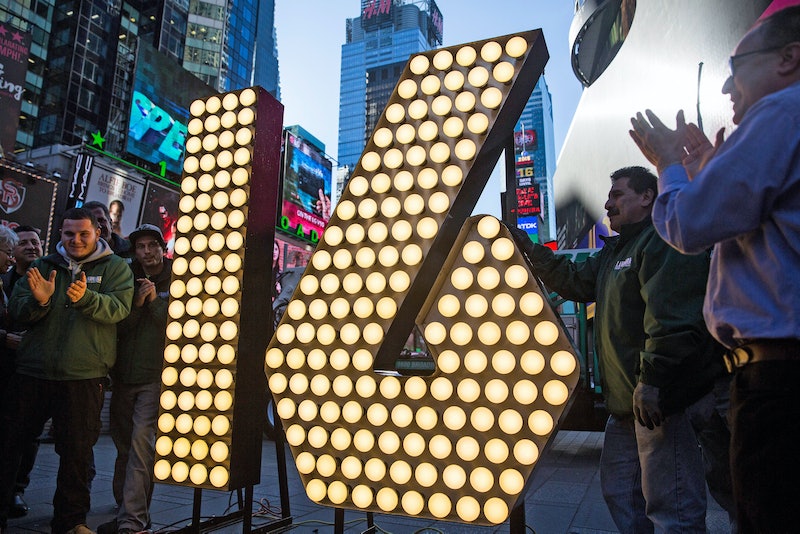 A new year represents a new start, and is the perfect time to commit yourself to making a few changes. Whether you want to spend more time on your hobby, save money, volunteer more often, or just be kinder to others, New Year's resolutions can be very helpful in thinking about what you want to do differently in 2016 to help you grow as a person. If you don't have any in mind yet, there are some feminist New Year's resolutions that everyone could benefit from taking on.

Every person has room to improve, and even die-hard feminists sometimes find themselves doing or thinking something that doesn't totally fit with their ideals. Some habits have become so normal that it's difficult to even realize when you're doing them. So, committing to one or a few resolutions that will help promote equality and empower yourself and others would be a productive way to spend 2016. Making a feminist resolution doesn't necessarily mean quitting your day job to volunteer at a women's shelter or ceasing to shave (although if you feel so inclined, go right ahead) — there are small changes everyone can make to their daily behavior.

Here are five feminist New Year's resolutions you can make to personally promote girl power in the new year.

Many women apologize profusely — for things other people did, for asking for what they want, and for standing up for themselves. One theory about why over-apologizing is more common for women than men is that women have a lower threshold for what's offensive, and don't want to appear rude, according to a 2010 study in Psychological Science. However, it could also have to do with the fact that society conditions women and girls to remain small, quiet, and unobtrusive.

Make a mental note of every time you say "sorry" throughout the day, and each time ask yourself: Did I really need to apologize for that?

I often find myself apologizing when someone else bumps into me, and then realize that it wasn't my fault at all, and they should really be the one to apologize. If you want to kick this habit, make a resolution to stop saying "sorry" when it's unnecessary.

Compliment Women On Their Personality

Instead of complimenting your female friends, family members, and acquaintances on their looks, make a conscious decision to admire aspects of their personality or intelligence. Women and girls are often judged by their physical appearance and are pressured to always look perfect, so it's important to recognize other aspects of each other. There's absolutely nothing wrong with enjoying fashion or make-up, but no one's worth should be measured by their appearance. The women in your life will probably really enjoy you pointing out what you like best about them besides their outfit choice.

If you want the nation's lawmakers to hold your same feminist beliefs, you should vote in the 2016 elections. Whether you're political or not, voting for feminists is a simple way to promote gender equality and keep misogynists out of office. Making a commitment to yourself to vote this year will make you less likely to succumb to laziness Nov. 8 or any other day your city has local elections. You can even complete the first step and register right now.

There are countless programs and non-profits nationwide dedicated to empowering young women and teaching them how to be confident leaders. The American Association of University Women, for example, has programs to help female college students succeed and be more confident. Volunteering or donating to an organization empowering girls will help shape the next generation of feminists and allow you to proactively fight for gender equality.

Call People Out On Sexism

Women face blatant and slight sexist comments and discrimination every day. Why not make a resolution to call people out when they do something that offends you? It doesn't have to be aggressive or rude, but you can simply explain to them why what they did or said isn't OK. Some people don't even realize that their actions are misogynistic, so letting them know could keep them from continuing to do the same things. If not, at least you'll be standing up for yourself and other women.

Here's to hoping 2016 is the most female-friendly year yet.