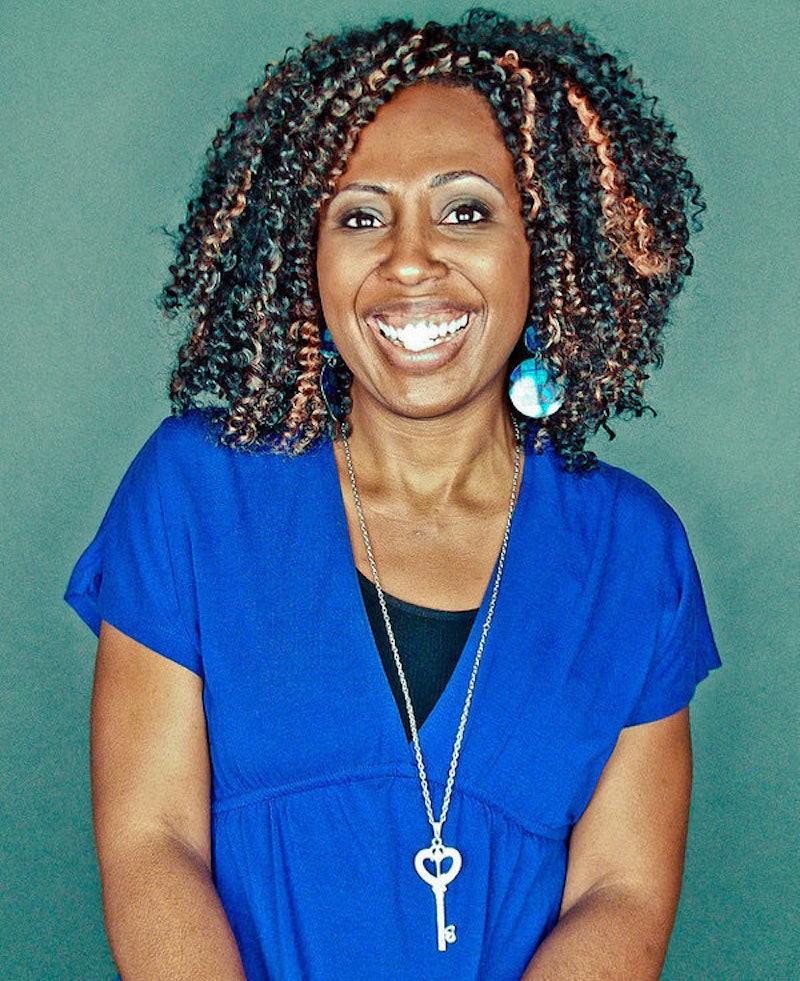 As much as attitudes toward domestic violence survivors have progressed in recent decades, the "battered woman" stereotype still persists — but not for long, if Chantal Barlow's Unconventional Apology Project has its way. Created in memory of her deceased grandmother, who was murdered by Barlow's grandfather in 1975, the project challenges stereotypes surrounding survivors of domestic violence with an ironic, behind-the-scenes twist directed at the grandfather who faced not a single repercussion for drunkenly murdering his wife 40 years ago. Although Barlow's grandfather shot and killed his wife in broad daylight, his connections and a culture of silence ensured that he never faced any consequences for the murder, while his family scrambled to cope with the secret.

"Once my grandfather passed away two years ago, I wanted to take a firm stance on celebrating women that have similar stories to my grandmother," Barlow wrote to Bustle over email. "So I am using his camera to take the portraits of survivors of domestic violence and of the family members of those who did not survive."

Where many domestic violence portraits take a somber, ultra-sensitive approach, Barlow's vision focuses on a rarely-discussed aspect of life after abuse: When survival turns into simply living. As a result, the portraits feature their subjects laughing, smiling, and enjoying themselves — a far cry from the hollow-eyed waifs of the "battered woman" stereotype.

"I tend to believe that there are two approaches to life; the upstream and downstream path. I enjoy going with the flow, but creatively speaking, I don't think it's always the best approach," Barlow explained. "I want to be able to look back at everything I've attached myself to and feel as though I've taken care of all of those precious moments, including the people in them. I know I would not be able to look back at these portraits if I felt as though this was all a re-victimization of survivors."

"I also wanted the participants to come away with feeling like they gained something since they participated. They can look back and feel good about that time and place in their lives, and have a different kind of reminder of the obstacles they have overcome," she added.

Each portrait is accompanied by an interview with the subject, discussing their choice to participate in the project. Although the narratives differ in the details, a sense of relief at being able to tell their story winds its way through each interview.

"It's amazing to sit in this chair, in front of the lights and camera and be proud that I am strong enough to share my story," Barlow, a survivor of abuse herself, said in her own portrait.

Similarly, a sense of responsibility to other domestic violence survivors — past, present, and future — was a common theme as well. "I believe that the power of story is important in order to achieve justice," said one survivor.

It should be noted that the project doesn't include any men, who are often left out of the conversation surrounding domestic violence, and Barlow explained that this was intentional. "The project's main focus is honoring my grandmother. This first series is meant to highlight the experiences of the demographic she was a part of -- women... Also, one in three women in America have experienced some form of domestic violence so I really wanted to show what [that] looks like," she wrote over email. "I have always had plans to highlight other communities (men, child survivors for example) after this first series of 36 portraits has been completed."

The women included in the project come from a variety of backgrounds, from ethnicity to age to sexual orientation. As diverse as the survivors are, though, they all have one thing in common: They haven't allowed their abuse to define their lives.

"I hope that the Project continues to inspire, heal, and disrupt the current social climate around domestic and intimate partner violence," Barlow said. Check out a few more portraits below, and head over to the Unconventional Apology Project to see the entire series.