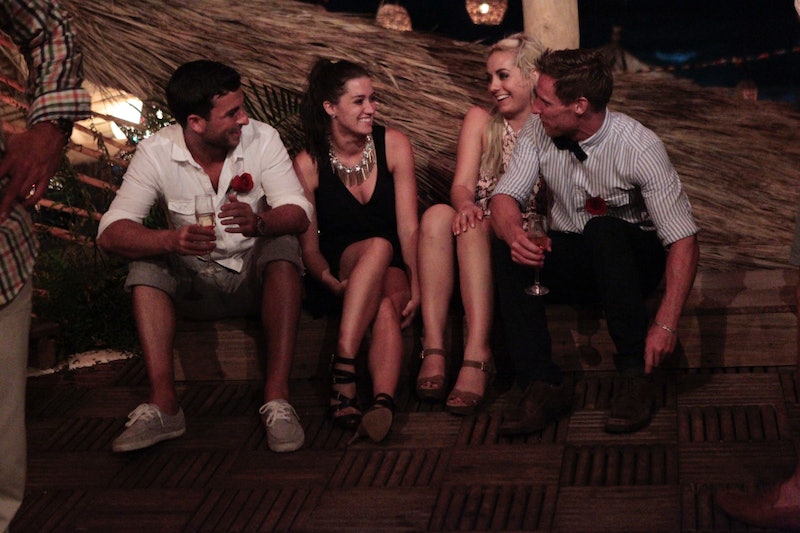 There's a slim chance at finding true, lasting love when it comes to being a contestant on The Bachelor, but one thing you may actually find is a best friend. Over the years, social media has shown us that Bachelor contestants over the various seasons have continued to keep in touch and remain friends, even if they didn't get proposed to on reality TV. As we're now in the 20th season of The Bachelor, let's take a look back at the unexpected Bachelor friendships that have come out of the show — and to be honest there are a ton of them, but I’m going to focus on the ones that we can probably go ahead and label as BFFs. Between the three Bachelor shows over the year, contestants have a higher chance of making friends than they do falling in love, but that’s kind of awesome too, right? Who wouldn’t love to meet their best friend while competing to fall in love with the same person?

There were 28 women trying to become Ben Higgins’ wife this season and, besides the twins, who are already attached at the hip, I'm going to bet that viewers will start seeing some everlasting friendships pop up in social media photos as the season progresses. Maybe after this Becca and Amber will be the new Carly and Jade (probably not, but they could try). Here are some of the best Bachelor BFFs to date.

Let's face it, Jade and Carly have pretty much the best friendship in the history of the Bachelor franchise. Before Jade moved to Kansas City with Tanner, she up and moved to Nashville so she could be close to her best friend. These two have given us all #friendshipgoals over the past year.

When Andi made her big move from Georgia to New York City, Sharleen was there to welcome her to her new home. The two met on Juan Pablo’s season and probably bonded over the fact that he’s the worst. Their Instagrams don’t hide the fact that they are pretty much in BFF love, and it’s adorable.

They might not have found love in Paradise, but Tenley and JJ formed quite the friendship while in Mexico. She frequently travels to Denver and spends time with him and his daughter. Most recently they went ice skating together, but in the past have attended Broncos games and documented their runs together on social media.

These two ladies are so close that Desiree was a witness at Renée’s wedding. Originally, Desiree was a contestant on Sean Lowe’s season of The Bachelor and went on to become the Bachelorette where she sent Juan Pablo packing. Renée happened to be a contestant on Juan Pablo’s season. See, everyone is connected in the Bachelor world and these two now have double dates with their husbands.

Some bromances are unbreakable. Robert Graham, Graham Bunn and Zack Kalter have been besties for a long time now. Zack and Robert were both originally on Desiree’s season of The Bachelorette, while Graham was long before their time, trying to win over DeAnna Pappas’ heart. Graham then ended up on the second season of Bachelor Pad and then all three of them hung out on the first season of Bachelor in Paradise. Since they all live in LA it’s not hard for them to keep the bromance going.

Don’t forget about Kaitlyn’s men. Jared Haibon and Ben Zorn (the other Ben) are still hanging out. Maybe Ben is helping Jared work on those muscles. Either way, these two have an adorable bromance.

You may not remember Nikki Delventhal, but you definitely didn’t forget Ashley Salter. Our favorite pomegranate-loving former contestant is getting married and her pal Nikki was there to celebrate her engagement with her. The two were both on Chris Soules’ season of The Bachelor.

Just like Carly, Zak may not have been picked for lasting love, but he too ended up with a lifelong best friend. Zak and Juan Pablo were both contestants competing for Desiree and both got kicked to the curb, but their friendship has remained over the years. There’s even a photo of Carly with him calling Juan Pablo part of their family. It’s a very small world, The Bachelor world.

Despite all the shady stuff Samantha pulled in Paradise this year, she still managed to walk away with friends on the show. "Unexpected friendships are the best ones,” Amber wrote on Instagram alongside a pic of her and Samantha. “This year has been crazy and 2016 I'm sure will be even better. I can't imagine not having @samanthasteffen in my life along with many other girls I have met from The Bachelor.”

These gals met while trying to win the heart of Juan Pablo. We all know how that turned out (they lost). But, they gained each other's friendship, so perhaps it was worth it. The pair went to Taylor Swift's concert together and Kelly called Christy her "Abigail," which in Taylor Swift's world is the closest thing you can get to a sister without actually being related.

These ladies live across the country from one another, but they still fly back and forth to see each other. Both Megan and Britt were on Chris Soules' season. "You are a beautiful treasure & a friend forever!" Britt wrote on Instagram after she visited Megan in Nashville, "What a fun and life-giving night of music, laughter, tears, and prayer with my sweet sister! My heart is so full."

So, even if a contestant doesn't find #RelationshipGoals on The Bachelor, at least they might pick up a #squad.