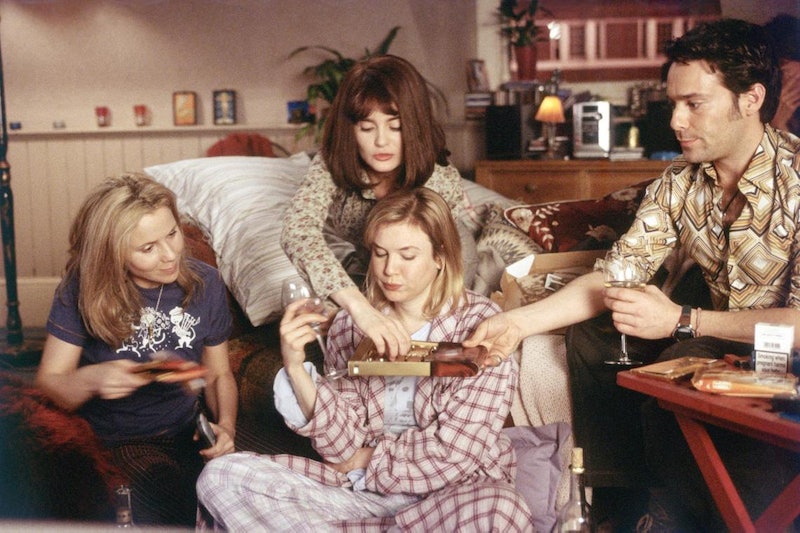 Was New Year's Eve invented to sell gym memberships, waxing sessions, and kale? No, but I swear it feels like it sometimes. No movie has skewered the horrific cycle of self-improvement and failure that New Year's resolutions represent like Bridget Jones's Diary . While movies like When Harry Met Sally and (obviously) New Year's Eve show the holiday to be some kind of magical evening of do-overs and new beginnings, Bridget tells the truth. It's just a day. Beginnings and endings can happen anytime. And it's not fair to put deadlines on your own personal growth. The Bridget Jones' Diary New Year's Eve scene is a classic because it speaks to anyone who disappointed themselves this year. And it tells them to lay off.

Bridget Jones' Diary opens on New Year's Day. British singleton Bridget spends the first half with her parents and their friends at her mother's annual Turkey Curry Buffet, wearing a hideous festive vest and embarrassing herself in front of wealthy barrister Mark Darcy. (Who's wearing something equally stupid.) The second half, she spends with pajamas, Frasier reruns, and the easy listening weeper "All By Myself." By the next morning, she's christened the titular diary and committed to her resolutions: first, to lose 20 pounds; second, to always put last night's panties in the laundry basket; and third, to find a "nice, sensible boyfriend to go out with." Bridget's theory is that if she can clean up her life in a few areas, she'll be magically happy and confident. It's a resolution trap that so many fall into, because it doesn't take into account the snags that can't be planned for (like Bridget's mother taking up with a overly tanned TV salesman) and the problems that will still be there even if all the boxes get checked.

By the next New Year's, Bridget has dealt with upheaval in every part of her life. Her parents separate for a while and then get back together; she dates and dumps her roguish boss and fantasy object, Daniel Cleaver; and she quits the publishing job where aforementioned boss is more interested in the length of her skirt than any of her work and finds a new one in TV that's ridiculous but somehow rewarding. She also has quite a few more run-ins with Mark Darcy, through which they both come to realize that their first impressions of each other may have been slightly correct (her: drunk, him: stuffy) but certainly didn't tell the whole story.

Bridget hasn't curbed her drinking or her smoking. She hasn't hit her goal weight. And she made as many embarrassing mistakes as she probably did the year before. But she doesn't need to have done any of those things to have kicked a bad relationship to the curb, made a major career move, or have been a supportive daughter and friend. When Mark tells Bridget that he's fond of her, he refuses to include the qualifier that she expects. Instead, "Just as you are," is exactly what Bridget, self-improvement addict, needs to hear.

Bridget and Mark finally get together one year after the film begins just as her friends are about to whisk her off to Paris. While Bridget is changing into the "genuinely tiny knickers" she's been saving for just such an occasion, Mark stumbles upon her diary and reads a few choice selections. It's the chronicle of her year in missteps and victories, including all her misplaced anger towards the man she judged too quickly. ("No wonder his clever wife left him.") Mark leaves the flat without telling her where he's going, and Bridget chases him down a snowy London street in just a sweater and panties, knowing what he must have read.

I didn't mean it. I mean, I meant it. But I was so stupid, I didn't mean what I meant. For Christ's sakes, it's only a diary. Everyone knows diaries are just full of crap.

Diaries are "full of crap" because they're never really done. Every feeling that Bridget had and wrote down was valid at the time, and one of the reasons Mark is such a wonderful romantic hero is that he knows that she's entitled to them. She lets herself change in the ways that really matter, and that kind of development can't be quantified.

The New Year's Eve scene in Bridget Jones' Diary is sweet and romantic, but I love it because reminds me not to judge myself too harshly and that everyone deserves the room to be wrong once in a while.