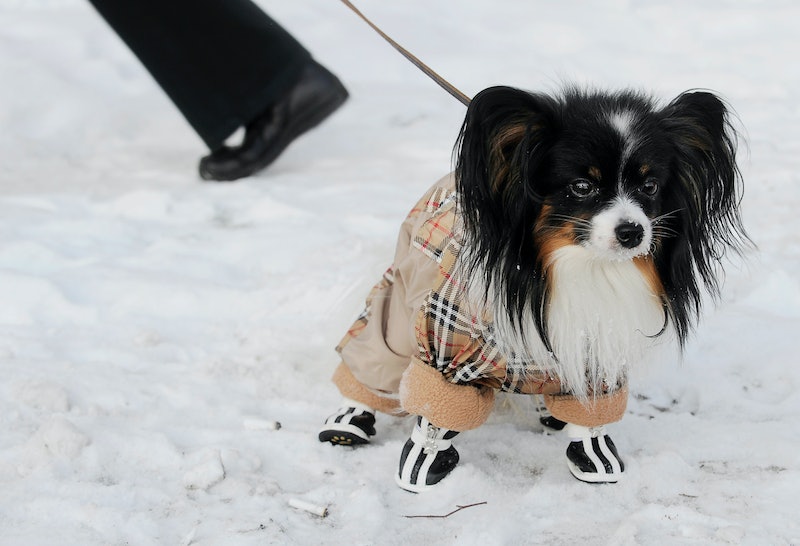 The Internet debates a lot of stupid things, but the latest is pretty silly: how dogs would wear pants if dogs wore pants. And you thought the "What color is the dress?" argument was ridiculous. The latest debacle to hit the Internet has people discussing whether, if dogs wore pants, the pants would be worn on their hind legs only or if the pants would fit across the whole bottom half of the dog, with all four legs in the pants. Are you heavily eye-rolling yet?

The debate started when Maxim editor Jared Keller Tweeted out the question to his followers on Monday night. So now you know who to blame for this madness. The accompanying photo included a cartoon of two dogs, each one wearing pants in the two respective ways described above (on two legs or on all four). The question has apparently really awoken something in the people of the Internet, because people can't stop trying to answer it, as though it was some kind of deep and profound philosophical question (which maybe it is, IDK). Maybe by figuring out how dogs would wear pants if dogs wore pants we will begin the process to creating a better world.

People have had a lot of opinions, obviously, but overwhelmingly people have said that dogs would wear their pants on just their hind legs. Keller even polled his followers, with over 25,000 responding, and 81 percent of them saying the dog would wear the damn pants on its hind legs.

Here are the main arguments for each, so you can decide for yourself what side of this completely irrelevant (because dogs don't actually wear pants) argument you stand on:

1. Just On Its Hind Legs

This is how humans wear pants, ergo, this is how dogs should wear pants. As pants are a human invention then this is how they were intended to be worn. In my professional and scientific opinion, I also deem this way much cuter than the other way. Also, how dumb and adorable are dogs walking on their hind legs? Most dogs think they're people anyway, so why not let them dress like us too? This also means we wouldn't have to manufacture special dog pants (should dogs suddenly start wearing pants) and we could simply use pants we already have. Here are some wise opinions from the Internet:

Because the dog has four legs, not two legs and two arms, the dog should wear pants that cover all four legs. This is obviously stupid because then you wouldn't be able to do the aforementioned cute thing of the dog standing on its hind legs like people. But given that the dog is on all fours most of the time, this makes the most sense. Or we could just teach dogs to walk on their hind legs and be done with this debate forever. Here are some opinions from the peanut gallery:

My favorite opinion is from this guy, who I think has ended the debate once and for all: