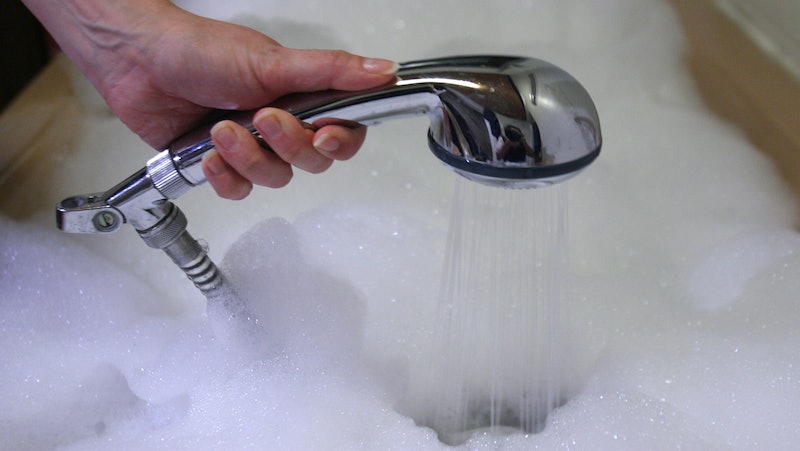 While showering is clearly a practice that I endorse, use of certain soaps and frequency of the practice may be a little iffy. There are actually several good and legitimate reasons to not shower every day of your life, and soap is a reason. So is soap bad for your skin, or is that one big myth? The truth is a little tricky because the answer is yes and a no.

Showering daily has been shown to eliminate useful bacteria, dry out your skin and hair, and on a basic level, waste water. However, most of the reasons not to shower daily come directly from our use of soap, not from the shower itself. According to Today , soap should only be used where it's absolutely needed in order to prevent the elimination of useful bacteria. Plus, sudsing up your whole body can cause excess dryness, and according to Dr. Casey Carlos with spoke with Today, the skin is somewhat self-cleaning.

The Independent took things a step further in their aversion to soap. The paper spoke with Digestive Center for Women founder Robynne Chutkan about the daily use of soap and she explained that even after your sweatiest days, soaping up your body in the shower isn't necessary. She says, "Dirt doesn’t cause disease — but repeatedly killing off the good bacteria on our skin may actually harm our immunity.”

Not all soaps are created equal though. While many estheticians urge men and women to stop using bar soap on their faces, no one is suggesting that soap is the devil. Instead of calling it quits on the suds, looking at the ingredients in your body wash is a better idea. One of the biggest culprits of creating lack-luster washes are soaps that contain "fragrance." According to HealthyWomen.org , fragrance can essentially, "be a cocktail of chemicals and you’d never know it." The site explains that the FDA doesn't require companies to disclose the ingredients in their fragrances, so it's highly unlikely you'll know what your putting on your skin.

HealthyWomen.org also suggests the avoidance of other harmful chemicals often found in soaps such as parabens, sulfates, and triclosan. According to the site, parabens are able to enter the bloodstream mimicking estrogen once on the skin while sulfates — which are used to create a lather — strip the skin of natural oils. Triclosan is one of the biggest issues though. This chemical "promotes the emergence and growth of bacteria resistant to antibiotic cleansers."

So, the answer to the is soap bad for your skin question is a bit complicated. It's really a mixed bag. Showering less often, being cautious about the types of soap you're using, and avoiding overuse of anti-bacterial soaps will all help to alleviate the negative effects that soap can have on the skin.

More like this
Is It Actually Bad To Cut Your Cuticles?
By Stephanie Chon and Paris Giles
How Skin Care Experts Are Stepping Up To Support Transgender Patients
By Audrey Noble
Most Comfortable Underwear For Big Butts
By Audrey Williams
Benzoyl Peroxide For Acne Is Your Ticket To Clear Skin
By Paris Giles
Get Even More From Bustle — Sign Up For The Newsletter