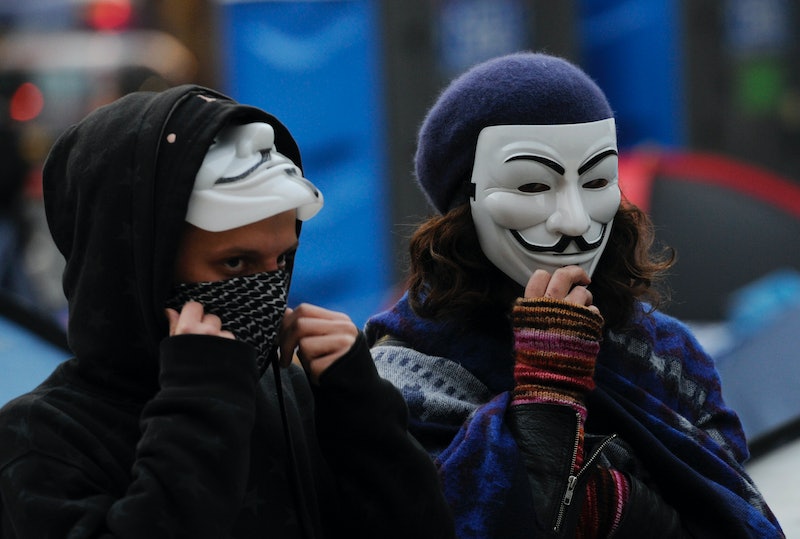 Hacktivist group Anonymous has reportedly found a new beneficiary for its efforts — in this case, they hope to help exonerate Steven Avery, a man convicted of a 2005 murder and the subject of Netflix's new docuseries Making A Murderer. Suspected members of Anonymous claim that Avery's case was full of corruption on the part of the Manitowoc County Sheriff's Department, and that the information they've gathered will finally shed light on that alleged injustice. If Anonymous' information helps Steven Avery in the way they believe it could, a supposedly innocent man could once again walk free.

Avery may have become of interest to the hactivist group for his previous unjust experience with the law. In 2003, Avery was exonerated from a wrongful sexual assault conviction for which he had been serving a 32-year prison sentence. He served 18 years of his sentence before DNA evidence cleared him of the charge, according to the Innocence Project. Two years later, however, Avery was charged with the murder of 25-year-old photographer Teresa Halbach and eventually sentenced to a life sentence without the possibility of parole. He was likewise denied an appeal for a new trial in 2011.

People claiming to belong to Anonymous are hoping to change that with phone records and an evidence list that it has allegedly gathered. According to Business Insider, there are two main targets, Manitowoc County Sheriff's Office's Sgt. Andrew Colborn and Lt. James Lenk, which the docuseries claimed may have sought to put Avery in prison, regardless of whether or not he was guilty.

Colborn and fellow officer Lt. James Lenk were suspected of discovering evidence which suggested Avery's innocence in the Beerntsen case in the 1990s. According to the documentary, a person identifying themselves as a detective called the Manitowoc County Sheriff's Department to inform them that they had a suspect in custody named Gregory Allen, who claimed to have committed a sexual assault in Manitowoc County and that "someone else was in jail for it." According to the documentary, Sergeant Andrew Colborn, who took the call, allegedly informed his superior officer, Lieutenant James Lenk. No report was filed at this time. The Minnesota-based Gazette Review reports:

This phone call remained officially unreported until September 12, 2003. The day after Avery is released for his unjust conviction, Andrew Colborn contacted his superior officer, James Lenk. Lenk told Colborn to write a report, which was then taken by the sheriff and placed in a safe.

This report is uncovered only during the litigation of Avery’s civil suit against Manitowoc County, more than two years later. On October 11, James Lenk is deposed, followed two days later by Andrew Colborn, with questions about the report. While Lenk’s answers are largely evasive and unclear, it is established he instructed Colborn to make a report in 2003. What isn’t established is whether at any point earlier Lenk knew of the call.

After being released from prison, Avery filed a $36 million civil lawsuit against Manitowoc County and Lenk and Colborn were deposed in the suit, as seen in the docuseries.

The sheriff's department employees were also instrumental in the Halbach murder investigation, reports The Post Crescent, Appleton, Wisconsin's local newspaper. They were deposed in Avery's suit just weeks before Halbach's murder. After Halbach was murdered, both Colborn and Lenk took on the case and focused their efforts almost exclusively on Avery, while his suit was simultaneously ongoing. The pair allegedly may have planted certain evidence that led to Avery's conviction, the defense team in the docuseries claimed.

After taunting the officers and sheriff's department on Twitter, Anonymous is believed to have threatened to leak information if they did not release it themselves. The evidence list, emails, and telephone records would reportedly account for the officers' activity during the Halbach investigation and trial. This activity, they say, proves Colborn and Lenk's misconduct in handling the case, and that Avery was set up.

If the documents hold true, Avery may be looking at a chance to make another appeal and could ultimately be a free man again.