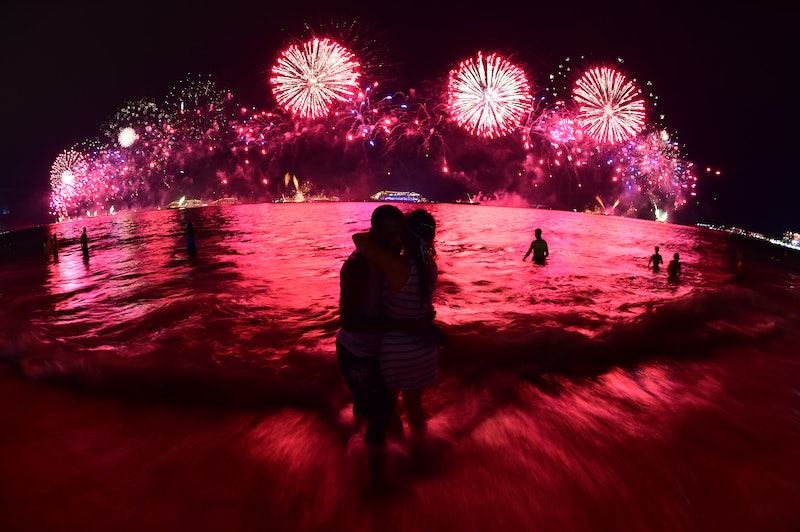 As the clock hits midnight tonight, many of us will lean in for the all-important New Year's Eve kiss — maybe with a significant other, perhaps with a mysterious stranger, but whomever you're locking lips with, you will hardly be blazing new paths, at least from a historical perspective. Why do we kiss at midnight on New Year's Eve anyway? The tradition might actually be older than you think.

Let's rewind back to the 8th century BC, when the ever-frisky Ancient Romans held the Festival of Saturnalia in mid-December. Saturn was an agricultural god, so naturally his festival got pretty serious with the widespread upending of social norms — lavish feasts for slaves, extra freedoms for women, illicit gambling openly permitted, etc. Roman philosopher Seneca The Younger described the festivities in a letter to a friend. He wrote, "Loose reins are given to public dissipation," which is Ancient Roman for, "Dude, come over, there are naked people on my lawn." But, long story short, scholars believe a midnight kiss and more (ooh la la!) were a part of the Saturnalia celebrations.

Fast-forward to the Renaissance when masquerade balls were all the rage in Europe. The masks symbolized the evil spirits and vice of the previous year. At midnight, the masks were removed and kisses were the purifying force that would banish the aforementioned evil and kick off the new year with a clean slate. English and German folklore doubled down on this tradition by suggesting that a midnight kiss could strengthen a budding romance, and that not kissing someone at midnight on New Year's would result in a lonely and loveless year to come.

So, to recap, here are the five reasons why we kiss at midnight on New Year's.

1. The Romans Made Us Do It

The Romans have had a lasting impact on our modern romantic traditions. The evidence is right there in the word "romantic." The Festival of Saturnalia lives on in our New Year's celebrations today!

2. To Scare Off The Evil Spirits

Step one — put on mask. Step two— take off mask. Step three — banish evil spirits with a make-out sesh. Got it? Good.

3. Because It's Good Luck

A kiss on New Year's Eve is said to bring good fortune to a new relationship, so keep that in mind tonight, everybody.

4. Because Not Kissing Is Bad Luck

No kiss = forever alone, at least that's what the handbook is telling me. So, take this superstition as seriously as you would take walking under a ladder, stepping on a crack, and seeing a black cat.

5. Because It Can Be Really Fun

Sharing any milestone with someone you love, romantically or just as friends, is a perfect excuse to celebrate. If you want your midnight kiss to be meaningful, it will be. If you want to eat a Hersey's Kiss, that's just as good.

Have fun and be safe tonight, everybody!

More like this
What Is The Forest Personality Test? The TikTok Trend, Explained
By Georgina Lawton
The Top Mistakes Scorpios Make In Relationships (& How To Avoid Them)
By Nina Kahn
Are Leo & Capricorn A Good Match?
By Kristine Fellizar
This Creepy TikTok Trend Encourages Out-Of-Body Experiences
By Kaitlyn Wylde
Get Even More From Bustle — Sign Up For The Newsletter