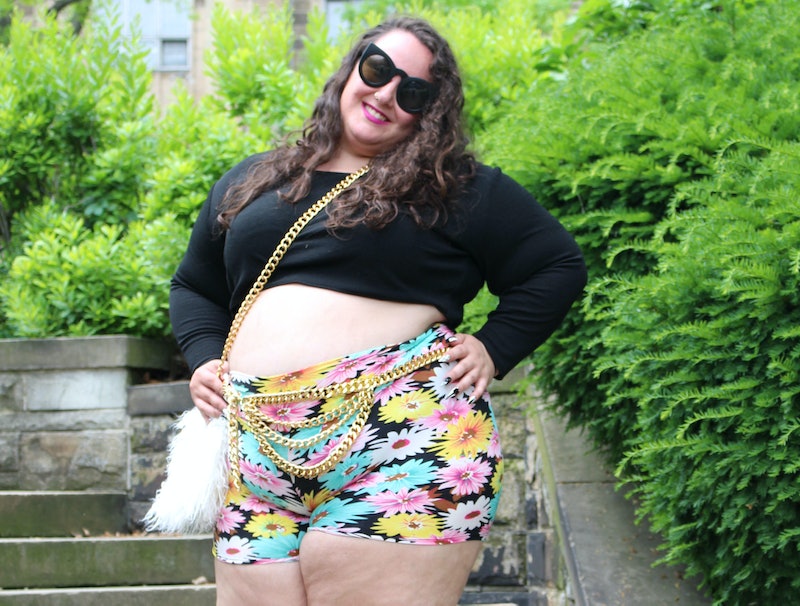 "New year, new you" is one of the go-to slogans you're likely to hear around this time of year. But while I have my share of body positive fashion resolutions, I'm also pretty proud of the current me. Over the past year, I proudly dressed however I pleased. My outfits were unapologetic and I was visibly fat both online and in real life. And I can tell you as someone with obvious rolls, stretch marks, cellulite, and flabby arms that that was no easy feat, considering the fact that people are still pretty uncomfortable with seeing these features. But as I learned when I wore fat positive tees for a week, people's in-person reactions are not exactly the same as they are on the Web.

There is still so much body policing out there from trolls, strangers, friends, and even family members about what I as a fat person should put on my body. I remember sharing a tweet this summer from fat activist Ariel Woodson (aka @Kiddotrue) that said, "Controversial statement: Everyone stop 'caring' about the bodies of other people," and I really think that's a mantra we should uphold. When I started to think back about 2015 and just how much people really cared about what I did with my body and what I put on it, it rang especially true. So here's what happened IRL versus the Internet when I didn't give a damn and wore all the things anyway.

I've been designing body chains for three years. Even though they became more of a trend in the past few years, I'm kind of used to people not getting it. But I posted this photo online multiple times, and there were no negative comments. In fact, a lot of people said that they were happy to see body chains on someone with a body like mine, which felt like a win for fat visibility.

I wore this body chain all summer, though. In person, people asked me about it more from a point of confusion as to how to wear body chains, rather than from a place of thinking I shouldn't wear them. When I wore this particular outfit, a woman did stop me to tell me that my shirt was riding up, when in actuality it was a crop top. Sorry not sorry that my belly-showing was intentional.

This outfit is pretty reflective of my everyday dress. It's comfortable to wear yet still bold in its own right. I think I own more crop tops than full-length shirts at this point, so when I posted this on Instagram, I don't think anyone thought much of it. People commented more on my bestie's boots than my belly-bearing look.

When I wore this IRL, however, I distinctly remember someone screaming at me from their car window while I was walking from the parking lot into a store. I think they called me a fat pig. While I don't remember the exact words, I do recall the negative sentiment about my fat visibly showing. I still felt super confident in this outfit, and even though fat shaming is a part of my everyday life, it still startled me that someone would do this. It wasn't the first time this happened to me and it won't be the last. So I dwelled on it for about five minutes and continued on with my day. I had things to do!

I purchased this bikini specifically for my first trip to Miami. When I look at this image now, all I see happiness and self love in my expression. I swam in the ocean by myself and felt really great. No one said anything to me about my fat body in that swimsuit.

A few weeks later, I would end up in a hospital room with my mom while simultaneously being attacked by a comedian on Twitter who I had confronted about using one of my images for an anti-feminist meme he created. He then shared this image as well.

This photo had represented so much personal self love that in that moment when I started to received so much harassment and fat shaming from him and his followers, I deleted it from my Twitter. Looking back, I wish I hadn't done so. But deleting it and removing Twitter from my phone that day was the self care I needed. It still makes me mad that someone chose to use this photo as a way to attack me. But it certainly won't stop me from wearing that bikini or any other bikini again.

I remember wearing these shorts for the first time, and they were super comfy. I did step on an ant hill while taking this picture, which a stranger definitely pointed out to me, but not a word was said about my short shorts.

Online, I very distinctly remember commenters on Facebook having a lot to say about these shorts, seen originally in this story. Mostly people said that they were too tight and that I shouldn't be wearing them at my size. For the record, these shorts are my size. So let's discuss the real issue here: The sight of my fat thighs in these tight shorts makes people uncomfortable. Even armed with this knowledge, I still had to stop reading comments on my stories after that.

However, something really great happened while looking back at the comments on this image. I saw this remark again, "I absolutely love your style and how confident you are, me on the other hand... I'm very insecure and always worried about what people think about what I'm wearing. I hope one day I will be as confident as you are and embrace my body and love it just how it is!" And while there's a fresh new mean comment at the very bottom, I think this positive one shows why my fat visibility and the fat shaming that goes with that is worth it to me.

I wasn't actually playing basketball in this photo (although I totally did used to play as a kid when I matured earlier than everyone else and being 5'1" was considered tall for my age). When I took this photo at my local suburban playground, people stared at me. But I am pretty used to that. What I wasn't prepared for was what happened online when I posted this image.

I shared this photo and a few others taken in the same outfit and setting on Tumblr. I put most of my outfit photos on there, so I didn't think too much of it. But then suddenly, these images were being reblogged by fat shamers who were really mad about the fact that I — as a fat person — was shown in an athletic setting.

I am shamed by people who assume I don't work out. But now the fact that I was on a basketball court as a fat person was also a problem. And then it got worse. One of the people who reblogged this said he wished I would kill myself. This was the first time I heard this (but sadly not the last) from someone online who knew nothing about me other than the fact that I was fat and on a basketball court. Months later, it hurts to think about that moment. But I survived. And thankfully, Tumblr finally instituted a block button a few weeks later.

I can confidently say when I wore this dress I designed in real life for the first time that I had no idea what kind of storm was in store for me online. The photographer I worked with on this shoot, who is her 60s, loved it and ordered one for herself and my fellow model April, who is in her 20s and who gushed over it too. I recently wore this to my family Christmas party and everyone had nice things to say about it.

But online, this dress started a war between people who thought that I was betraying plus size women for wearing something that wasn't "curve-hugging." The comments section on this photo and any image I shared of this dress was pretty heated, both in support and in disgust. People told me that "the designer should be fired," and that was one of the nicer comments. But plus size fashion bloggers and many others stood up for me as well, which sparked a really valuable discussion about plus size fashion equality.

I love dressing up and being over-the-top when it comes to fashion, but I am also comfortable enough with my body that I don't always feel the need to look put-together as a fat person just so that people won't call me lazy. When I wore this IRL, I had just driven six hours to Chicago, so I had to be comfortable. I am not about to wear a bodycon on a six-hour car drive. Give me some leggings, a tee, and my favorite orthopedic $3 shoes from the thrift store. No one had anything to say about this outfit, as far as I can remember.

Looking back at this photo, I expected not to see anything in the comments. I was just wearing leggings and looking pretty basic, so what I saw surprised me in a good way. A comment reads, "You are such an inspiration and all the people you talk about are too. Honestly this Instagram helps my insecurity and anxiety, it just magically goes away when I see all these beautiful pics." As someone who also lives with anxiety, I remember now how first seeing that comment made my day.

While wearing short shorts or a bikini may not really seem like a radical act to some, it becomes both a controversial and inspiring statement to wear what you want when you are a visibly fat person. The negativity is just a reflection of a society that isn't ready to recognize the humanity of fat people. But without challenging these norms, this won't stop. So if my thick thighs in a short skirt is a radical act helping to remove the stigma of fatness, you can bet I will keep doing it.