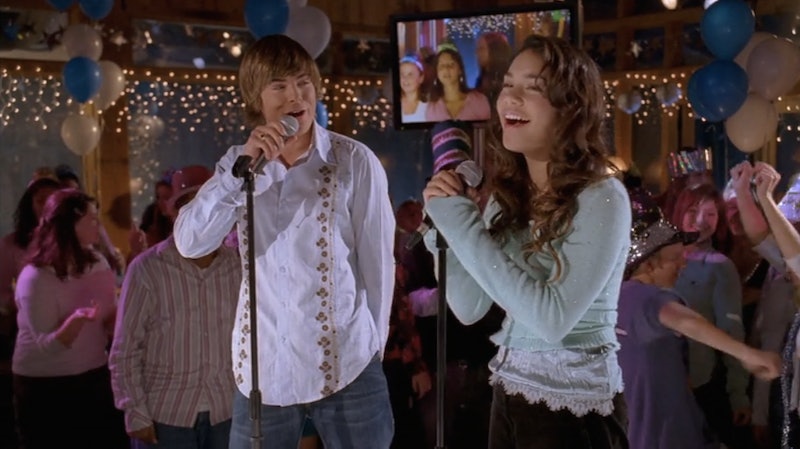 As another year comes to a close, I’m getting introspective and really thinking about... 2005. See, all Wildcats already know this, but New Years Eve 2005 was the day Troy and Gabriella from High School Musical met, an epic night culminating in top tier karaoke-ing. So tonight isn’t just New Year's Eve, or the end of 2015, it’s the 10th anniversary of Troy and Gabriella meeting. Which should make you feel old and very, very sad... because there’s no way this or any other New Year’s will ever be as great as there’s was.

Now, I’m sure you’re momentarily perplexed. When we first check in on the couple, Troy is playing basketball with his dad (a pretty standard night with the Bolton’s) and Gabriella is legit reading a book. This doesn’t seem anywhere as cool as the new wave dance party in Brooklyn you’re going to, I get it. But this night, which set the entire High School Musical story in motion, is constructed of both holiday magic and hilarious fashion. Therefore, it is perfect, and all other New Year's pale in comparison.

Unconvinced? Fine. Here are all of the reasons that Troy and Gabriella’s end-of-2005 will inevitably still be greater than our end-of-2015s.

1. It's At A Majestic Ski Lodge

Do you see this place? It's the kind of wondrous vacation spot that you'd only see in, um... well, Disney TV movies. I can smell the chemical snow and hot cocoa from here.

2. All The Party-Goers Have Really Cool And Dignified Headwear

This is coming from the girl who's wearing a silver and green "Happy New Year" tiara as she types this.

3. The Spotlight Is On Troy And Gabriella, Predicting Their Inevitable Rise To Power

Look at that, getting chosen to sing karaoke in a room of big-hatted extras. Everyone likes to feel special and important, and usually you have to start dancing on tables to get that kind of New Year's Eve recognition.

4. Your Hair Will Never Look This Good

It isn't that your new holiday dye job isn't cute and all — auburn really brings out the color of your eyes — it's just that there's no use competing against Zefron's pre-Bieber Bieber cut.

5. It's Always Good Getting Out Of Your Comfort Zone

You can lie to yourself and say you really want to see Gogol Bordello for the fifth year in a role, but maybe you'd be happier if you were the one on stage like these superstars.

6. Nothing Is More Rewarding Than Discovering Your Life's Passion In Front Of A Bunch Of Awkwardly Dancing Teenagers

7. You Never Get To Meet Someone You Have Such Automatic Chemistry With On This Holiday

You get to meet someone who's like, halfway attractive looking after three glasses of champagne so you can totally justify hooking up. Not someone you can spend three movies with, though.

8. This Baby's Whisper Of Snow Gently Falling On Their Heads

Enough to put magic in the air, yet it's still warm to walk around in like, a cropped cardigan and be fine.

9. Fireworks So Legit It Looks Like A Small Galaxy Exploded

Infinitely better than staring at the Times Square ball drop yet again.

10. No Pressure To Make Out With Your Pretty New Crush

This is mostly because they are literal children here and don't kiss until deep into the second film but whatever, it's still nice to not feel the need to swap spit.

11. And Trading Numbers With Someone You Actually Want To Call The Next Day

Once the flip phones come out they create one of the most epic couples in tween movie history. SIIIIIIGH.

So there you have it, folks. Solid evidence that Troy and Gabriella will forever be the king and queen of New Year's Eve. Good luck with your own celebration, though, hopefully the holiday will truly bring the start of something new.