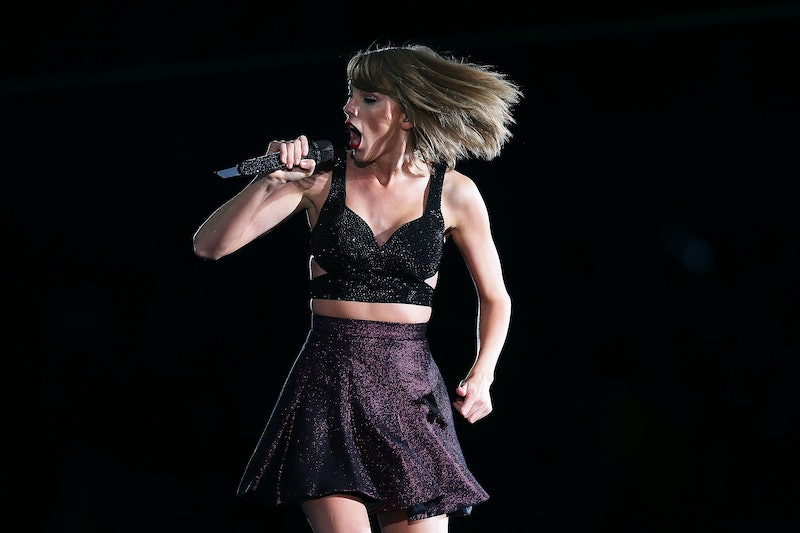 Taylor Swift's new music video for the latest single off her hit album 1989 dropped during ABC's New Year's Eve celebration and it was INCREDIBLE, but the best part was a big surprise — the 'Out of the Woods' video took a creative, feministic departure and didn't feature a male lead. Like most of Swift's songs, the song is centered around a relationship, but the video focused almost exclusively on Swift.

There were a few other characters in the video though, a pack of wolves who chase Swift through several landscapes, including a hostile forest and a snowy cliffside. The fact that it was a pack of wolves rather than a single wolf is actually an important detail too. A single wolf might have symbolized the guy being referenced in the song, but the pack of wolves is more symbolic of Swift confronting own inner demons. The video start with flashing text reading 'Lost. Him.', likely playing on the expectation of featuring a romantic lead. But really, the text was out of context of the quote that Swift featured on her 1989 album art and at the end of the video — "She lost him, but she found herself, and somehow that was everything."

Swift teased fans ahead of the premiere with this Instagram post on Wednesday night, showing a fierce look and gritty dark photography. The picture, from the section of the video when Swift is fighting through the forest to reach herself again, fits the darker mood of the song, which shows off Swift's lower register and husky tones. The beautiful cinematography, stunning visual effects and exotic scenery, which was shot on location in New Zealand, perfectly complements the song.

'Out of the Woods' was co-written by Jack Antonoff of Fun. and Swift's collaborator Max Martin, who also wrote 'Send My Love' from Adele's new album 25. It's the sixth single off 1989, which holds the record for the best selling album by a single artist in 2014. The album also made Swift the first artist to have three consecutive albums go platinum immediately— 2010's Speak Now and 2012's Red both sold over 1 million copies in their first week.

So far, each of the singles from 1989, 'Shake It Off', 'Bad Blood', 'Blank Space', and 'Wildest Dreams' 'Style' have gotten music videos. All of the videos have been insanely popular, with over 300 million views each on Swift's official YouTube page, so it's possibly that every song on the album could get a music video.

The video is visually stunning and totally loaded with symbolism, so it's sure to break some online records. 'Out of the Woods''s surprising creative leap in focusing exclusively on Swift is an inspiring change and an awesome feminist statement.