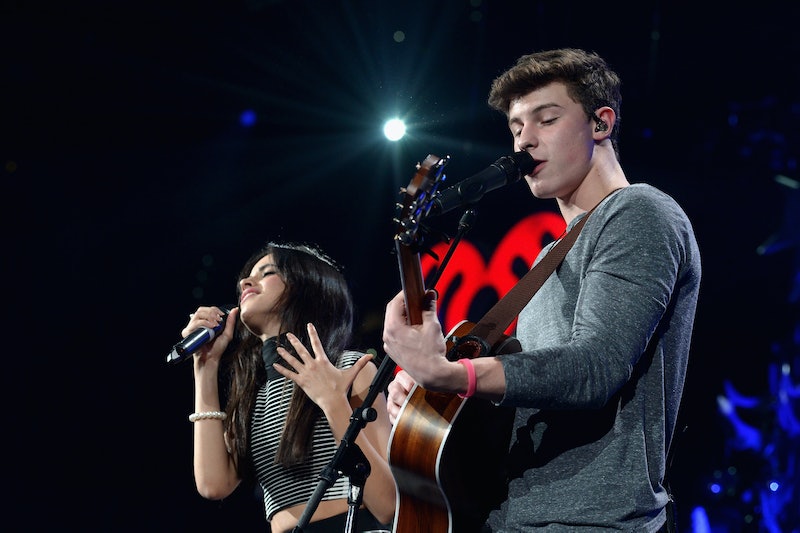 It's been a big year for singer Shawn Mendes, who went from being a Vine musician to mainstream superstar. He has even been crowned one of the biggest breakouts of 2015 by Rolling Stone magazine. And to cap off his incredible year, Shawn Mendes performed his hit "I Know What You Did Last Summer" with Camila Cabello on Pitbull's New Year's Revolution and they totally killed it with an amazing live duet of the song. If you didn't think 2015 was the year of Shawn Mendes before, you'll think so after seeing this performance.

Fifth Harmony singer Cabello took the stage in a classy, but sexy long dress, while Mendes kept it casual in a T-shirt, jeans, and an acoustic guitar strapped on his shoulder. The duo performed their collaboration in front of a backdrop of pouring rain and stormy clouds — matching the images from the song's music video — while standing on the stage in Bayfront Park in sunny Miami, Florida. Cabello danced and twirled as Mendes rocked out on his guitar to "I Know What You Did Last Summer." Of course, the performance would be awesome, considering the song was co-written by the two while they were backstage at Taylor Swift's 1989 World Tour.

"There were like 100 people in my dressing room at the time, and it was madness back there, but I had this guitar and I was just jamming out, and we basically wrote a pre-chorus and a chorus in like 30 minutes,” Mendes said about the song in a behind-the-scenes YouTube video. “And we planned to go into the studio, and it was like an 11-hour studio session where we finished writing the song." Who knew that 1989 could even give us musical gifts from folks who aren't Taylor Swift?

More like this
Sadie Sink Would Escape Vecna From 'Stranger Things' With This Taylor Swift Song
By Grace Wehniainen
What Is Ariana Grande's Net Worth? When It Comes To Money, She Has No “Problem”
By Hugh McIntyre
Kate Bush Reacts To “Mad” Revival Following 'Stranger Things' Cameo
By Sam Ramsden
The Stranger Things 4 Soundtrack Spans Classic Eras & Styles
By Brad Witter
Get Even More From Bustle — Sign Up For The Newsletter