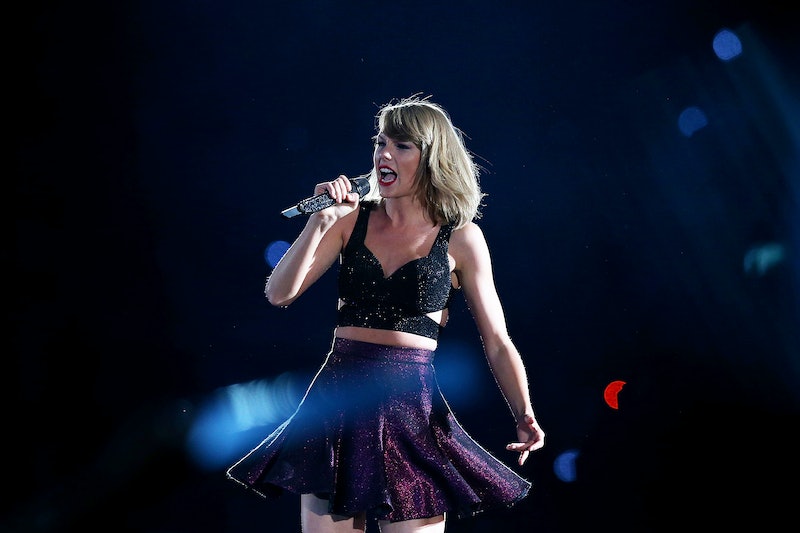 It might be New Year's Eve, but some of us prefer to re-watch Taylor Swift's music video for "Out Of The Woods" on repeat to welcome in 2016 — myself included. The new vid dropped during ABC's Dick Clark's New Year's Rockin' Eve on Thursday night and sent fans into a frenzy. Upon repeat viewings, you might ask yourself what the vines spell out in Taylor Swift's "Out Of The Woods" video and if Tay is trying to send us a message. No, it doesn't spell out which of her past relationships influenced the song, but it is something clever: The vines on the beach spell out "Out Of The Woods." Hey, that's the name of the song!

"Out Of The Woods" is Swift's fifth single from her smash hit album 1989, which ruled the charts in 2015. Her new music video begins with Swift standing on the beach as magical vines sprout up from the sand and water. They surround her, but not without a message: The title of the song. The rest of the video shows Swift on the run from wolves and magical mean growing vines, which chase her through snow, ice, jungle, the beach, fire, and mountains. The vines are relentless — and pretty smart, if they even know the name of the song.

"Out Of The Woods" is a music video with many stunning visuals, including gorgeous landscapes of New Zealand. But the video also plays a lot with words and hidden meanings — the vines are just one example. The music video begins with the word "Him" on-screen, but who's is he? Is he also chasing Swift? Once the video ends, the mystery is cleared up a bit with the closing words: "She lost him / But she found herself / And somehow that was everything."

And the interpretation of that statement is up to you. Watch the video below.

More like this
'The Summer I Turned Pretty' Using “Cruel Summer” Has Twitter Begging Taylor Swift To Release A Music Video
By Radhika Menon
Taylor Swift's “Carolina” Theme For 'Where The Crawdads Sing' Soundtrack Is Here
By Jake Viswanath
Taylor Swift Fans Caught A Possible ‘1989’ Clue In Her Latest Awards Show Speech
By Grace Wehniainen
Taylor Swift Explained The Ambiguous Ending To ‘All Too Well: The Short Film’
By Grace Wehniainen
Get Even More From Bustle — Sign Up For The Newsletter