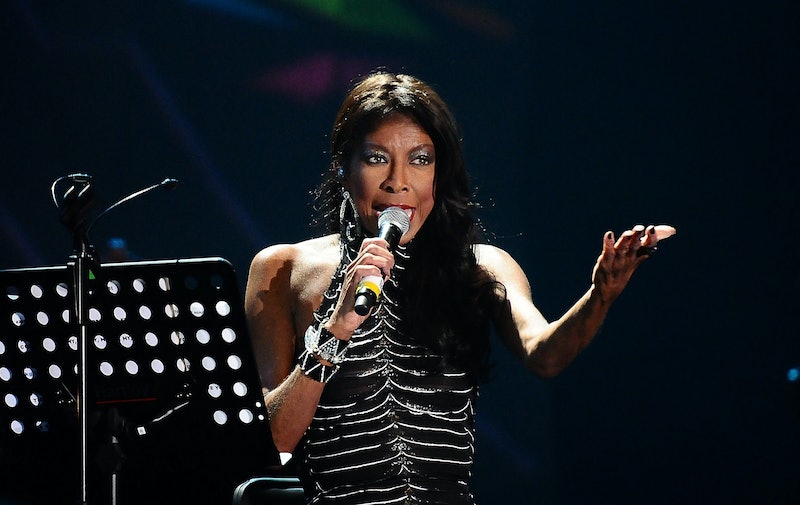 The world lost a great musical talent on Thursday, Dec. 31 when singer Natalie Cole died at the age of 65. The R&B artist's family spoke out on Friday saying Cole died because of compilations from ongoing health issues. "Natalie fought a fierce, courageous battle, dying how she lived ... with dignity, strength and honor. Our beloved Mother and sister will be greatly missed and remain UNFORGETTABLE in our hearts forever," her children said in a statement referencing one of her hit songs "Unforgettable." Cole, daughter of famous musician Nat King Cole, had an enormous amount of talent and toured as recently as August 2015 before she was forced to cancel a string of performances due to her ailing health. But, Cole's final recorded performance on Aug. 18, 2015 in Manila, Philippines will take your breath away.

The image quality in the videos isn't the best, but her voice is. Even as she dealt with those ongoing health issues, she took the stage by storm to belt out several of her most memorable hits including "This Will Be (An Everlasting Love)," "Miss You Like Crazy," and "Unforgettable." Cole was a guest at the concert hosted by David Foster as part of his "The Hitman: David Foster and Friends Asia Tour" which also included artists like Boyz II Men and American Idol winner Ruben Studdard.

But, 65-year-old Cole stole the show with her hits as she belted the numbers out. When you watch the performances you can tell she isn't in the best of health, David Foster has to help her walk out, but her voice is unwavering in its strength and passion. The singer will be greatly missed, but at least we can remember her talent with this final concert performance featuring some of her greatest hits.

"This Will Be (An Everlasting Love)"

One of her most-recognizable numbers, Cole hit every note perfectly.

Though not as well-known as some of her others, this Cole song is just as delightful to listen to.

And, unforgettable she will always be.