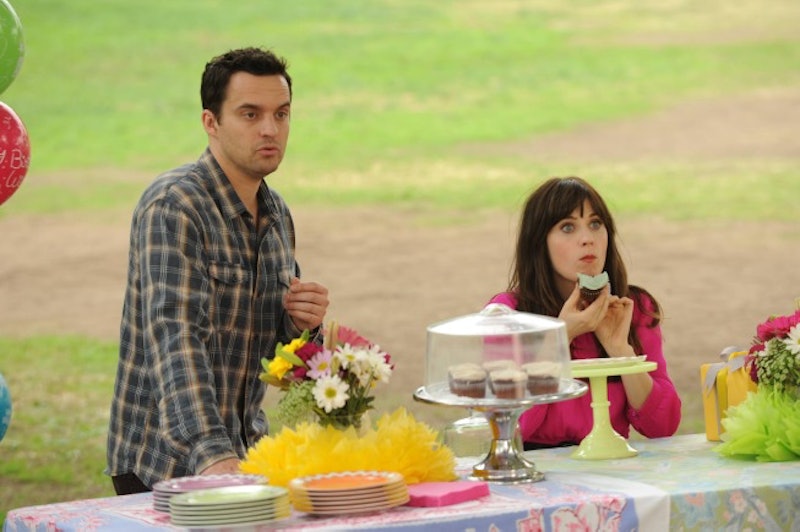 It's been written about before, and it will be written about a thousand more times in the coming years: When New Girl wrote in that kiss between Nick and Jess last season, there were a lot of questions surrounding how they were going to pull off everything that would now have to follow. But New Girl didn't just make a leap with their will-they-won't-they that night: They nailed the show's emotional core. And, in a tangential sort of way, that's what made this week's "Birthday" work on all the levels that it did.

Nick Miller was a mess of a man. He didn't know how to make decisions that would actually lead to his happiness; he always just stuck to the ones that felt right in the moment in his weird, twisted gut. He hid from the things that made him actually feel good because it felt somehow more comfortable to pretend not to care. He was, in fact, a bit of a coward.

That's part of what made that initial kiss so noteworthy: It was the realization of a year and a half of sexual tension, sure, but it was also Nick Miller acknowledging to himself that this connection with Jess was something that he wanted.

This episode was, of course, not just about Nick Miller: Zooey Deschanel's Jess has rarely been better than in her quick pivots between weepy and excited in this episode. Her manic earnestness, for its part, played perfectly with Nick's absolute lack of knowing what to do with Jess — and her deeply embedded expectations for her birthday — to pass the time until the lavishly emotional surprise party he planned for her that night.

It's interesting to note that this episode, the season's 13th, is airing pretty close to a year after last season's landmark "Cooler," in which Jess and Nick share that aforementioned kiss. With that in mind, it's even more interesting to look, then, at how healthy and content both of them seem to be in this relationship that seemed surely destined for spectacular failure. And the fact that that failure has yet to come seems like nothing but a blessing in this episode, wherein we get to witness once again that dynamic which made their sexual tension work the way it did and which continues to make their romantic connection work just as well.

This show has spent a good portion of this season rearranging their board, shuffling characters around and adding in new ones, and with mixed results. But this episode — with Jess and Nick's birthday drama, Cece's complete lack of bartending skills, etc. — showcased that these people (the writers and the cast) really do know what to do with these characters when the chemistry the show is built on is working right.

And did you catch that flip Coach did when he and Winston were racing around the apartment to hide the party from Jess? Damon Wayans Jr. already gets a lot of cred as a comedic talent (as he should), but he still feels wildly underrated in his physical comedy. Never forget the Happy Endings twirl.

This episode laid a lot of things bare: The fact that no matter how hard Nick tries (and he tries really really hard, and never any harder than when that trying is for Jess), he's never going to be a perfectly put-together person who can pull off everything without a hitch. Jess is very actively aware this episode of how her instinctual idealism may not always match up perfectly with the realities of the world.

Nick's trying does pay off often, though, and often in genuinely sweet ways, as we saw with his grand video gesture in this episode. He knows that Jess is someone who needs constant validation (much like he does, though he's more loathe to admit it) and open-hearted love, and so that's what he gives her, putting everyone who she loves up on a screen to tell her they love her. And that line of his at the end of the video? That "This is the coin I had in my pocket that first night we kiss. I always have it with me"? There was no way that wasn't going to slay her. Or me, for that matter — it's straight out of the Luke Danes/Lorelai Gilmore handbook, and that works pretty damn well for these two.

There's a lot of talk when will-they-won't-theys get together that that marks the death of any true chemistry or intrigue within that relationship. That is, to put it simply, utter bullshit that comes from years of witnessing lazy writing. If you need proof that a TV pair's dynamic can be just as fun to watch once they've coupled up, just look at Nick and Jess: They'll still unwittingly steal birthday parties from 9-year-olds, and they'll feed each other sewer fish; they'll also spur each other to grow as characters, never abandoning the things that made them so beloved in the first place, but rather shaping themselves into more realistic, dynamic humans. Humans who are really good at kissing onscreen.

I don't know where Nick and Jess are going — the way the writers were talking at the end of last season I was expecting for them to have crashed and burned by this point this season. I'm glad they haven't. This is actually more interesting.