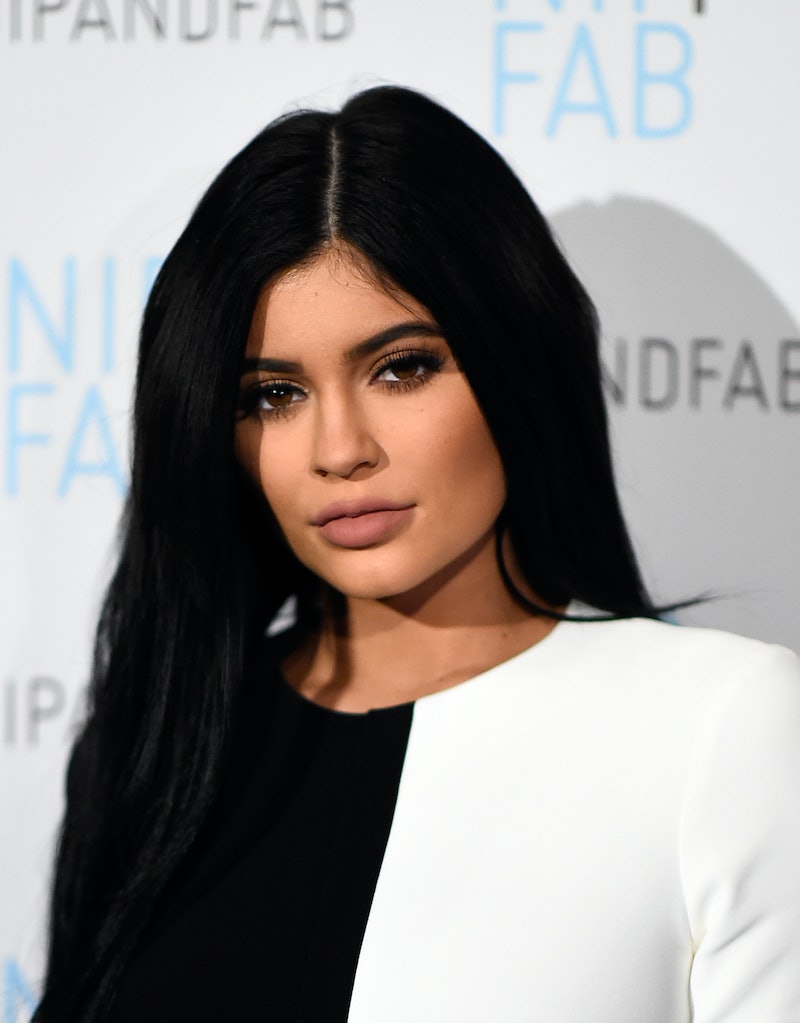 Who could have ever guessed that Kylie Jenner's lips were a source of insecurity for the 18-year-old reality star? When many of us think of the youngest Kardashian, we don't necessarily conjure up the term "self-conscious." With a constant stream of selfies on Instagram and fun videos on Snapchat, you'd think the gal had this confidence thing down-pat. But in a recent interview with Elle UK, Jenner admitted that she tends to hide her lips in photos and videos not for style or strategic hot angle purposes, but because she's shy about them.

Seeing as they're one of her most talked-about and coveted features, it's difficult to imagine her pout being anything but a source of self love. I mean, Jenner's Lip Kits sold out in less than 60 seconds. They went faster than Coachella tickets, people. Her lips turned her into a beauty mogul of sorts, brought the nude and brown lippie trend back, and I can testify myself that she's the sole reason I started buying lip liners. So, yeah. From an outsider's perspective, it's easy to think her lips must be her most beloved feature of all. But this is precisely why we should never make assumptions, y'all. As Jenner told Elle on Dec. 30, "I was so insecure about my lips. Even now I always post photos where my finger is always in front of my mouth… It’s a habit. I would always cover my lips.”

This explains why oftentimes her go-to pose features Jenner's hand touching her mouth. As most humans should understand, letting go of insecurities can be a tough thing. So Jenner's forthcoming nature about her own gives her a rather relatable quality. She continued to explain to Elle, "I couldn't even talk to people. Or guys. Like, [I'd be thinking]: 'I know you're looking at my lips, but you so don't want to kiss me right now.'"

That insecurity led her to try out lip fillers, as she admitted on an episode of Keeping Up With The Kardashians in May of 2015. In a clip posted by E!, the star said, "I have temporary lip fillers, it's just an insecurity of mine and it's what I wanted to do. I wanted to admit to the lips, but people are so quick to judge me on everything, so I might have tiptoed around the truth, but I didn't lie."

Most of us can relate to trying to cover up our own perceived flaws, so here's hoping Jenner puts down her hand and learns to embrace and love her features this year (along with the rest of us).

To start us off on the right body positive mark in 2016, here are all the times Jenner didn't hide her smile behind her hands.

1. When She Full-On Smiled At Us

Posted two weeks ago and caption-less, Jenner appeared to be hanging out at a low-key restaurant, without much makeup on, and completely comfortable in her skin.

2. When Taking A Friend Selfie

It's hard to feel insecure when you've got your pal next to you, making you feel fly.

3. During A Moment Of Boredom

Kudos on Jenner for not hiding her mouth in this shot, while bored at home, right before tearing into her dinner. Here's hoping she gets prouder and happier with what she has in the months ahead.