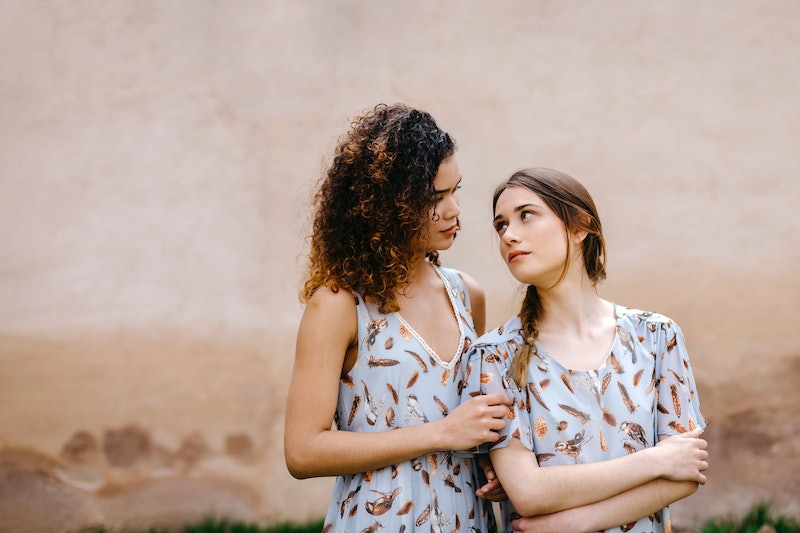 Ever noticed that, after a few years together, your long-term partner starts to do the same things as you? Perhaps they react the same way that you do to various stimuli, or even talk in the same way? No, you are not somehow becoming pod people together, and yes, you are still maintaining your own identity. Long-term couples act alike not because they want to become really annoying to their mates and terrify their single friends, but because they're obeying a basic rule of human psychology and neurochemistry: we're exceptionally good imitators — of everything from speech to body language to emotion. And the longer we do it, the better we are.

Experience is partially responsible for behavioral similarity among long-term couples; basically, they've been together for ages, so they share a lot of history that reflects on their everyday life. ("Remember that time" becomes a lot more reflexive when you've got years to call on.) And they also have their own personal language, shared by nobody else; in my article on baby talk, I touched on the fact that humans baby talk to partners as well as babies, because it's one of the most intimate things we can do with language. And research shows that the more harmonious various bits of a marriage are (and more full of mimicry), the more likely it'll be happy. So, fine — it's OK to be a bit of a pod person, if only for the sake of empathy and long-term satisfaction.

Here are five reasons why couples begin to act like each other the longer they're together. Of course, all of this is still no excuse for answering every question with "we" or calling each other "Snoogleface" in front of your friends. There's no scientific explanation for that; that's just being annoying.

1. We Are Initially Attracted To People With Similar DNA

If you've always been raised to believe that opposites attract, you may be wrong on a biochemical level. According to a landmark study done in 2014 at the University of Colorado, we're extremely likely to pick long-term partners with DNA very similar to our own. The study found that, on average, married couples were far more likely to have similar DNA than two strangers paired together at random. It looks as if, unconsciously or not, we like people who came from the same section of the gene pool as us.

And we also like people who are similar to us in other ways. It's now widely accepted that people of similar educational levels often pair up; the New York Times even ran an article recently blaming this tendency (which is called assortative mating) for entrenching inequality, as less-prosperous and educated people have fewer chances of getting a powerful mate and thus levering themselves up via marriage. So the starting point is a person who already looks, moves and thinks a little bit like us. But it does go further as the years of coupledom stack up.

Emotional contagion sounds like a terrifying disease — but actually, it's a process by which many of us grow to feel the same emotions as those around us, particularly our spouses and best friends. Simply put, the longer you spend with somebody, the more you'll start to be unconsciously influenced by their emotional states and begin to reflect them back.

We're great mimics, and we're also very prone to picking up on cues about a person's emotional state, even if we're not conscious that we're doing it. The states of emotional contagion are: talk to somebody feeling a certain way; start to mimic their behavior, tone and actions; and gradually "converge", or start to share the same feeling. It's known as a "ripple effect," and it's been documented in everything from group work at universities to parent-child interactions.

We're not entirely sure how it works yet (hypotheses include the idea that our facial muscles mimic expressions we see in other people, with smiles sparking smiles), but the science seems pretty clear: spouses will often start feeling the same emotions purely because they spend a lot of time together.

The mirror neurons of our brains are the specific parts that enable us to mimic peoples' actions. They're where the brain performs the normal "mirroring" in human behavior: when we're talking to somebody, we unconsciously mimic their actions and posture to make them feel more comfortable and get them to like us more. And a brain-imaging study done in 2015 proved something interesting: the mirror neurons in the brains of people in good marriages are more active when they try to figure out their partners' emotional puzzles.

Basically, the study scanned the brains of people as they watched their spouses react in ways that didn't seem to make sense: looking happy as they talked about losing their job, for instance. (It was all a trick with video captions.) In the brains of people who said their marriage was great, mirror neuron activity jumped; the spouse was actively trying to understand why their spouse was so happy, and trying to emulate it themselves. Mirror neurons and their imitative function seem to be a part of how we feel empathy, and that may be a key to a happy marriage.

After six years with the same dude, I am now far more prone to making puns than I was before we got together — though I haven't yet stooped to saying "groovy" or pronouncing yoghurt in the British way (because it's wrong). It turns out that couples really do begin sound similar over a long period of being together, because their individual vocabularies and syntaxes merge. It's called language style matching, and humans do it across all relationships, from those we have with coworkers to those we have with our baristas. We're actually more likely to be compatible if our language styles are similar in the first place, according to a 2010 study, and it only gets more enmeshed as the relationship continues.

It turns out that lovers mimic each others' languages (down to the pauses and lilts in various words) more thoroughly in times of happiness, and become less linguistically in-sync when the relationship is having a hard time. (Style-matching in couples has been tracked all the way through the poems of Elizabeth Barrett Browning and her spouse Robert Browning, in research conducted by the University of Texas, for instance.) Couples not only share personal jokes and private history; they genuinely do just talk alike.

5. We're More Inclined To Change Our Behavior If A Partner Does It, Too

Couples not only act and speak alike; it looks as if they also change in the same ways, at least when it comes to habits. A 2007 study from Yale University found that if one spouse had quit smoking, taken up running or begun to consume a healthier diet, their partner became more likely to do it as well. In the case of smoking, the partner's likelihood of quitting actually rose five times. It turns out that unconscious peer pressure isn't just for teenagers: it's significantly harder to justify staying in bed and chain-smoking all day if your partner's off jogging round the track, training for a triathlon. We're just born imitators, and relationships show that in high definition.

More like this
50 Valentine’s Day Instagram Captions To Post If You’re Single
By Jessica Booth, Lexi Inks and Carolyn Steber
30 Sweet Valentine's Day Caption Ideas For Long-Distance Relationships
By Syeda Khaula Saad and Carolyn Steber
5 Signs You Have A Toxic Relationship With Yourself
By Lexi Inks
21 Galentine’s Day Memes To Celebrate Your Best Friends
By Meghan Bassett and Mia Mercado
Get Even More From Bustle — Sign Up For The Newsletter
From hair trends to relationship advice, our daily newsletter has everything you need to sound like a person who’s on TikTok, even if you aren’t.