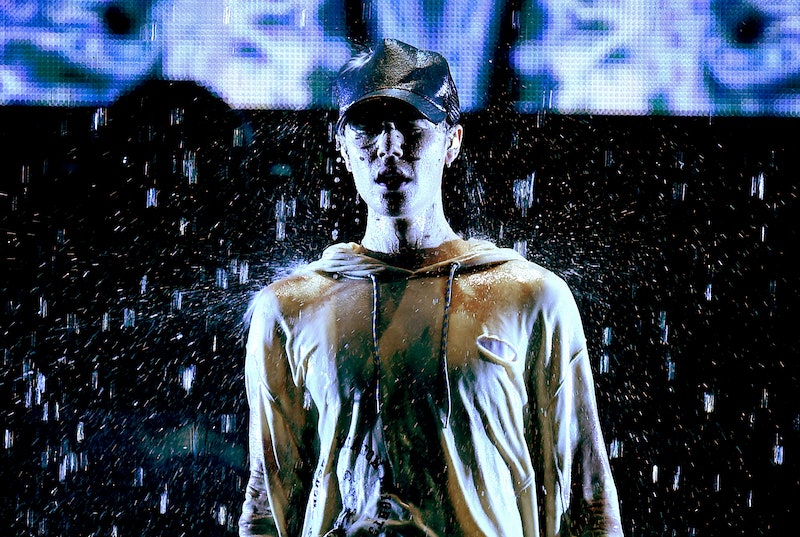 Do you remember when we all thought that Justin Bieber and Insert Female Model Friend Here were dating? Actually, you might not, considering how many people Bieber has been connected to in the last month alone. Well, you can forget that I even brought that up, because Justin Bieber and Hailey Baldwin were kissing in a photo that the pop singer posted to his Instagram on Sunday, because the world isn't confused enough about his current relationship status. It's hardly the first time that Baldwin and Bieber were romantically connected in the press, and they were seen vacationing in Anguilla at the same time that Harry Styles and Kendall Jenner are also vacationing in Anguilla, leading to starry-eyed talk of double dates among their fans. But should we take this photo at face value, and thus believe that Baldwin and Bieber are together? Well, not so fast.

After all, this is hardly the first time that Bieber has posted an intimate shot of himself with a female friend. And, every time that the singer does so, we're consumed for weeks with the idea that he might be dating this model or that singer. Quite frankly, the number of relationships that Bieber has had is exponentially disproportionate to the amount of relationships that Bieber has been rumored to have as a result. His last confirmed girlfriend was Selena Gomez, and I think we should probably wait for Bieber himself to confirm that Baldwin is his current confirmed girlfriend before we start getting excited or upset.

I mean, this is pretty damning evidence. This looks less like a friendly smooch and more like a passionate kiss on the dance floor or something. Their body language is rather intimate for two people who look to be in the middle of some kind of routine, or at some kind of concert, and, well, I don't generally tend to put my mouth on my friends' mouths. However, the vacation that the pair are on also includes Bieber's family, and, as intimate as their body language is, it's also very open as if showing off in a playful kind of way. This potentially romantic Instagram photo was followed by a second photo of the pair, this time sitting on a couch. Baldwin is gazing into the camera while Bieber is gazing... at her. What does it all mean?

Impossible to tell at this point, because neither Bieber nor Baldwin have come forward to say that their relationship is anything other than friendly. As Bieber has been rumored to be connected to everyone from Kylie Jenner to Kourtney Kardashian (no, really), all we have at this point is speculation and intimate Instagram photos. And those two things were all you needed to confirm that Bieber was no longer single, he would have like five girlfriends simultaneously right now. So relax, take a breath, and wait, Beliebers. If Bieber had something to tell you, he'd have told you already.

More like this
Justin & Hailey Bieber's Bond Is "Unbreakable" Amid His Ramsay Hunt Diagnosis
By Bustle Editors
Selena Gomez Is Fine Being Single, But She Still Manifested Romance On 'SNL'
By Martha Sorren, Jake Viswanath and Jack Irvin
Are Cancer & Cancer Compatible In A Relationship?
By Kristine Fellizar
8 Flirty Games To Play Over Text With Your Crush
By Lexi Inks
Get Even More From Bustle — Sign Up For The Newsletter