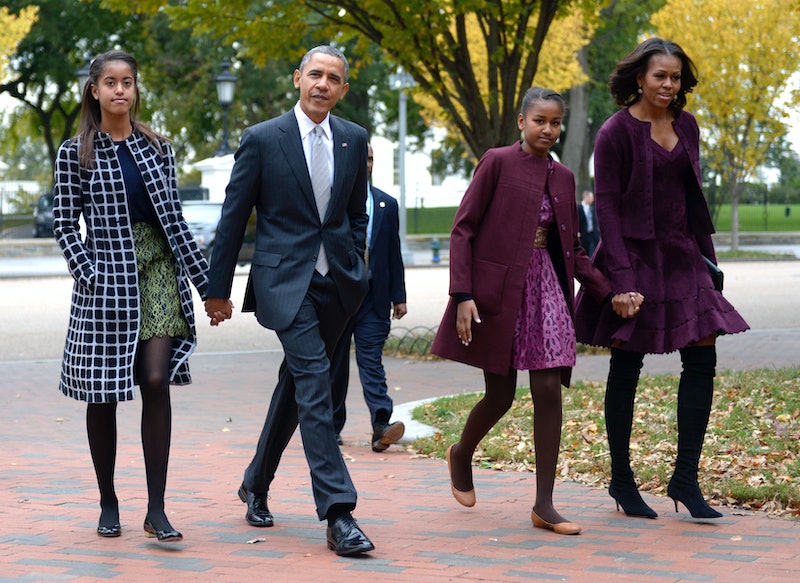 It’s hard enough being a teenager when your parents are (pretty much) normal, but imagine working your way through adolescence with your dad serving as President. (“Ugh, Dad, your Ban Ki-Moon impression is so annoying!”) And for Obama's first daughters, 15-year-old Malia and Sasha, 12, their adolescence is rife with, um, structure. Just what every teenage wants!

Michelle holds a lot of the reins when it comes to the whole parenting thing, although Barack reportedly eschews state dinners to have a good meal ‘round the table with the fam. According to a 2012 New York Times story, Malia and Sasha have some pretty strict rules: They have to do a write-up about each trip they take, which makes their vacation-filled life suddenly seem a lot less fun.

There’s no computer use (unless for homework) or television on schooldays. Sasha’s not allowed to text her friends until the weekend. And both of Michelle's daughters have to play sports: Michelle chooses one for each of her girls, and they get to choose the other. It’s pretty hard to be a champion of the Let’s Move campaign if your own progeny isn’t living up to standards, we guess.

Apparently all the rules stem from Barack’s own upbringing, which wasn’t exactly stable: “I don’t think we’re being particularly conservative — we’re actually not prudes. . . . But, as parents, what we have seen, both in our own family and among our friends, is that kids with structure have an easier time of it.”

First off, we kind of enjoyed that President Obama said "prude." Secondly, he probably has a point: When your day includes commitments to things larger than yourself, it not only prepares you for the big scary career world, but teachers you basic values like consideration and reliability.

In any case, at least it seems to be working. Discipline, focus, studies, etc. are all good things, and it’s definitely a boon for a family that’s in the limelight so much, even if the private details of the family aren’t incredibly scrutinized in the press. But as Quartz points out: “Structure like this is undoubtedly as much for the parents’ benefit as for the kids’.”

And in a family where even family vacations to Hawaii lend themselves to political speech-making and press ops, every little structure helps. Regardless, we’re excited in advance for the day Sasha brings home a date to meet Dad.

More like this
What Is Barack Obama’s Net Worth? He Makes *Way* More Now As An Ex-President
By Hugh McIntyre
10 Times Diana & Meghan Spoke Similarly On The Royal Family
By Sophie McEvoy
Scott Disick’s First Time Around Kravis Was “Awkward,” To Say The Least
By Jake Viswanath
Rihanna Is A Mom Now After Giving Birth To Her First Baby With A$AP Rocky
By Ananya Panchal and Jake Viswanath
Get Even More From Bustle — Sign Up For The Newsletter