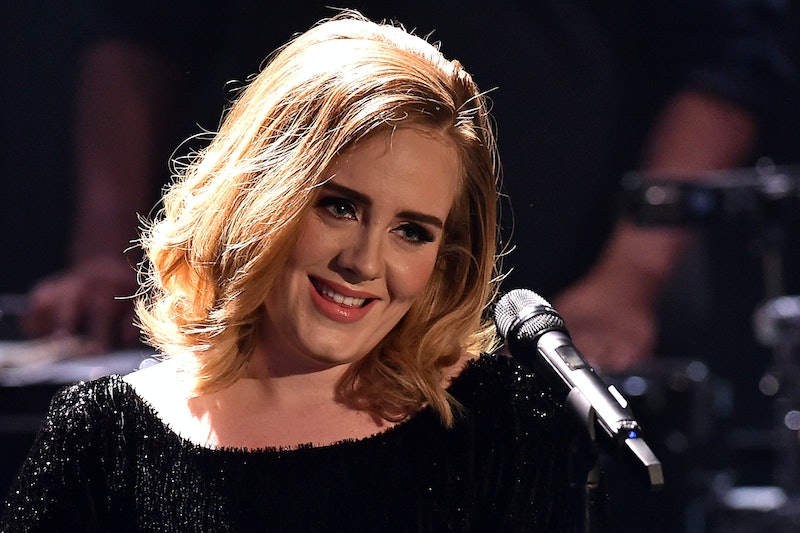 Despite the opinions of that one guy on your Facebook newsfeed you haven't spoken to in five years, who is "is tired of hearing albums from Adele about being sad all the time," she's officially taking over the world. How do I know? Adele's 25 has been named the best-selling album of 2015, according to Billboard. And no one should really be surprised; after all, the album sold 3.48 million copies in just its first week. It would seem we just can't get enough of Adele's soulful tones, whether she be crooning about a break-up or in this case, a make-up.

At the end of 2015, 25 made it out with 7.44 million copies sold. This makes it the best-selling album since Confessions by Usher, which, in 2004, sold 7.98 million copies to adoring fans (that album makes me swoon and giggle just thinking about it). But the best part about Adele getting this honor is that she's not a hunky guy making R&B mainstream. Instead, she is an honest, relatable, talented young woman, who tells stories that we can all identify with through her songs. And while this latest honor is certainly no surprise, it is incredibly impressive, for the seven reasons below.

The best-selling album of 2015 only came out two months before 2015 ended? That holiday shopping rush must have really helped Adele out.

2. She Beat Out Justin Bieber And One Direction

If there is one thing people love, it's boy crooners. This year, though, Adele showed the world that you don't have to be a cute guy with killer dance moves to sell millions of records. That being said, both Purpose by the Biebs and Made in the AM by 1D are great albums and shouldn't be overlooked.

3. She's Been Gone for So Long

21 came out in 2011, and fans heard nary a peep from Adele for several years following the release. She was suffering from writer's block and was having a tough time creating 25. Yet her absence from the music scene was clearly not enough to make her fans forget about her or ignore her new album.

4. She's Been Balancing Everything With Motherhood

Adele has been balancing her career with raising a son the past three years (and having him guilt her for not hanging out with him). Having two full-time jobs is never easy... you go Adele!

5. She Went Out Of Her Comfort Zone

The song "Send My Love" is much more "pop" than anything Adele has ever written. And according to an interview with NPR, that's because she heard Taylor Swift's "I Knew You Were Trouble" and loved it. She found the producer, Max Martin, and a genius song was created. Not her usual style, but it turned out amazing.

6. She Was Planning On Quitting After 21

"For awhile I was like, maybe I shouldn’t come back. Maybe I should go out on a high. Maybe everyone likes what they’ve heard of me. "

In an interview with Carson Daly, Adele admitted that she wanted to end her career after 21. What would the world be like without new Adele albums? I shudder to think.

Among other accolades 25 has received, Rolling Stone calls it the #2 album of 2015 only to be beaten by To Pimp A Butterfly by Kendrick Lamar. Not too shabby.

In conclusion, and though I don't need to remind you, Adele is a queen among us. She might not technically be English royalty, but she will always be the ruler of soulful jams. Now, I don't mean to rush her or anything, but when is that 25 follow-up coming out? The wait is already too long.

More like this
The Beyhive Is Mad At Harry Styles After Beyoncé’s Album Of The Year Snub
By Jake Viswanath
Grammys Host Trevor Noah Made Adele's Dream Of Meeting The Rock Come True
By Brad Witter
The Jonas Brothers' New Album Has A Very Meta Name
By Alyssa Lapid
9 Photos Of Celebrity Couples & Unexpected Duos At The 2023 Grammys
By Jake Viswanath
Get Even More From Bustle — Sign Up For The Newsletter
From hair trends to relationship advice, our daily newsletter has everything you need to sound like a person who’s on TikTok, even if you aren’t.