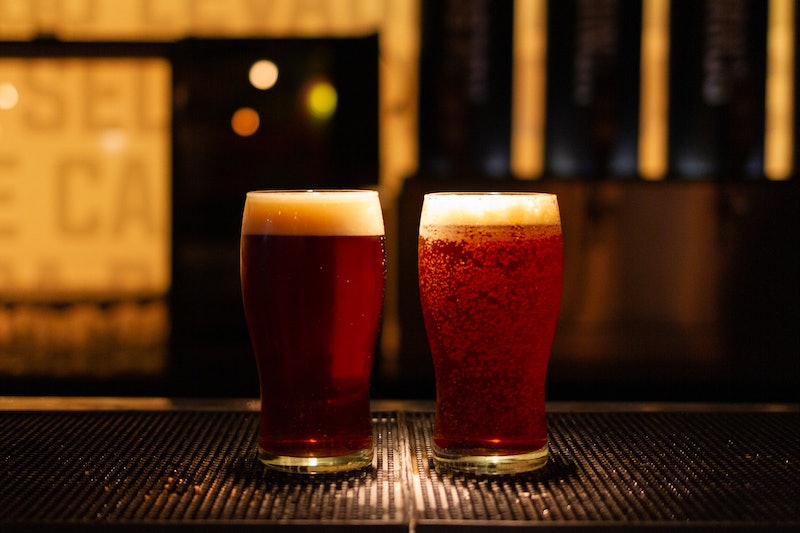 It's a story that has been popping up everywhere lately — a woman in upstate New York gets arrested for driving with a blood-alcohol level four times the legal limit; then her charges get dropped due to auto-brewery syndrome. If you're now wondering, "What is auto-brewery syndrome?," don't feel bad. I'd never heard of it either. For that matter, neither had the arrested woman's attorney before taking the case. But since anything is possible and that includes being afflicted by a mysterious medical condition that makes you drunk sans drinking, let's discuss.

In the case of the New York woman, she was entirely unaware anything was amiss. According to CNN, she met her husband for food and drinks one day in 2014. Over a six hour period, she consumed four alcoholic beverages. That's not too bad, eh? However, when she got a flat tire on the way home and a passerby noticed her struggling to change it, a cop arrived on the scene to help out. Only, seeing the state the woman was in, the officer instead asked her to take a breathalyzer — much to the woman's shock, she blew a blood alcohol level of almost 0.40. Then came another plot twist. The hospital didn't feel it was necessary to hold the woman as she wasn't exhibiting the classic symptoms of, well, being that drunk.

A subsequent battery of tests showed that the woman's blood alcohol levels over a 12-hour time period without any consumption of alcohol still measured over the legal limit. Thus, the woman was diagnosed with auto-brewery syndrome, and her case was dismissed. All of this, of course, begs the question, What in the heck is this crazy condition which turns your body into an internal brewery?! Here are a few important notes.

Here's the long and short of it: Auto-brewery syndrome occurs when an over-abundance of yeast trapped in the digestive system causes the body to convert common carbohydrates into alcohol. So when someone with auto-brewery syndrome eats something particularly starchy, a simple chemical reaction occurs which ferments the carbs, producing ethanol and — voila! — instant drunkenness. For obvious reasons, it is also known as Gut Fermentation Syndrome.

Does it affect a lot of people?

At this point, little is known or documented about auto-brewery syndrome. Who knows how many people are possibly suffering from this condition and have no idea? In 2013, when a 61-year-old man stumbled into a Texas ER complaining of dizziness, nurses suggested a breathalyzer test. While it would have been easy to assume he had just knocked by a few too many based on his blood alcohol level of 0.37, the reality was that the man hadn't had anything alcoholic to drink that day. His case has since been documented in medical journals. Then, in early 2014, a man named Matthew Hogg detailed his lifelong struggle with what he now knows to be auto-brewery syndrome. Outside of these publicized cases, though, there is little in the way of documented reports.

Again, due to lack of medical recognition of the condition, there are no hard and fast guidelines for how it affects people. However, we know from the 61-year-old Texas man's case that it can lead to dizziness. And Hogg told VICE he suffers from chronic whole-body symptoms, including fatigue, headaches, muscle pain, moodiness, unexplained aches, stress intolerance, cognitive impairment and the feeling of intoxication.

Is there treatment, or do you just have to deal?

Yes and no. In the case of the woman from upstate New York, doctors are trying to treat the condition with a combination of anti-fungal medications (to fight the proliferation of yeast in her gut) and a very strict diet which is low in carbs and free of alcohol, sugar, and yeast. So far, this seems to be the solution yielding the most success — Hogg described adopting a similar regimen which he says minimizes the effects of auto-brewery syndrome but does not cure the condition.

While the initial reaction to hearing about a medical condition which allows you to be drunk without having to actually get drunk may be something along the lines of "Score!", the fact of the matter is auto-brewery syndrome isn't a fun way to save money on your bar tab. In addition to the possibility of alcohol poisoning, those who have auto-brewery syndrome run the risk of being involved in a potentially life-threatening accident after doing little more than eating a bagel for breakfast. Not to mention, can you imagine having a hangover for life?