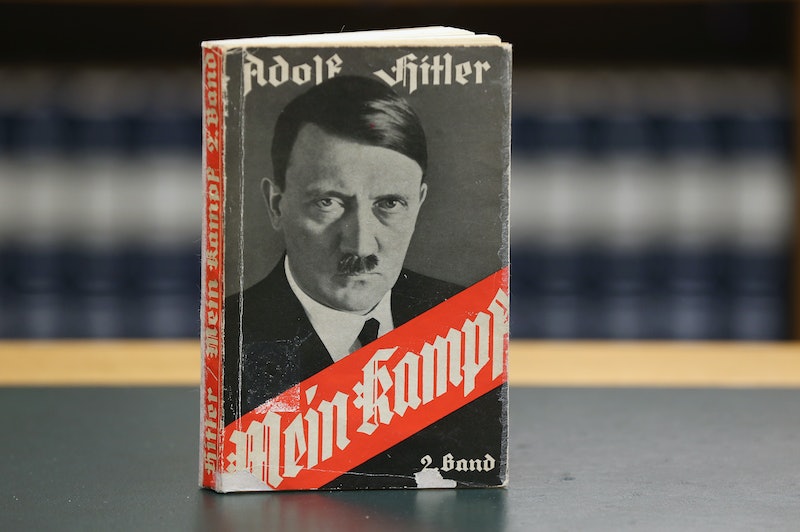 There's one famous German book that's been out of print in Germany for a lifetime, but that's about to change. For the first time since World War II, Mein Kampf will be available in Germany. But even though an annotated version will be available January 8, the decision to release it is controversial. So is it a good idea to once again sell Hitler's famous autobiography in Germany? Well, the issue is complicated, and there isn't a clear answer.

Mein Kampf, which means "my struggle" in German and which lays out the frame work of Hitler's ideology, was originally published in 1925. Following Hitler's suicide in 1945, the copyright was held by the German government, which held the rights to Hitler's entire estate after his death. And although buying and selling existing hard copies of the book was legal in Germany, the government as the copyright holder could and did effectively prevent the creation of any new copies, and so getting a German edition of Mein Kampf hasn't really been possible in a long time.

However, as of New Year's Day, 2016, 70 years have passed since the author's death, which means Mein Kampf is officially in the public domain — and as a result, anyone can distribute it. And although Germans have been debating for years whether or not the book should be allowed in the country, an annotated version, which was approved and sponsored by the government in 2012, will be appearing next month. It's meant to put the book in proper historical context and to counter any neo-Nazi copies that begin circulating, but the question remains whether such a book should be produced at all.

There are a lot of differing opinions on the issue. Many people, including many leaders in the Jewish community, think that releasing the book in any form, even an annotated one, is dangerous and could promote the sorts of widespread social ideologies that led to Hitler's rise and to the subsequent atrocities of the Third Reich.

"I am absolutely against the publication of Mein Kampf, even with annotations," Levi Salomon, spokesman for the Berlin-based Jewish Forum for Democracy and Against Anti-Semitism, told Washington Post last year. "Can you annotate the Devil? Can you annotate a person like Hitler?"

And indeed, the potential dangers of Mein Kampf should be taken seriously. Although the book is 90 years old, outside of Germany, translations are still very popular. As recently as 2014, the book made several eBook bestseller lists, which is alarming to say the least. And, of course, it remains a staple among neo-Nazi groups — meaning that a wider circulation might draw even more people to this dangerous and hateful ideology.

As terrible as it is, there are still people trying to promote the same sorts of ideals Hitler stood for, often in very explicit terms. And giving them access to a book already proven capable of swaying millions is not a turn of events anyone is overly pleased about.

On the other hand, pretending that Mein Kampf doesn't exist just isn't possible, especially with the copyright expiring. And as long as versions of the book are going to be available, an annotated copy created by scholars could be a valuable resource and further reinforce the understanding that Hitler's ideas were wrong, misleading, and reprehensible.

“We don’t let any of Hitler’s claims pass without our interpretation in our footnotes,” Christian Hartmann, one of six historians who have worked on the annotated edition since 2012, told the press. He also added that the institute is not looking to make money off the book, which has been its own thorny issue for English-language publishers over the years.

And indeed many people feel that an annotated edition could be useful not just in demonstrating clearly just how wrong Hitler was, and educating the public about the driving forces that led to the Holocaust and the rise of the Third Reich. Dan Michman, whois part of the International Institute for Holocaust Research at Yad Vashem in Jerusalem, told the Financial Times earlier this year, "In this era of rampant Holocaust denial and distortion, it is important for the public at large to possess the knowledge previously only held by researchers and historians."

Others think an annotated version could teach students to recognize how political rhetoric can distort the truth and sway audiences in dangerous ways, which is a valuable lesson. “An edition of the book with critical commentary could help inoculate younger generations against political extremism,” Josef Kraus, head of the German Teachers Association, said.

However, many feel that the book has no place in schools whatsoever. And it's hard to blame them for that view. After all, after this book and its ideology once infected an entire society, do we really want to go out of our way to introduce it to impressionable young people, even to refute it?

All in all, it's a complicated issue, one without easy answers. Though I myself am never a fan of censorship, it's also impossible not to recognize that Mein Kampf and the ideas it contains were a key part of the systematic murder of millions upon millions of innocent people. Mein Kampf can never be just an ordinary book, and for Germany, choosing how to deal with it is a unique struggle.

So is releasing the book in Germany a good idea? Well, one thing is certain: Now that the copyright has expired, we will soon find out.