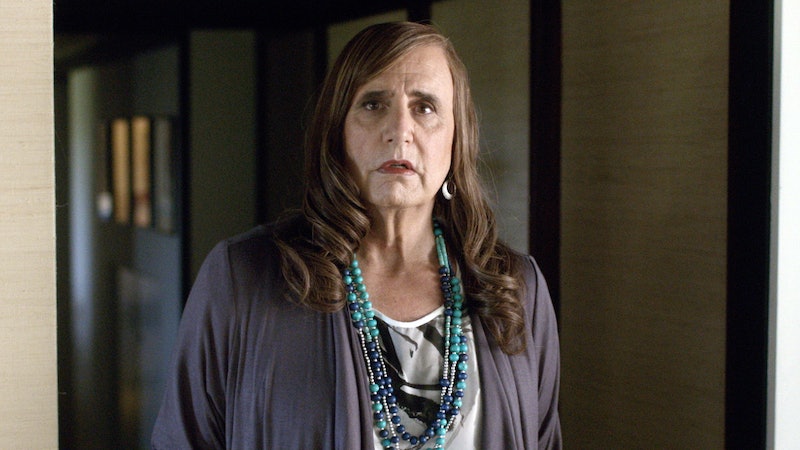 This past December, when Amazon released Transparent Season 2, it was greeted with the same chorus of praise that the first season received in 2014. Showrunner Jill Soloway has again been lauded for her writing, her courage, her "transfirmative action" hiring policy, and, oddly, even her choice in girlfriends. All of that is to say, just like with Season 1, the problematic aspects of Transparent have not been addressed in its second season. Though there have been some improvements, the show continues to suffer from many of the same issues, and actually picked up a few more along the way. Namely, Transparent continues to ignore titular parent Maura in favor of her cisgender children, present complex issues in the trans community problematically, and, worst of all, in "Man on the Land" address one of the biggest wounds the trans community has dealt with in a deeply flawed way.

Before I watched it, I wanted to like Transparent Season 2, and some things about it did give me hope. For example, trans actress Lexi Billings, whose Davina was by far my favorite character from Season 1, gets more lines in Season 2 and a life outside of being just a mentor to Maura. That life includes an ex-con boyfriend, Sal, who comes back to society and promptly begins telling Maura exactly how many ccs of silicone he recommends she have injected "in the titty area." This leads to one of the realest exchanges we’ve seen between Maura and Davina yet, as the tension between the two boils over into argument: can Davina do better than the "trans-amorous" Sal, or does she have to settle for life with a man who may well only want her because of her gender identity?

It's good to see an issue like this being dealt with on Transparent, but disappointing that it's presented in such a lopsided way. Davina’s verbal smackdown makes it seem as if Maura’s discomfort about Sal is just another example of the latter’s cluelessness. In fact, the debate about whether or not the "trans-amorous" (who some of us in the trans community prefer to call chasers) are a good thing is a lot more complicated. Unfortunately, this won't be the only time Transparent Season 2 takes a serious issue facing trans people and refracts it through the distorting prism of Maura’s (frankly incredible) naivety.

But at least Maura was actually involved in that scene, which is more than can be said for much of Transparent, which has a tendency to make her seem like an afterthought or worse, an obstacle in the lives of her children. While i recognize that this is an ensemble show about the Pfefferman family, I would appreciate more focus on the character who needs the most visibility. This dynamic is established in the very first scene of Season 2, when Maura delays a family wedding photoshoot with incessant questions about which angle she’ll appear most feminine from, then walks out after being misgendered. Rather than continue to follow her after this and let the audience see more of Maura's inner state, the bulk of the episode’s action then shifts to Pfefferman daughter Sarah and her refusal to marry Tammy, which brings up yet another issue with the series: its portrayal of lesbians.

Tammy, who broke up Sarah's marriage in Season 1, becomes a drunken joke after they don't marry, given lines like "I have the soul of a warrior — AND YOU HAVE CRUSHED IT!" as she crashes pool parties given by the Pfeffermans or tries desperately to make out with Sarah at a fundraising gala for her children’s high school. Given that Tammy seemed by far the more confident partner in that relationship last season, it’s hard not to regard this as a deliberate sacrifice of characterization for cheap laughs.

However, none of this compares to the single biggest issue with Transparent Season 2: the episode "Man on the Land," which shows Maura, Sarah, and Ali at a trans-exclusionary women's music festival (which uses the titular phrase to signify when a man is present) and exemplifies everything wrong with the series.

For a show that is ostensibly about her, Transparent rarely puts Maura at the center and allows her very little agency. Despite the fact she’s an academic, she is portrayed as ridiculously naive about almost every aspect of transitioning, and is incapable of standing up to transmisogyny in any way. When I first began transitioning, two of the first things I learned about were chasers and trans-exclusionary radical feminists (or TERFs). I discovered pretty early on that some people would fetishize me, and others would want to kill me purely because of what I had between my legs. But Maura only finds out about chasers after going out with Davina and discussing her "titty area" with Sal, and she goes to a women-only event without doing any research to find out what they mean by women-only.

This isn’t just unrealistic, it borders on being flat-out transmisogynistic. We see Ali doing tons of research into a variety of things as she prepares an application to study with a professor, but all Maura does is flounce around, worrying about her appearance. The only aspect of transition she’s presented as having done even the most cursory research on is medical: the type of testosterone-blocker she’s to be put on. Despite being a political science professor, despite being formerly on the editorial board of a journal, and despite just being a trans woman, Maura has no understanding whatsoever of the contested politics of transition and has to be educated on them at every turn by more knowledgeable cis women like Leslie and Abi.

Nor can Maura effectively argue back against the exclusion she faces, as shown in "Man on the Land." Ali and Leslie confront two TERFs during the most polite (and therefore least realistic) TERF vs. trans showdown I’ve ever seen, while Maura, once again, flounces off to emote by her tent before making everyone else’s lives easier by voluntarily evicting herself from the festival, actually shouting "man on the land" as she does so.

This episode is a checklist of Transparent's flaws: the supposedly pro-trans show's main character is hysterically emotional, incapable of reasoned debate, politically naive to an insultingly unbelievable degree, and who runs away whenever doing so makes it more convenient for the cis people around her. Maura can’t even leave the festival without a cis woman’s help, and has to be rescued by Vicki, a breast cancer survivor who drives Maura away from the campground and sleeps with her in a motel room in the season finale.

This episode is a checklist of Transparent's flaws: the supposedly pro-trans show's main character is hysterically emotional, incapable of reasoned debate, politically naive to an insultingly unbelievable degree, and who runs away whenever doing so makes it more convenient for the cis people around her.

I really wanted to like Transparent Season 2, simply because it is exhausting to have to be one of the few voices out here pointing out the ways it screws up. It’s hard to watch so much praise being thrown at the series because it's easier to cheer on Transparent than to ask why studios aren’t making shows about trans lives written by and starring trans people. And it would be easier if I liked Transparent — so much easier. Easier to just go along with that chorus of approval, than to stand up for the fact that Transparent can be patronizing, insulting, and inaccurate.

It would be easier. But it would be settling, and trans people have settled for crumbs from the cis table for far too long. When Maura dares to suggest something similar to Davina in their argument about Sal, she’s presented, as usual, as a dreamer who just doesn’t get it, but this time, she’s right. Davina can do better than her chaser boyfriend, and trans people can do a hell of a lot better than Transparent.