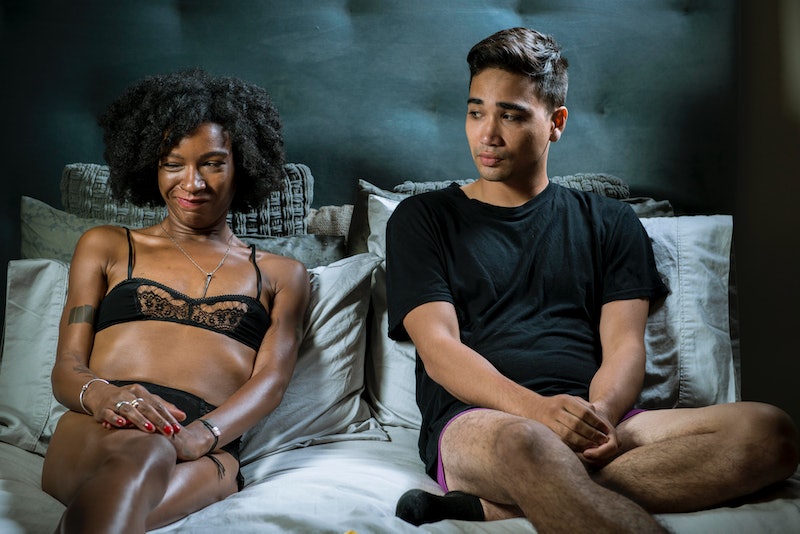 We all have that one friend, partner or ex who just can't handle fighting. If the possibility of a disagreement rears its head, they're out the door, manically changing the subject, or shutting down completely so that peace, in its own way, reigns — or, more realistically, things go quiet and issues remain completely unresolved. If this is a chronic occurrence, your friend — or you — may actually be conflict-avoidant, a psychological designation for people who strive to get away from fights of any kind at all costs.

The thing about conflict avoidance is that, in small doses, it's actually a perfectly reasonable reaction. Fights aren't fun; they stress the body out severely, for one thing. If you're going around seeking people to punch, you aren't operating healthily (obviously). But in many contexts, from the workplace to relationships, being able to air legitimate grievances in a way that is heard and respected is a valued skill, and a necessary part of a good, healthy environment. If you don't get assertive, how can you make it clear to your girlfriend that you're really not OK with the fact that she keeps playing Xbox all night, or tell your workmate they made a mistake with a project? Conflict-avoidant people would rather just shoulder the bad behavior of others than deal with it, and that doesn't lead to happiness or satisfaction for anybody.

Here are seven signs you might be chronically conflict-avoidant, and why that might actually be a serious problem.

1. You Fear Disappointing Or Displeasing Anybody

Conflict avoidance is classic people-pleasing behavior. If people-pleasing doesn't sound that bad to you (why would you not want to make other people happy?), we're talking about the extreme here: where a fear of provoking displeasure or negative emotions in others keeps you from expressing yourself or trying to fix issues. Conflict avoidance often comes from a deep fear of pissing anybody off or making them "dislike" you in any way; in the conflict-avoidant person's mind, enduring a bad situation is better than fighting about it and possibly incurring somebody's displeasure.

2. You Pull Conversational Manoeuvres To Get Away From Fights

Serial conflict-avoiders will have a series of unconscious manoeuvres to get out of fight situations. Maybe you throw out a joke; maybe you get all passive-aggressive; maybe you leave the room, or deliberately change the subject. But if things start to look like conflict, your immediate reaction is to either get out of the situation or somehow change it so that it's more peaceful, rather than seeing the fight through.

Conflict-avoiding people are often gunnysackers. It's a term from psychology, referring to the practice of silently accumulating grievances, annoyances, and problems as they build up, and then letting them all go in a rush as the "sack" bursts, often completely flooding their target. Gunnysacking is intimately related to conflict avoidance, because it's what happens when you don't resolve things as you go along, and just hold onto them instead. It can also reinforce conflict-avoidant behavior, because after the flood of misery dumps, you may feel absolutely wretched and irrational, and resolve to "be more peaceful" in the future. Cue new gunnysack cycle.

4. You Experienced Bad Conflicts In Your Childhood

A bit of fighting isn't actually a bad thing. You just have to learn to fight well, and fight respectfully. But conflict-avoidant people tend to have learned, early in their lives, that conflict is a frightening, negative experience to be avoided at all costs, rather than something that can actually resolve problems. Violent fights, irrational parents, conflicts that escalate rapidly into seriously damaging slanging matches: if you've seen a fight go really badly wrong, you'll be inclined to pull away from all possibility of that happening in the future, even if your coworkers are unlikely to pitch a horrific fit if you disagree about a Powerpoint.

Here's the thing: in adulthood, some things rarely resolve properly without a good fight, or at least somebody standing up for themselves and asserting their opinion. If you're conflict avoidant, instead of telling your boss they've got your pay wrong and need to fix it, or a boyfriend that their birthday card for your mom was offensive, you'll suffer in silence. Key word "suffer," because the issue at hand won't change if you won't engage in discussion about it, and the same thing will likely happen again. And that's how resentment builds.

6. You've Suffered Injustice And Unfairness Just To Avoid A Fight

If you can think of more than one example where avoiding a fight led to a significant disadvantage on your part, you're probably a prime candidate for conflict-avoiding status. Sometimes avoiding conflict is a good idea; if somebody is being irrational, prone to violence, or just needs to be calmed down rather than met with assertive responses, it's a good and diplomatic idea. But you have rights, and if you've let them slip rather than go for a direct confrontation, you're avoiding conflict and costing yourself things in the process. And no, complaining to other people doesn't count as helping a conflict resolve itself.

7. You Have A Fear Of Expressing Yourself

This is tied to #4. Fights are, ultimately, about expressing our own position in ways that may convince the other person that they're wrong. If, however, you've come from an environment where your own views were met with dismissiveness, snorts of derision, serious smack downs, constant criticism, or any other kind of systemic dismantling, you're not going to feel comfortable asserting yourself.

This is also, frankly, a feminist issue. Women, as Jennifer Lawrence pointed out so eloquently in her essay for Lenny Letter about salary negotiations, are supposed to be "nice". We're not supposed to play hardball, step up to criticism, come out guns blazing, or stand our ground. We're culturally expected to couch any self-expression within apology, humility, and gentleness. Being assertive is not part of our set of cultural weapons, but it damn well should be. If you avoid conflict because, on some level, you believe it's not ladylike to get involved in deep, dirty fights, you may be doing yourself a serious disservice.

Getting out of conflict-avoidant patterns is tricky, but there are a lot of psychological guides to getting what you need out of a conflict, from pre-planning your sentences in your head to figuring out how you'd like things to resolve ahead of time. It's all right. A simple verbal confrontation over sandwiches with a barista won't kill you. I promise.