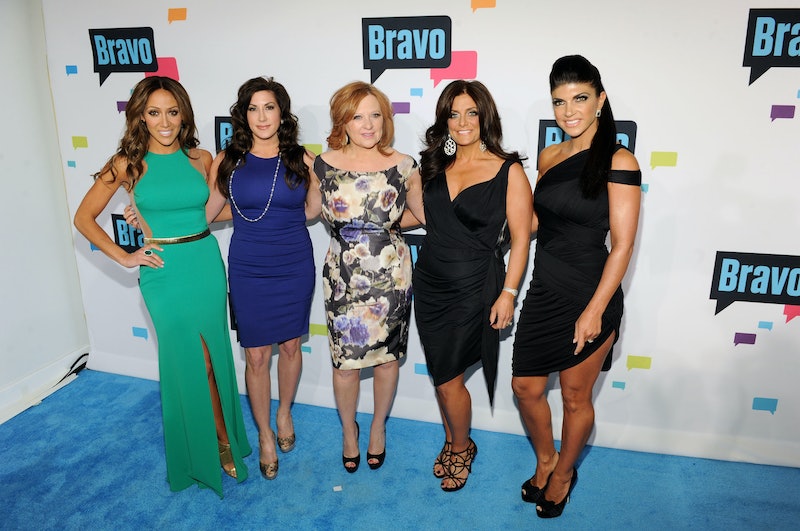 The cast of The Real Housewives of New Jersey haven't been on Bravo as much as usual for the past two years. After the sixth season of the show, it went on a long hiatus while Teresa Giudice served her prison sentence after pleading guilty to financial fraud. But even though Teresa was out of touch for basically all of 2015, plenty of things have happened to the rest of the Real Housewives of New Jersey since Season 6 ended. And that means there should be plenty for the reality series to cover when it returns.

First of all, there's still a split between some of the original cast members. Caroline Manzo still has her own show, Manzo'd With Children , so she likely wouldn't be involved in another Housewives season. And Jacqueline Laurita, formerly a Housewife, has also appeared on Manzo'd, so she might not be back either. While Dina Manzo might have returned to RHONJ for Season 6, she recently bought a house in California and is spending some of her time there, which may limit her availability to film in New Jersey. So all three of those former members of the cast, while they may have had eventful years, may not be included in the upcoming season of the show. Still, these six events should be more than enough to make Season 7 RHONJ's best yet.

While no one else's Season 7 status has been confirmed, Amber Marchese told People that she will not return to RHONJ . Of course, the other Housewives will likely have a lot to say about her absence — and maybe her support of Donald Trump.

2. Nicole Napolitano May Have Gone Through A Breakup

One half of Season 6's new duo, Nicole's relationship with Bobby — excuse me, Baaawwwbby — took over most of her storyline. However, if she returns to RHONJ, that may have to change, as she hasn't posted a photo of Bobby Ciasulli in a year. Yet at the same time, Bobby's entire Twitter account seems devoted to an obsession with RHONJ. Maybe they're still together and Nicole is just trying to keep it on the DL. Or they could've broken up, but Bobby will still be a presence on the show.

Despite all of the conflict between the twins and Teresa G., Nicole was spotted with Teresa, Rino, and Joe Giudice, and according to All About the Tea, there may have been Bravo cameras filming the dinner.

Despite the many fights we've seen over the course of RHONJ, Teresa's sister-in-law has been standing by her extended family. Melissa posted a New Year's Eve photo with Teresa, and according to E!, the two families spent Christmas 2015 together too. Hopefully we'll get to see some of those family events on another season of RHONJ.

5. Kathy Wakile Made Some New Friends

Kathy was only a recurring Housewife on Season 6, but why not check in with her anyway? She was spotted out with potential new RHONJ Siggy Flicker. There hasn't been any confirmation from Bravo about the Season 7 cast, but NJ.com speculates that Siggy, Christina Flores, and Robyn Levy are under consideration to become new Housewives.

6. Teresa Giudice Has A New Venture

While Teresa was serving her prison sentence, her family was featured in the short RHONJ special, Teresa Checks In. And according to that special, Teresa already has a book deal about her prison experiences in the works, which People reported will be called Turning The Tables . Orange Is the New Black Part 2, anyone?

Teresa's life was by far the most eventful in 2015, but would you expect anything less? She'll always be the star of the show.