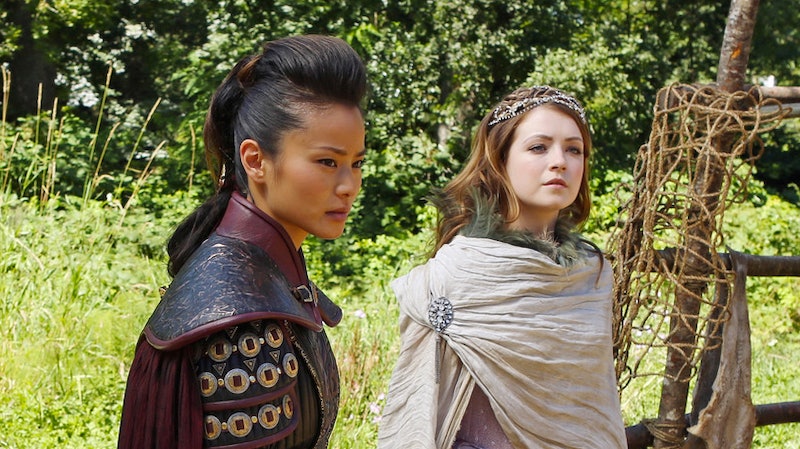 A few months back the fairytale world was shaken up, some would say — gasp! — modernized, when it became clear in more than just the subtext that Once Upon A Time's Mulan was in love with sleep-plagued princess Aurora. It was a pretty big moment for LGBT representation in Disney, and in a recent press conference for her new show Believe, Mulan portrayer Jamie Chung talked about Mulan/Aurora and a bit about what it means to audiences that the writers took that step:

It was like an on-going inside joke between Sarah Bolger [who plays Aurora] and I. ‘I secretly, like, really care about you.’… The audience…there’s this conspiracy online, ‘Mulan loves Aurora!’ And I’m really glad the writers listened because I really think they planned that from the beginning. They’re all about twists and, like, why not, you know? It felt so natural to begin with.

It's incredibly common for fan communities to rally around same-sex pairings that have little to no chance of becoming romantic within the canonical confines of a show — and society can dismiss these "slash" pairings as the product of strange fandom all it wants, but a good portion of it springs from the existence of a desire within audiences to see something other than the rampant hetero-nomativity that takes up most of television's airtime.

This is, in a big way, why it's so cool that the Once Upon A Time writers' relative lack of fear in airing a realization of that same-sex love — between a well-known Disney princess and a well-known Disney heroine, no less — is pretty groundbreaking.

It only follows, then, that Chung also desires a further exploration of her character's love of Aurora. The last we saw them, Mulan had been about to confess her love, only to be interrupted by Aurora's news that she was pregnant. She walked away heartbroken, and that was that. Chung, however, would like to bring the sotry back to the forefront depite her new role on a new show:

I think it would be really disappointing to leave the audience with this giant question mark. I would go back in a heartbeat. I am committed to [Believe], but I don’t think that door is shut so I’m hoping there is something we can do to answer those questions… I would love more character development…something to sink my teeth into with that character.

I would like to take this time to beg the universe/the Believe and Once Upon A Time producers to make this happen. Pretty please?