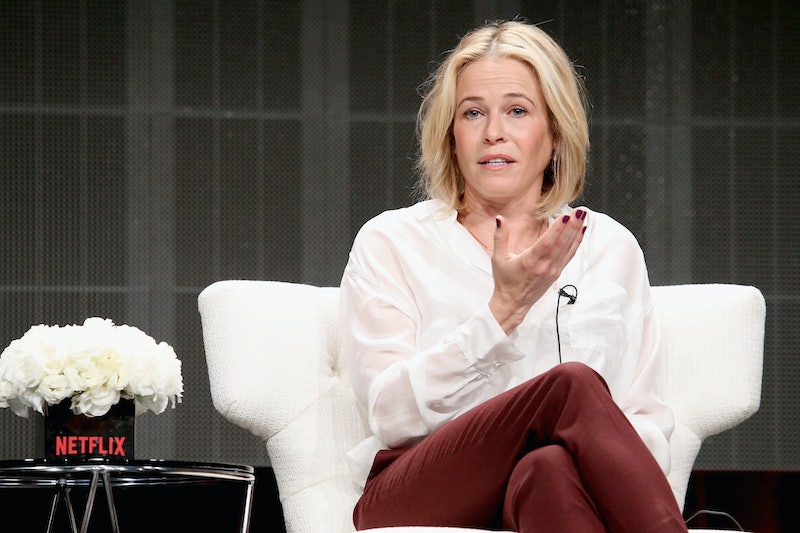 When Chelsea Lately ended in 2014 and it's host, Chelsea Handler, was not given a late-night spot soon after, I lost much of my hope in the world. However, it looks like things are beginning to look up, because the first segment of Handler's original four-part Netflix series, Chelsea Does , just received a new teaser — and it looks amazing. Per the teaser, it looks like the show will feature Handler asking the questions that we all have wondering, but are too afraid to ask, about topics that interest her — everything from marriage to Silicon Valley. All four segments will premiere on Jan. 23. The segment featured in the trailer, Chelsea Does... Silicon Valley, focuses on not only Silicon Valley, but also Handler's complete inability to grasp any aspect of technology.

In the initial trailer for the entire series, Chelsea can be seen chatting it up with celebrities such as Willie Nelson, Reverend Al Sharpton, and Khloé Kardashian. She can also be found rocking a pink wedding dress and observing the religious at the Western Wall in Israel. What else could this show possibly have in store?

In this teaser, we learn a little bit about what Handler has in mind for her series. Let's take a look at what we know now:

1. She's Researching A Lot About Technology

While hanging out with these school children and tapping away on a computer, Handler looks very confused. She has to do this in-depth research because she, admittedly, knows nothing about technology.

2. Khloé Kardashian and Leah Remini Are Bringing the Selfie Game

While Handler discusses her lack of understanding about technology, Leah and Khloé are around to lend a helping ear. And take the occasional selfie.

3. This Gadget Is Involved

What is this, the future? What the heck is that thing?

Handler is ready for answers from Silicon Valley. As she says in the promo: "I want to talk to them about their algorithm. I want to find out what an algorithm is."

5. Handler And A Robot Seem To Have Some Drama

This robot woman is not down with being referred to with the term "robot." And she has some serious sass! Watch out Handler, haven't you ever seen a sci-fi movie?

6. The Machines Are Taking Over

With this clip of people staring at their phones instead of actually communicating, I can only assume a discussion about this sort of behavior will go down.

7. Khloé Kardashian Has Some Wise Words

Which Handler immediately responded to with, "I wonder who's family that came from." Looks like Handler learned from some sass from the aforementioned robot.

This all seems so funny. I'll see you all on Jan. 23, when we can marathon all four episodes all together as one people. Special thanks to technology, the great unifier, and the gang at Silicon Valley for making it so.