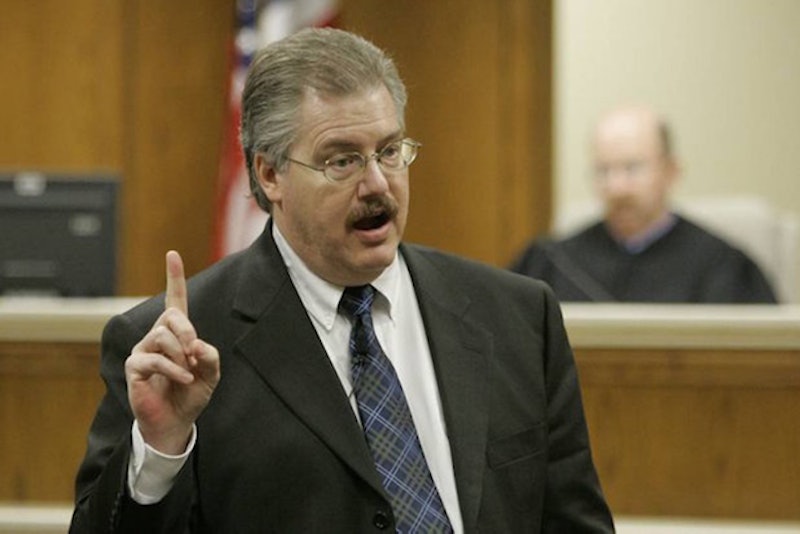 The Netflix documentary series Making a Murderer has been making waves across social media for its comprehensive look at the trial of Steven Avery, a Wisconsin man who was convicted of photographer Teresa Halbach's murder in 2007, in circumstances that have captivated viewers and critics alike. Co-creators Laura Ricciardi and Moira Demos were inspired to turn the case into a documentary after the story — and Avery's previous wrongful conviction in a separate case — had made front-page news. The duo worked on the series for a decade, though they did so without the input of a key attorney. As additional information continues to come to light, many are wondering: Just who is Ken Kratz, the state's special prosecutor in the Avery case?

Kratz was assigned to State of Wisconsin v. Steven Avery while serving as the district attorney of neighboring Calumet County. Calumet County was involved in the case due to Avery's previous wrongful conviction in Manitowoc County in 1985. Avery was released after serving 18 years in prison for rape before his eventual exoneration thanks to DNA evidence. He subsequently sued the county, its sheriff, and district attorney. Feeling that there would be a conflict of interest, given the $36 million lawsuit that Avery had filed, the state appointed Kratz as the special prosecutor. Kratz served as Calumet County DA from 1992 to 2010, when he resigned following a scandal of his own.

Kratz plead no contest to six instances of misconduct following the unearthing of racy texts he had reportedly sent to a domestic abuse victim whose boyfriend he was prosecuting in 2010. The disgraced district attorney had his license to practice in the state of Wisconsin suspended for four months, and he was forced to pay a $23,904 fine (the sum had been calculated from investigative costs). He was long considered to be a victims' rights advocate, and had even served as the chairman of Wisconsin's Crime Victims' Rights Board. He was forced to step down from that position in the wake of the scandal. Kratz acknowledged sending the messages, and later stated that a prescription drug addiction, as well as sex addiction, was to blame. He has reportedly been sober for five years.

Kratz relocated nearly 300 miles away to Douglas County, where he opened Kratz Law Firm in 2011. Kratz primarily practices criminal, divorce, and personal injury law. Although his website includes copious testimonials attesting to his work as a lawyer, his Yelp page is anything but kind.

Following the release of Making a Murderer, viewers took to the Kratz Law Firm Yelp page to express their disdain. The website is currently cleaning up erroneous reviews in response to the over 200 currently posted. Kratz's Wikipedia page had also reportedly contained biased information about the former district attorney, but it has since been edited. His Google reviews have received a similar treatment from disgruntled viewers.

Kratz is clearly still proud of his involvement in the Avery case, despite the public ire against him. He advertises that he "successfully tried one of the largest and most complex homicide cases in Wisconsin history" on his law firm's website. He has also recently began speaking out about Making a Murderer 's representation of the case, and has been highly critical of Ricciardi and Demos' motives in creating the series. Kratz had this to say to Milwaukee Fox affiliate Fox6 about fans' response to the show, as well as his own criticisms:

Anytime you edit 18 months worth of information and only include the statements or pieces that support your particular conclusion, that conclusion should be reached ... [I've received] suggestions that I shouldn’t even be walking around was offered, the good cheer that I happen to develop stomach cancer for Christmas and really lots of really troubling pieces of correspondence.

The attorney has even claimed that Ricciardi and Demos were initially pitching the series as "an advocacy piece created by and for the Steven Avery defense." The duo have since responded that they feel they included the state's strongest, most compelling evidence when whittling down hundreds of hours of footage while creating Making a Murderer.

In defending his claims, Kratz has sent the likes of The New York Times and The Wrap detailed information regarding important evidence that was reportedly left out of the series. Kratz has stated that Avery reportedly drew a diagram of a "torture chamber" while wrongfully serving time in prison, insinuating that he would commit crimes with the device, and that he had shown that drawing to a fellow inmate. Kratz also claimed that Avery used the *67 feature on his phone to place anonymous calls to Halbach prior to her murder. He wrote in an email to The Wrap:

Avery uses the *67 feature so Teresa [Halbach] doesn’t know it him … both placed before she arrives. Then one last call at 4:35 pm, without the *67 feature. Avery first believes he can simply say she never showed up (his original defense), so tries to establish the alibi call after she’s already been there, hence the 4:35 call. She will never answer of course, so he doesn’t need the *67 feature for that last call.

Making a Murderer appears to have raised more questions than answers, and has placed Kratz in the precarious position of defending his role as special prosecutor while he's reportedly unable to access evidence available to him when he served as district attorney. Netflix has yet to announce whether there will be another season of Making a Murderer . Perhaps Kratz could provide additional perspective if filming continues. In the meantime, the Kratz Law Firm appears to still be conducting business as usual, and the attorney has not publicly stated whether the show has affected his practice negatively.

More like this
What Is 'Pretty Wild' Star Tess Taylor Up To Now?
By Morgan Leigh Davies
Lori Vallow’s Son Was Arrested For Sexual Assault Days Before 'Sins Of Our Mother' Premiered
By Brad Witter
Where Is The Bling Ring’s Rachel Lee Now?
By Arya Roshanian
Lori Vallow Faces The Death Penalty For Allegedly Murdering 2 Of Her Children
By Brad Witter
Get Even More From Bustle — Sign Up For The Newsletter