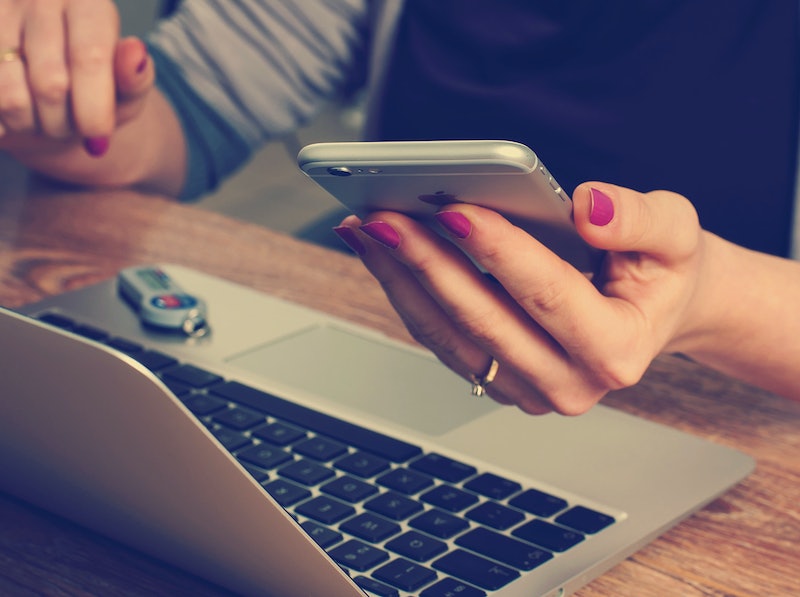 There are so many positive things about social media — unfortunately, there are a lot of negative things too. That's exactly why these social media new year's resolutions are necessary. You might think that making goals for the new year that center around sites and/or apps like Facebook, Instagram, and Twitter is vapid and silly, but it's 2016 — social media is huge, and is a part of most everyone's lives at this point.

These social media resolutions aren't about getting more followers or making your life seem awesome (because it already is — you don't need Instagram to tell you that). They're about how to act when you're online sharing things with your circle of friends and followers. At the end of the day, you can of course do whatever you want on your own social pages. But goals like these will help you ditch a few of the bad habits we all have from time to time.

I love social media, and I don't like when people complain about it like it's all bad — I think it has become an integral and amazing part of our society. But, I also don't like when people use the fact that they're hiding behind a computer screen to do things they would never attempt to do in real life. That's the stuff that needs to stop. Want to make some goals for 2016 you'll actually keep? Here are 11 social media new year's resolutions to consider.

It's just not nice. Passive aggressively writing a tweet, status, caption, or blog post about someone you know is reading your stuff is immature and silly. Let's make 2016 the year we grow out of that, shall we?

Look, you can put whatever you want online. But remember, once you type something online, it will never really be erased. People screenshot, or they just remember. Personal information like your intense emotions about something private doesn't always need to be shared. The same goes for photos, too. There's no reason to post a pic of your bloody injury, or something explicit.

3. Give thought to what you are posting.

Before you post a photo of yourself getting wasted or doing something ridiculous, ask yourself: would you be OK with your boss seeing it? If the answer is no, don't post it. I don't care if you aren't friends with anyone from work, or if you think your profile is private. I once applied to a job, and randomly got a message from a girl I barely knew in high school. She told me she knew the woman hiring for the position I applied for, and that she had looked me up and saw photos of me drunk in a bar... and had decided not to hire me because of that. Ouch.

4. No more stalking your ex.

Let's make 2016 the year we all stop cyber-stalking. I don't care if it's your ex, your best friend's new friend, a person who liked your crush's status, or the person your high school sweetheart is dating. It's not healthy, and it rarely makes you feel good about yourself.

People can be really mean online. Don't respond to rude comments with another rude comment unless you feel it's absolutely necessary. Try to ignore the ridiculous things other people have to say, because honestly, an argument about it usually isn't worth it.

I follow a lot of websites on Facebook, and I see the most awful comments users leave on article links. People have no problem saying things like, "You suck at writing" or "This girl is so ugly, I wouldn't go near her with a 10 foot pole" or "You're disgusting and deserve to die." Before you leave a rude, unnecessarily mean comment on a post, think to yourself: would you say this to someone's face? Would you like it if someone said this to you? If the answer to both is no, don't say it.

One super easy way to make someone smile? Like their photo or status. Or maybe go a step further, and leave a comment with a compliment. It's so easy, and it's so nice. Do more good things like this in the new year.

No one is forcing you to stay on social media sites — not even the people who wonder aloud how anyone can be alive in 2016 without a Facebook account. If you don't like a site or app, get rid of it. Don't keep doing something that only annoys you.

9. Try to take small breaks from social media at least once a week.

I'm a big supporter of social media, but even I can say that it's good to take small breaks when you can. It's easy to get too obsessed. There are some days when I literally can't stop scrolling through Instagram, and I need to put my phone away so I can do other things. Try to give yourself a little time each week where you don't check any social media at all.

10. Don't worry about what other people think.

I am friends with almost 800 people on Facebook, but I feel like I don't know half of them. Every day I scroll through my newsfeed, and see at least one person I don't even remember adding. The people I do know? Half of them I don't really like. Why am I still friends with them? I don't know. Let's delete the people we don't like this year, and save ourselves the headache.

More like this
8 TikTok Pasta Recipes To Try Out At Home
By Emma Garza
How To Use The Crying Filter On Snapchat, TikTok, Instagram & More
By Emma Carey
The True Meaning Behind Each Hand Emoji
By Bustle Editors and Emma Carey
TikTok’s “5-9 Routine” Trend Is Here To Boost Your Productivity
By Courtney Young
Get Even More From Bustle — Sign Up For The Newsletter