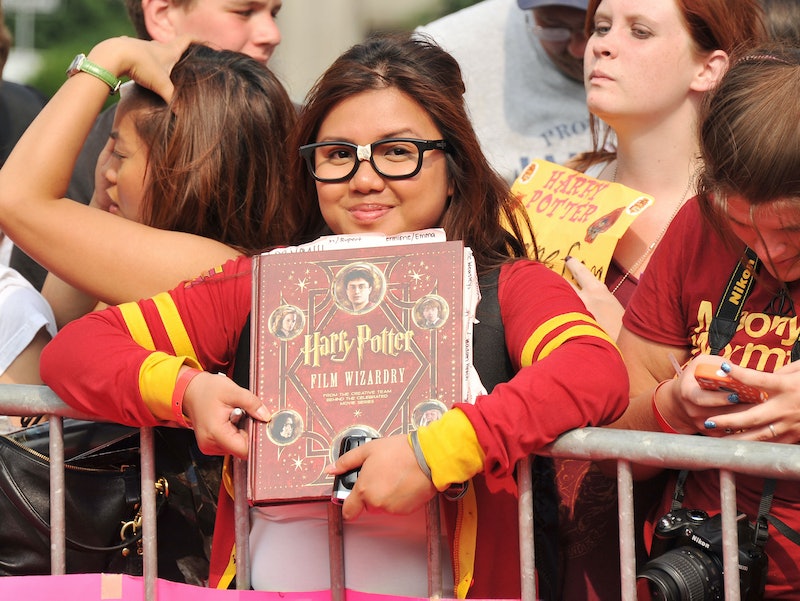 People — and by people, I mean my equally book nerdy friends — always ask: which series is better, Harry Potter or The Hunger Games? It's nearly impossible to choose, and after learning other people's preferences, I have noticed some pretty big differences between Hunger Games fans, aka Tributes, and Harry Potter fans, aka Potterheads. Both groups are passionate, adventure-seeking bibliophiles, but there are some major distinctions between the two.

I was 8 when Harry Potter and the Sorcerer's Stone was published in the U.S., and by the time Harry Potter and the Deathly Hallows: Part 2 was released, I was 21 and pregamed the movie going experience with a legal beer. From the first page to the end credits, grade school to college, I've been reading and watching Harry's adventures for more than 13 years, and am a proud Potterhead. But when Suzanne Collins's The Hunger Games hit shelves in 2008, I was "too old" to be reading young adult novels. With so much buzz around the book, though, how could I not? Needless to say, it became one of my favorite YA series, and I devoured each book and movie as vigorously as I had Harry Potter. What is it that makes these YA series so damn addictive anyway?

Both great adventure series by talented authors, the Hunger Games and Harry Potter books have a lot in common, but the most obvious is their impassioned, devoted fans. While each series has enormous followings, here are five major differences between a Harry Potter fan and a Hunger Games fan — as told by someone mostly on the fence.

1. Potterheads Wish They Could Live in the Wizarding World...

Every kid finished the first Harry Potter book and had the same thought: When does my letter come? If you're a Harry Potter fan, you dream of walking the halls of Hogwarts or shopping in Diagon Alley — so much so that you probably have visited theme parks and museums that recreate the setting. You just want to be a wizard, is that so hard to ask?!

... But Hunger Games Fans Aren't in a Rush to Go to the Games

Let's face it, Panem isn't anyone's dream vacation. Ravished by war, poverty, and oppression, it's the place of nightmares. Sure, there are plenty of different districts to explore, but no one is hoping to settle down in District 4, find a handsome fisherman boyfriend, and then get called to the Games, no matter how nice a beach house sounds. Hunger Games fans might like to read the books and watch the movies, but they don't want to be in them.

... but Hunger Games Fans Know Life Is Up To You

If you love the Hunger Games books, then you know there's no spell that can save you, no spirit that will guide you, and no magic that can protect you. You're on your own, and unless you can learn to shoot an arrow, throw knives, or camouflage really, really well, then you're totally screwed. But there is pride is learning how to take care of yourself, and fight for your own place in the world.

3. When It Comes to Harry Potter, Fans Know Love Conquers All...

Love is what protects us, what nourished us, and what lasts long after death. Whether it's between parents, friends, or soulmates, the power of love is the strongest power of all, and Harry Potter fans know that.

... But Hunger Games Fans Know How to Break Hearts

"Happiness can be found, even in the darkest of times, if one only remembers to turn on the light." These are words, courteous of Dumbledore, that all Harry Potter fans have come to live by, because HP-lovers truly are an optimistic bunch. They know that, even when your chips are down, there's always hope if you believe — or can get the Elder Wand, you know, whatever.

... But Hunger Games Fans Know Optimism Can Be Decieving

If you're a Hunger Games fan, you know that even when the glass is completely full, it still might be poisoned. Even at their best — especially at their best — things aren't always what they seem. They're usually much, much worse.

Like I said, I was a Harry Potter fan for 13 while the books and movies were released — 13 years! I had to wait months and months in between books as they were being published, and years for the movies. In fact, I'm still waiting for a Harry Potter movie — Fantastic Beasts and Where to Find Them — but that's alright, because I'v been trained for this.

Three books in two years, and a movie just two years after that? From start to finish, Hunger Games fans only had to wait seven years for all the books and movies to be released. If only J. K. Rowling moved that quickly...

More like this
16 Novels That Paint A Realistic Portrait Of Abortion
By K.W. Colyard
9 Must-Read New Books Out This Week
By K.W. Colyard
'Bridgerton' Star Nicola Coughlan Confirms Season 3 Will Focus On Colin & Penelope
By Grace Wehniainen and Alyssa Lapid
Candice Carty-Williams’ 'People Person' Tackles Daddy Issues With Warmth
By Sam Rogers
Get Even More From Bustle — Sign Up For The Newsletter