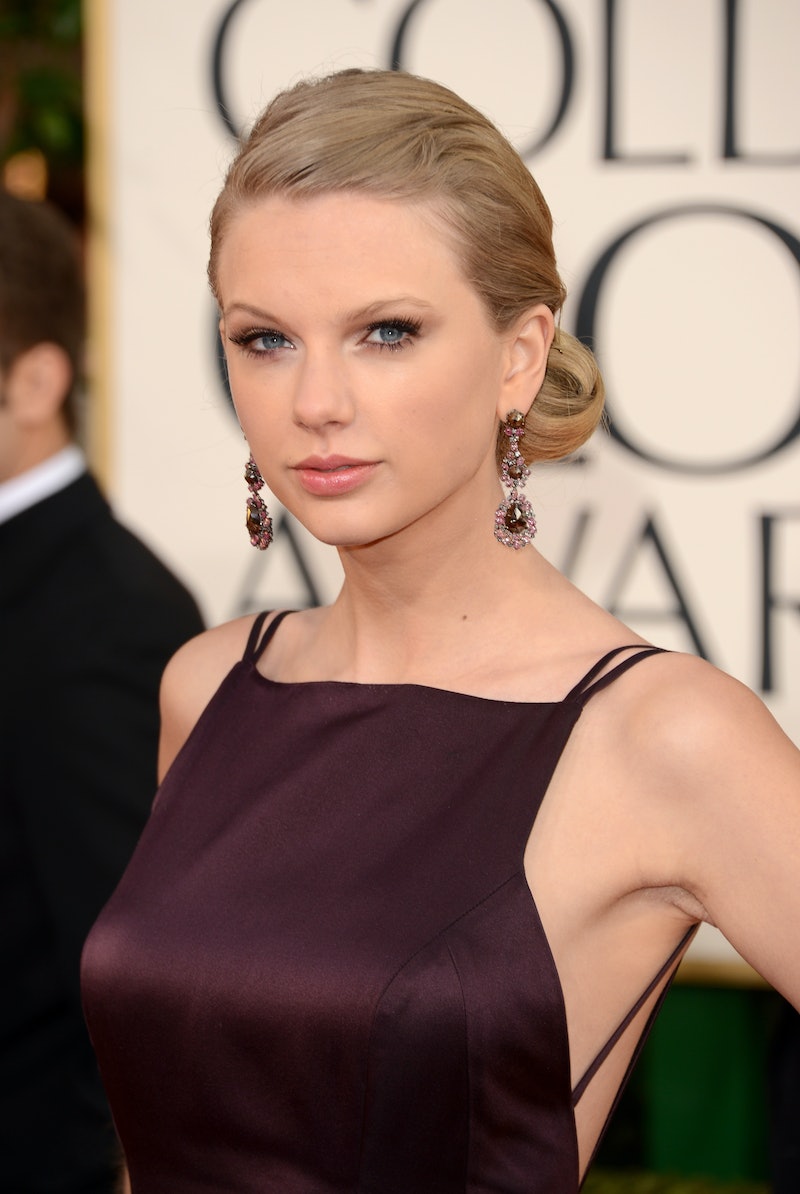 She's worn so many fierce outfits lately, that it seems like Taylor Swift's new style has been around a lot longer than it actually has, but in case you forgot, she's actually gone through quite a few fashion stages. Given that the Golden Globes are on Sunday, it might be fun to revisit Swift's first Golden Globe Awards dress, right? Right. If she walks the red carpet this weekend, one thing is for sure — she'll be wearing something totally different than she did back in 2013.

The "Out of The Woods" singer attended her first Golden Globe Awards in 2013 when she was nominated for Best Original Song for The Hunger Games (fresh off her breakup with Harry Styles — whoa, has it really been that long?), but even though she lost the award to Adele, she definitely won in the style department.

By 2013, T.Swift had left behind her cowgirl boots, bouncing curls, and boho dresses, and was in her more ladylike, retro phase. You know the one — red lipstick, high waisted shorts, bangs, and soft wavy hair. It was after country Taylor, but before crop top Taylor, and she definitely brought a timeless elegance to the Globes red carpet.

Swift's Donna Karan Atelier taffeta gown was simple and understated, and played to her more polished style. But don't be fooled by the minimalism, because check the back:

Mic drop. It might not be a crop top or an edgy, sparkly mini dress, but Swift still managed to show off some skin.

Her dress was a stunning shade of purple, and it matched her Lorraine Schwartz jewelry perfectly.

Though she looked, as per usual, gorgeous, it was definitely a little tamer than we're used to seeing Swift these days. It was less cutting-edge and way more classic, proving that as her superstardom has grown, so has her willingness to take fashion risks. But experimenting and changing up her style so frequently is part of what keeps us so obsessed with her, right?

Here's hoping she shows up on Sunday and totally slays the red carpet.

More like this
Doja Cat Wore Surrealist-Inspired Schiaparelli To The BBMAs
By Dominique Norman
Joe Alwyn Reacts To Taylor Swift Earning An NYU Doctorate In A Rare Interview
By Jake Viswanath and Nicole Pomarico
Harry Styles Addresses The Theory That His New Song "Daylight" Is About Taylor Swift
By Jake Viswanath
The Very Best Quotes From Dr. Taylor Swift’s NYU Graduation Speech
By Grace Wehniainen
Get Even More From Bustle — Sign Up For The Newsletter