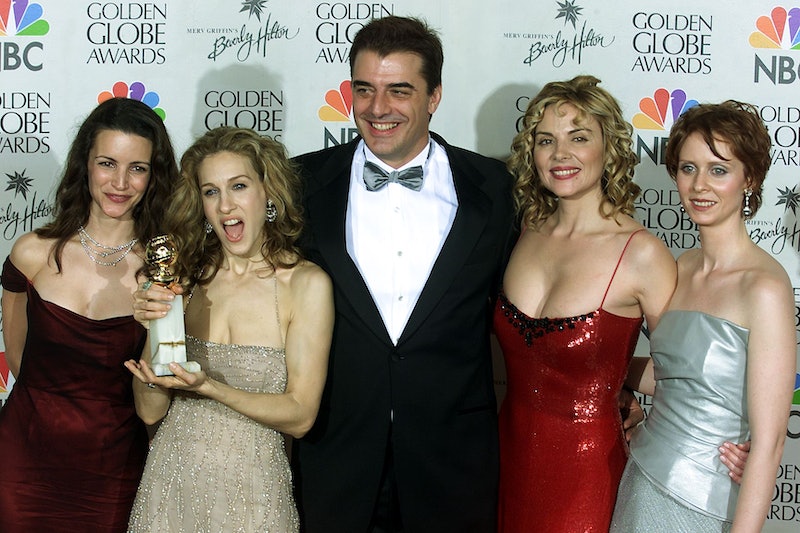 As a relatively new New Yorker, there's basically no show more iconic to me than Sex and the City. In high school, I got hooked on the late-night reruns, and by the end of college, I'd watched the entire series from start to finish — twice. The characters (especially Carrie) are known for their sometimes-wacky fashion choices, but in real life, the actresses are just as stylish as their counterparts. Since the show is on Sunday, I rounded up the best Sex and the City Golden Globes red carpet looks and took a trip down memory lane.

Sex and the City ran for six seasons, starting in 1998 and finishing up in 2004. During that time, Sarah Jessica Parker was nominated all six times for the category Best Actress — Television Series Musical or Comedy. She picked up that award four times. Amazing, right? The show was also nominated for Best Television Series — Musical or Comedy five times, and it won three times. Over the course of the six seasons, Kim Cattrall, Cynthia Nixon, Kristin Davis, Chris Noth and John Corbett were also all nominated for Golden Globes for their roles. All those nominations obviously included some fab red carpets outfits, so here are some of my favorites from the SATC cast.

This was the first year (of three) that the series and Parker both one in their categories, and her obvious surprise and delight is so refreshing. I love that she wore her hair curly (in an homage to Carrie, naturally), and her nude beaded dress is so glamorous.

This was my favorite look Nixon wore during the series' run. She stuck with a classic black strapless dress, but the sheer bottom half keeps it interesting.

This was the third time the series received the award for Best Television Series — Musical or Comedy. I love Kristin Davis' silver and black dress, SJP's adorable bow, and how much Kim Cattrall stands out in that orange number.

As someone who firmly believes Samantha is the funniest character on the series, I love that Cattrall received the award for best supporting actress in 2003. Even better? Her gorgeous red gown, which is totally timeless. I can see someone wearing a similar dress on the 2016 red carpet.

This was the first year Kristin Davis was nominated for her role as Charlotte in the series, and I absolutely love her romantic peach gown. SJP's girly charcoal grey look is adorable too, and one of my personal favorites she's ever worn.

Both stars looked totally elegant in 2005 at the awards. I love the matching plunging necklines and special details on both their dresses.

Yes, she's in the cast photo earlier for this year. But I had to highlight Cattrall's orange bodycon dress separately. I love when a star makes a bold color choice, and this one just works.

If I'm highlighting Kim Cattrall, I've got to highlight Kristin Davis' look from 2002. Both actresses broke out of the black-dress mold, and I love the silver top on Davis'.

Red carpets are typically the place for long gowns, so I love that Parker chose this midi-length champagne-colored frock. Her loose waves keep the rest of the look simple and elegant.

As hard as it is to believe it's been more than 10 years since SATC went off the air, these throwback looks makes it feel like yesterday. I don't know about you, but I'm inspired to queue up some SATC reruns tonight.

More like this
5 Mini Skirt Outfits To Wear, Inspired By These Brave Souls
By Avery Matera
The Most Extra Party Girl Beauty Looks From The Early 2000s
By Paris Giles
All The Early 2000s Hairstyles Rihanna Wore In A$AP Rocky's "D.M.B." Video
By Olivia Rose Ferreiro
Cameron Diaz Just Recreated *That* Iconic 'There’s Something About Mary' Scene
By Rachel Mantock
Get Even More From Bustle — Sign Up For The Newsletter