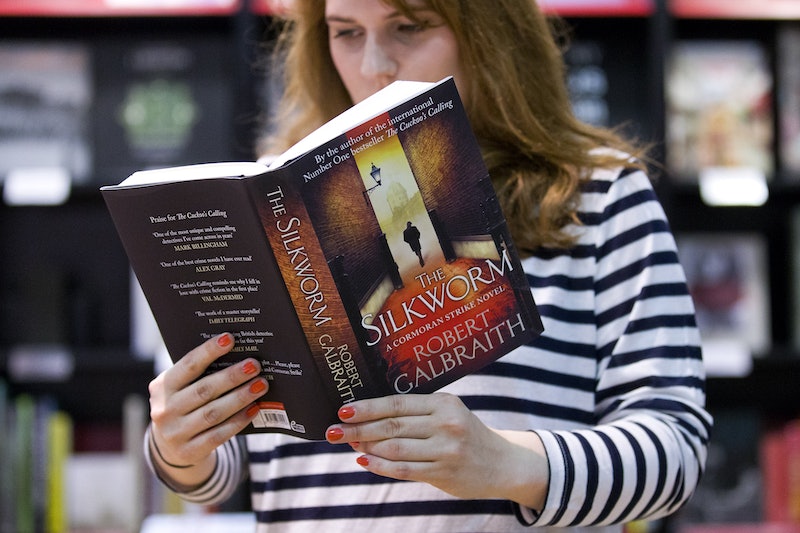 I am a fickle reader. I adore genre fiction, but I rarely find a series that can hold my attention; I cherish complex contemporary novels, but sometimes I'm just looking for something a little less demanding. Like so many others, for more than a decade, the only man who could meet my fictional needs in the bubble bath or on the beach was Harry Potter, but these days I have a new go-to guy: Cormoran Strike — ex-military private investigator with a heart of gold and a case load ripped straight from the (fictional) headlines.

Now, before you throw up your arms and curse my name, let me be clear: I would never give up on the world's favorite wizard entirely. In fact, I stuck close to home with Cormoran Strike given that the author — one "Robert Galbraith" — is in fact none other than J.K. Rowling herself. Yes, you read that correctly — J.K. Rowling is the author of a detective series, and it is absolutely spectacular. So, Harry Potter fans, while I would never ask you to give up the beloved series (blasphemy!), I can offer you nine good reasons why you should give the Robert Galbraith mysteries a chance to change your life.

1. The Fight Between Good and Evil is Back in Print

If you've been feeling lost since Lord Voldemort met his very timely end and you're looking for a battle between good and evil to invest in once again, look no further than the Robert Galbraith mysteries. With all the anti-heroes parading around out there (and you better believe I'm looking at you Walter White), simply keeping track of who you should be rooting for can become altogether exhausting, but with Cormoran Strike you always know exactly where you stand.

2. J.K. Rowling Takes Genre to the Next Level

With J.K. Rowling (aka Robert Galbraith) at the helm, what you see is never exactly what you get. On the surface Harry Potter seems like your traditional fantasy series, but once you dig in it's not hard to see that the seven-part story is anything but ordinary. If you like your genre fiction with a little extra oomph, you won't regret taking a chance on Cormoran Strike. Although the Galbraith mysteries are packaged like a prototypical mystery novel, they are so much more than mere gumshoeing.

3. You Need a Little Mystery in Your Life

Let's face it, living life as a muggle gets old fast. Without a little magic to get you through the daily grind, you're going to need a solid puzzle to solve. So, until that Hogwarts owl arrives with your letter of acceptance, crack open a Cormoran Strike novel and lose yourself in the pure unadulterated pleasure of cracking the case — I like to think that's what Harry would do.

4. What's Not to Love About a Little Good Old-Fashioned Detective Work?

Much like charming witches, righting the world's wrongs takes so much more than clever wand-work. Although I personally would kill to be able to open any lock with a simple spell, fighting crime the old-fashioned way is all the more gratifying for the effort you have to put in along the way. Sure, it might take a little longer, but when you follow Comoran Strike on a case you actually stand a chance of solving the mystery before he does.

5. Robin Might Just Fill the Hole in Your Heart Hermione Left Behind

You can keep your Katniss Everdeen, your Arya Stark, your Tris Prior and your Cassandra Clare — I'm team Granger all the way, and I'll be honest, it's been tough living without a new Hermione hit for nearly a decade. If you too find yourself struggling to fill the Hermione-shaped hole in your heart, you need Robert Galbraith more than you know. With lightening quick research reflexes and an unbreakable moral compass, Strike's stalwart assistant Robin Ellacott might just be the new Hermione.

6. You've Graduated from Hogwarts and It's Time to Get Out into the Real World

As enticing as those Halcyon Hogwarts days undoubtedly are, everyone has to graduate at some point, and if you were with Harry from the beginning, let's face it — it's time to get out into the real world. Sure, you could ease your way into an adult life, but why throw caution to the wind and wade right into the deep end with the seedy, sultry, altogether-R-rated Robert Galbraith mysteries.

7. Now's the Time to Hone Your Crime-Fighting Capabilities

You might not have a lightening-shaped scar to mark you as a wanted man (or woman), but that doesn't mean that evil isn't coming for you; we all have our demons to contend with. If you're going to stay at your fighting weight — primed and ready for whatever comes your way — you're going to need to practice, and a few rounds with Cormoran Strike should be just enough to keep you in shape.

8. It's Time to See London from an Entirely New Perspective

Sure, you've visited Diagon Alley and Platform 9 3/4, but how much has the Harry Potter series really taught you about London proper? If you're ready to see London in a whole new literary light, you can't do better than a Cormoran Strike mystery.

9. Be Honest — You've Missed Living on the Edge

Once you've survived the search for Horcruxes and the Battle for Hogwarts, it can be tough to eek enough excitement out of daily life. If you're looking to live on the edge once again, pull up a chair, poor yourself a hot mug of tea, and get ready to scrape through some very tight spots with Cormoran Strike.