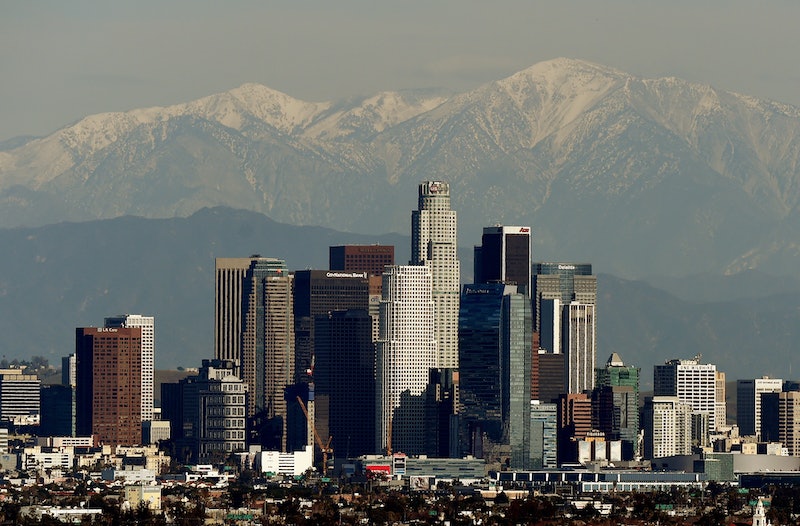 On Wednesday, New York City Mayor Bill de Blasio raised the minimum wage for city employees to $15 an hour, which will be implemented by 2018. About 50,000 workers will benefit from the pay hike, mostly union and non-profit workers on contract with the city, as most of New York City's 300,000 employees already make at least $15 an hour, according to officials. This increase will make a drastic impact on New York City residents, but it's still not among the U.S. cities with the highest minimum wage requirements.

Using his executive power, New York Gov. Andrew Cuomo raised the minimum wage for state employees to $15 an hour in November, which will also take effect by the end of 2018. "There is no immediate step to confronting inequality that would be more powerful than raising the minimum wage," Mayor de Blasio said in a statement at the time, praising Governor Cuomo's decision.

Now, New York City is following the state's lead as part of the city's efforts to move 800,000 residents out of poverty in the next 10 years. "We're going to be able to do that now for 50,000 employees, which means thousands and thousands of family members will be affected as well," de Blasio told WNYC.

However, the state's overall minimum wage — for workers that don't work for the state or New York City — only increased to $9 an hour Dec. 31. So, the entire city won't benefit from the $15 minimum wage hike until it's extended to everyone.

Here's a look at the cities with the highest minimum wages in America that show up New York City and the rest of the nation.

In June, Los Angeles Mayor Eric Garcetti signed a bill raising the city's entire minimum wage to $15 an hour by 2020. Once in full effect, Los Angeles will be the biggest U.S. city with an overarching minimum wage of $15. In comparison, the federal minimum wage is currently $7.25 and California's was just bumped up to $10 an hour.

Seattle became the first U.S. city to pass a $15 minimum wage in 2014. Like the other cities, the plan will be implemented over time, with the first pay increase taking place in April 2015 and the next in January 2016. Large employers who don't pay for employees' medical benefits must pay the $15 minimum by January 2017, large employers that do cover medical benefits have until 2018, and smaller employers with 500 or fewer workers have until 2021.

In November, San Francisco also enacted a $15 minimum wage for the entire city, and employers have until 2018 to comply. San Francisco Mayor Edwin Lee said in a statement at the time: "I grew up washing dishes in my family's restaurant. I know firsthand that a few dollars more an hour can make a difference in the lives of hardworking families struggling to afford our City."

If you're starting to see a trend here, you're spot on — most cities with high minimum wages are on the west coast. Oakland, California raised its minimum wage to $12.55 on Jan. 1, up from $12.25 (which was already pretty high compared to the rest of the country).

More like this
How The City Healed Five Years On From The Manchester Arena Attack
By Ella Glover
How To Support Gun Control Reform Right Now
By Morgan Brinlee and Carolyn Steber
The Church Of Scotland Votes To Allow Same-Sex Marriages
By Sam Ramsden
What Is Mandy Moore’s Net Worth?
By Hugh McIntyre
Get Even More From Bustle — Sign Up For The Newsletter