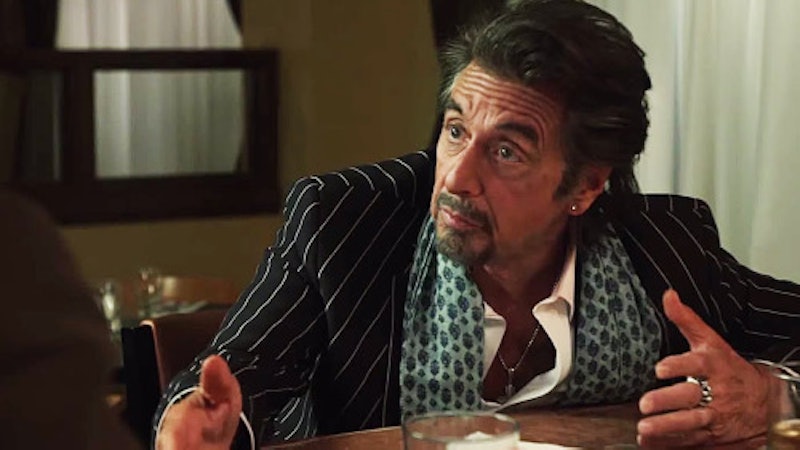 With the 2016 Golden Globes coming up on Jan. 10, it's time to get our butts in gear, so we actually know something about these movies before our award show parties and so we can look smart in front of our friends. So, first on the list — is Danny Collins a real person? Danny Collins, of course, is the character that Al Pacino plays in the movie of the same name, which came out in March 2015, and for which Pacino was just nominated for Best Leading Actor in a Comedy or Musical Film. Danny Collins is about an aging 1970s musician who discovers, 40 years after the fact, that John Lennon sent him a letter that had never been delivered. Once Collins reads it, he decides to completely turn his life around, letting go of his hard-partying ways and reaching out to the son he walked out on, played by Bobby Cannavale, who's now grown up, with a wife, Samantha (Jennifer Garner), and a 7-year-old daughter Hope (Giselle Eisenberg) of his own. Since Danny Collins is supposedly based on a true story, is Danny Collins himself a real-life person?

Well, yes and no. He is based on a real person, but that guy's name isn't Danny Collins; it's Steve Tilston. Tilston is a British folk singer-songwriter who, at age 21, when he was coming up in the music scene, gave an interview to a magazine called ZigZag (not TIME , like it was in the movie), about how he feared getting famous might adversely affect his music. John Lennon really did read that interview, and he really did write a letter to Tilston, including the following passage:

Being rich doesn't change your experience in the way you think. The only difference basically is that you don't have to worry about money - food - roof - etc, but all other experiences - emotions - relationships - are the same as anybody's.

Lennon also included his phone number, encouraging Tilston to call him sometime to discuss the subject further, but, since Lennon had sent the missive to the ZigZag offices instead of Tilston directly, it never reached its addressee, and was instead sold by someone within the office. It stayed missing for 34 years — a slight deviation from the 40 presented in the film — until, in 2005, an American collector in possession of the letter called Tilston to confirm that he was its subject. And that was the first he'd heard about it.

Beyond that, there aren't a ton of similarities between Danny Collins and Steve Tilston, chiefly because Tilston never got well-known enough to fall into the life of drugs and alcohol that takes down Collins in the film. Tilston did have children — two — but was never estranged from them like his cinematic counterpart. Instead, Martha and Joe Tilston followed in their father's footsteps to become musicians themselves. Which is excellent news, because it means Tilston never fell into the trap that he predicted for himself, or the one the movie warned of. Instead, he's had a quiet, steadily-successful career spanning four decades, and the only thing he ever really missed out on was a conversation with John Lennon. Total bummer, but as we see in the Al Pacino film — could've been way worse.