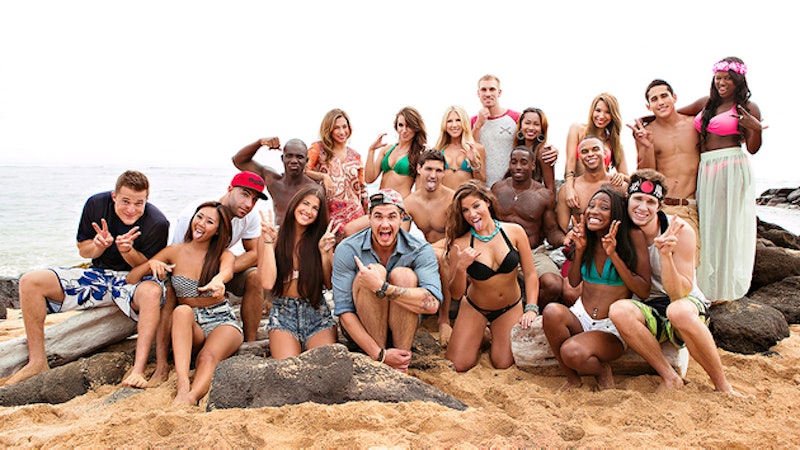 If your perfect match was standing in front of you, would you know? That's the premise of MTV's new dating show , Are You the One , which premiered Tuesday night. It is officially the best dating show on TV, and if you haven't started, you should catch up now before next week. Twenty single men and women are sent to a mansion in Hawaii, where they are told that their perfect match is on the island. They're given 10 tries for all 10 couples to find the person they were meant to be with (through a "unique dating algorithm," mind you). If the group collectively finds the person they're supposed to be with, they get to split $1 million. And if not, they walk away with nothing, save maybe a few one night stands and some digits.

But we viewers will cherish their memories, and here's why:

1) The show is impossible to win. Think about it: you have a a group of beautiful, drama-obsessed people together, all of whom are playing the field. If one person decides to trust her judgement rather than what a computer thinks, they all lose.

2) You get to hear some of these zingers, which are horrifying or just plain ridiculous:

"I'll send a dick pic to a girl only if she doesn't want it. 'Cause that's more fun."

"You gotta slay a couple of dragons before you get to the princess. It's just how it works."

"'Aw that's a black chick,' that's what I thought right away. Could have been your skin."3) The challenges are very "sexy," and that's just based on the premiere's first one. Everyone is instructed to take selfies of certain body parts and have members of the opposite sex guess what part belongs to which person. They'll probably become more scandalous as the series continues.4) Truth Booth! The Truth Booth confirms whether a couple is match or not, and the losers of the challenge get to decide which pair goes in. If a couple is the right match, then they get to move out of the house and spend the time exclusively with each other. If not, they're forced to reenter the house and look for their "real" match, before the matching ceremony at the end of the episode.The show tries to prove that your gut instinct isn't always right. We'll see how it turns out.Image: MTV

More like this
We’ve Got A Text! Another 'Love Island' Series Is On The Way
By Darshita Goyal
Why Wasn't Teddi At The 'Bachelor In Paradise' Reunion?
By Brad Witter
'Love Island's Gemma & Luca Have Very Different Ideas About Their Break Up
By Frances Stewart and Sophie McEvoy
Billie Eilish Has An Exciting Relationship Update About Her Boyfriend
By Grace Wehniainen
Get Even More From Bustle — Sign Up For The Newsletter